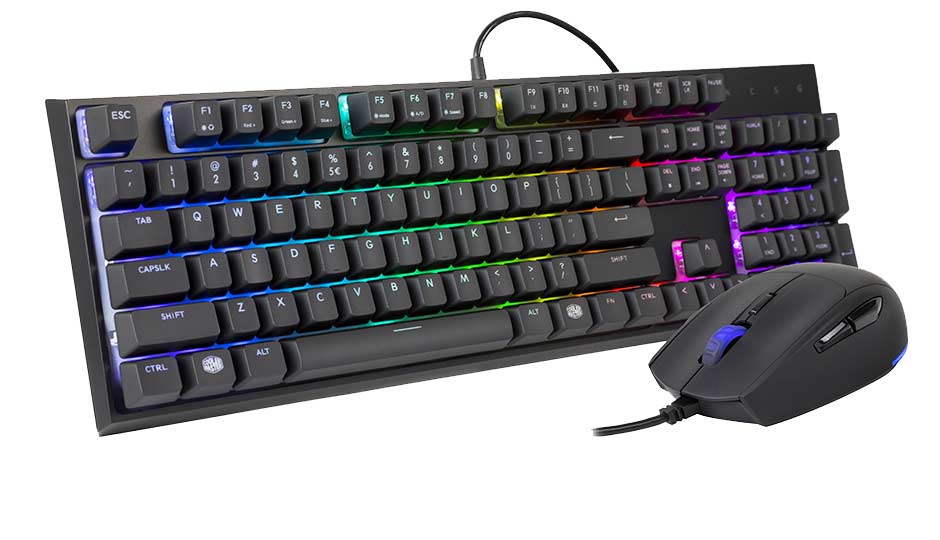 The MasterSet MS120 mouse surprisingly achieved a high sensor performance considering the A3050 sensor. We noticed minor spikes a few times but they weren’t big enough to affect the scores. The performance is persistent at all the CPI levels on the mouse except at 3,500 where it loses tracking at speeds above 1.8 m/s. Hence, it’s advisable to play on the other CPI levels where it manages to continue tracking even above 2 m/s. We didn’t notice any acceleration on the mouse but angle snapping kicks in at 1,500 and 3,500 CPI. Apart from performance, it’s a barebones right-handed mouse with an average build quality and a resting area for your ring and little finger on the right side.

Cooler Master upgraded their older 2016 mem-chanical design by adding a spring and tactile plunger in the MS120 keyboard. Essentially, this design will offer better tactile feedback. For us, the actuation force was considerably heavier, almost close to Cherry MX Greens. Hence, we didn’t really enjoy the experience of typing on this keyboard. But this is completely a personal preference coming from an experience of using keyboards with lighter actuation forces. If you’re coming from membrane keyboards, you will actually enjoy the tactile feedback. The RGB backlighting on the keyboard looks wonderful and overall, the build quality is decent. There’s no software support and everything can be controlled by modifier keys on the keyboard. Compared to the other combos that we’ve tested, if you have a budget of about Rs. 6,000, then you can go ahead with the MS120. However, if you have a lower budget, then the Gamdias Ares Essential Combo is still worthy at Rs. 3,000.

Earlier, you had to considerably empty your wallet in order to buy a mechanical keyboard. This has been changing for the past two years, especially the last year where we got to see mechanical keyboards in the budget segment. It’s likely that if you’ve been gaming since your childhood, you might have done most of it on membrane keyboards. To bring in the tactile feel of mechanical keyboards many keyboard manufacturers have been trying to offer hybrid solutions. One of them is Cooler Master who has been promoting their line of mem-chanical switches for some time now. Essentially, they are membrane keyboards with extra parts over every key to introduce tactile components present on mechanical switches. Lately, the prices of mechanical keyboards have dropped after knock-off switches were adopted by manufacturers. This only means that the prices of these hybrid solutions will go down otherwise they aren’t going to last on the market. The Cooler Master MasterKeys Lite L Combo RGB paired a great keyboard with an average mouse. But with the MasterSet MS120, they have surprisingly delivered a great mouse in the bundle, in spite of using the same optical sensor. Let’s have a closer look at the MasterSet MS120 keyboard and mouse combo from Cooler Master. 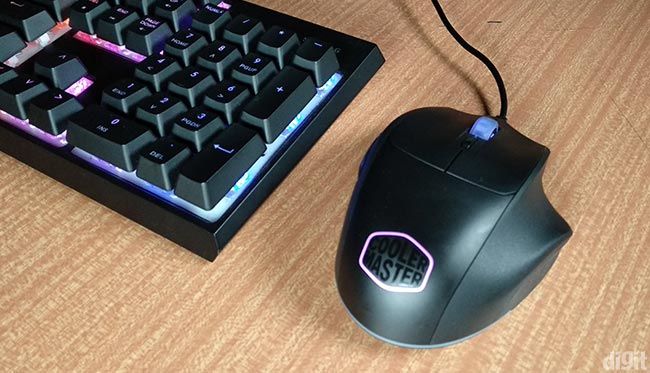 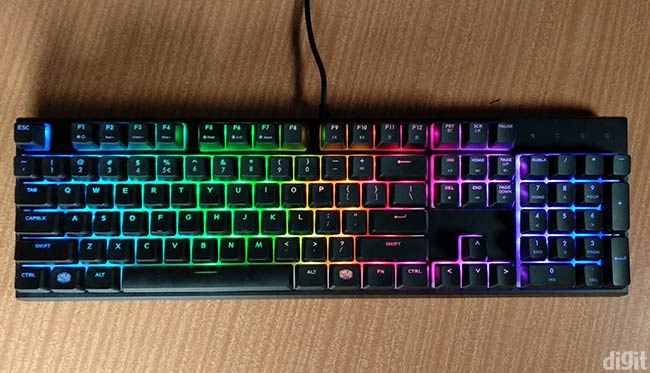 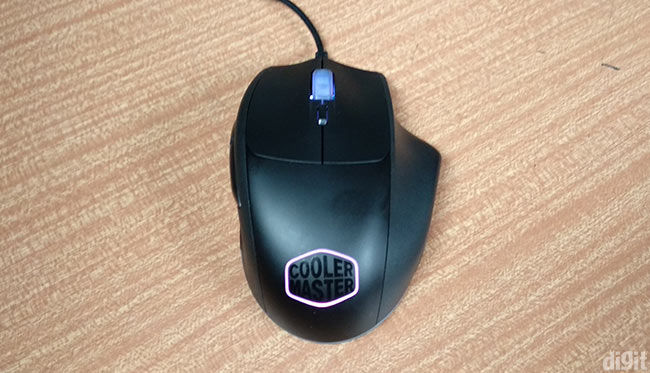 The combo isn’t meant to be a powerhouse in features, especially the mouse. It does cover all the features required for gaming and typing. The top highlight of the keyboard is the new mem-chanical switch design from Cooler Master. Earlier, the switch had the tactile component situated on the base in the form of a tactile dome. When the key was pressed, the plunger would push on the dome and give you the tactile feel. The updated design brings the tactile component to the plunger itself and a spring is also added below it. The tactile feedback component is almost similar to the design in mechanical switches, and it can be seen in action if you remove the keycap. This entire assembly does manage to offer the same feedback present on mechanical keyboards but if you’ve used one before, you would be able to make out the difference instantly. Coming to the illumination of the keyboard, it packs RGB backlighting which can be controlled using modifier keys. The direction and speed of the eight lighting modes can be changed easily. In the static colour mode, you can switch through different levels of Red, Green and Blue, individually so that you can have different colours. It includes a Windows lock and a Full Key lock. The keyboard will be able to register up to 26 key presses at once so you don’t need to worry about missing out on keystrokes. There isn’t much to talk about the mouse apart from its four DPI levels that can’t be changed. The scroll wheel zone is said to support RGB lighting but it only lights up in four colours based on the four DPI levels. 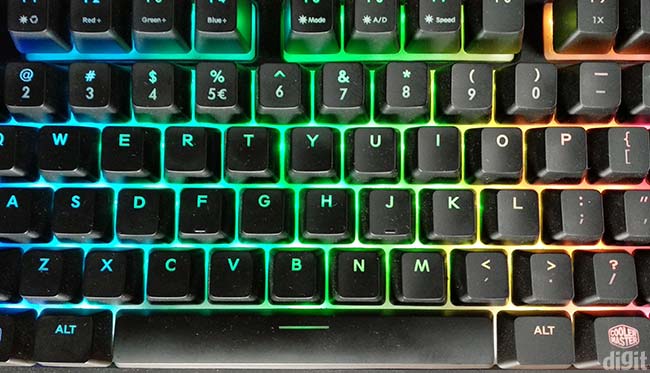 The MasterSet MS120 keyboard is built pretty well and it follows the same design seen on the MasterKeys Lite L Combo RGB keyboard. The only difference is the switch design underneath. Membrane keyboards tend to have a lifespan below 10 million keystrokes. The MasterKeys Lite L keyboard used the 2016 mem-chanical switch design which had a lifespan of 12 million keystrokes. By changing the design and introducing more components, the switch on the MasterSet MS120 claims to last for 50 million keystrokes. That’s quite a bold claim since it’s equivalent to the lifespan of actual mechanical switches. Below the switches, a white plastic sheet ensures that the backlighting looks brighter. 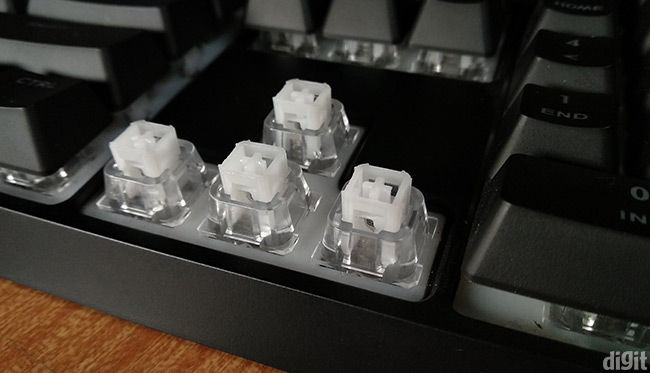 The chassis of the keyboard is made of plastic, following a minimalist rectangular design. Cooler Master has continued the same neutral font on this keyboard as well. One of the aspects in build quality we look for in mechanical keyboards is the quality of the keycaps. While most of them are made of ABS plastic and are laser-etched with the symbols or alphabets, some keyboards in the budget segment are shipping double-shot keycaps. The MasterSet MS120 doesn’t go for double-shot keycaps but the keycap stem is thick enough, more than what some mechanical keyboards incorporate at a higher price. 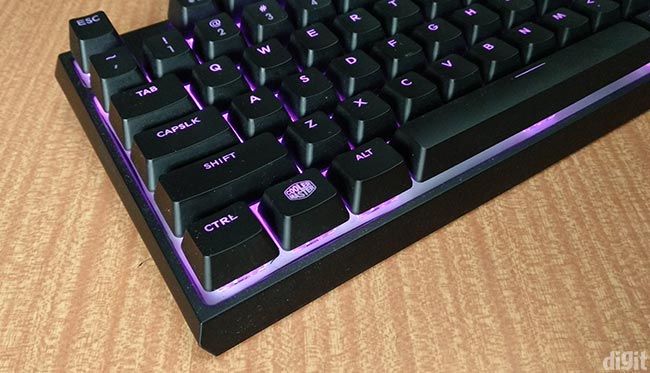 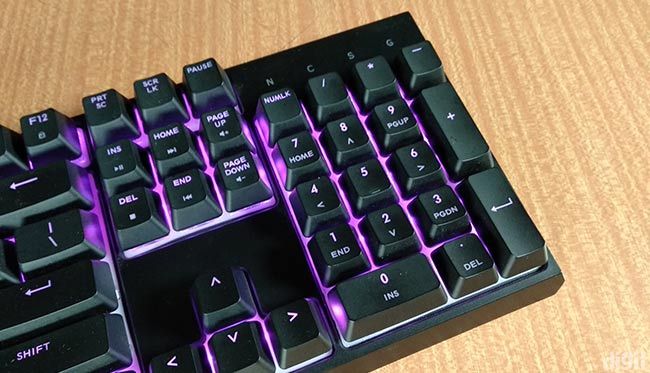 There’s a basic plastic coating over the mouse with a rubberised strip for the little finger. It’s build for right-handed gamers and best suited for palm grip users, thanks to the grooves on the right side. The scroll-wheel has distinct steps and it doesn’t rattle while moving the mouse. The curves on the mouse are well thought out for a great ergonomic feel while holding the mouse. The thumb sits perfectly below the left edge with the forward and backward buttons just above, making them easier to reach. The cable is flexible enough and for reference, the Zowie FK2’s cable is more flexible. 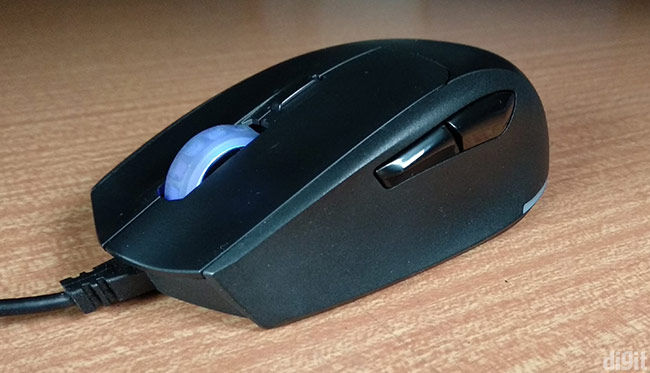 Taking a look inside the mouse revealed that the A3050 optical sensor was housed on the main PCB while another PCB mounted on top had the RGB LED and DPI micro-switch. The top part of the mouse’s body holds a small metal slab that can be removed if you want to reduce some weight. 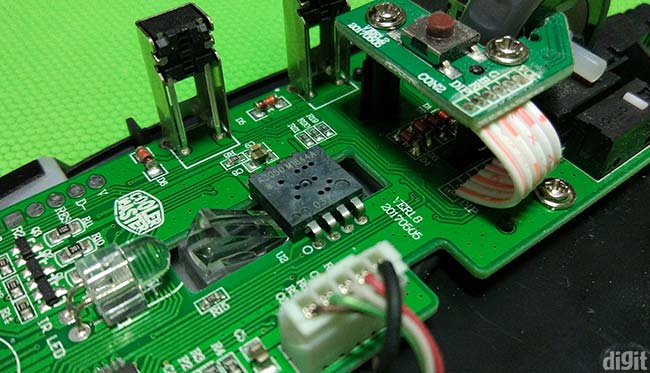 The right and left clicks use the Omron D2FC-F-7N micro-switches and they have a comfortable actuation force. However, the forward, backward and DPI buttons have a heavier actuation force. 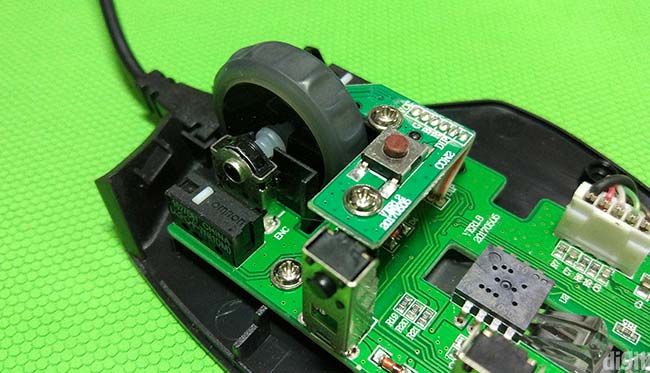 MasterSet MS120’s new switch design does take the keyboard one step closer to a tactile and clicky switch like the Cherry MX Blue. Whether it was gaming or typing, our experience was positive throughout. The switches are smooth but the actuation force feels a lot heavier than Cherry MX Blues, almost close to their Green switches. This also means that typing on heavier switches will likely cause finger fatigue sooner. It’s completely based on personal preference whether you like heavier or lighter actuation forces on your mechanical keyboard. So, if you’re more accustomed to using linear switches like the Cherry MX Reds, then you might not enjoy using this keyboard. Whereas if you love clicky and tactile switches like the Blues, then you might like typing on the MasterSet MS120 keyboard. The tactile bump on this one is more prominent from their previous design. However, it would be wiser to try out both the older and newer design before making a buying decision.

Having tested the A3050 optical sensor on previous mice, we weren’t expecting anything great from this one as well. But it seems like the calibration has been done pretty well in this mouse. The CPI steps aren’t true to the four levels denoted in the specifications and since there’s no way to change them, we had to test the mouse in those four presets. Acceleration wasn’t observed in any of the CPI levels. However, angle snapping kicked in at 1,500 and 3,500 CPI. Those two levels aren’t really preferable for gaming, so you don’t really need to worry about them. 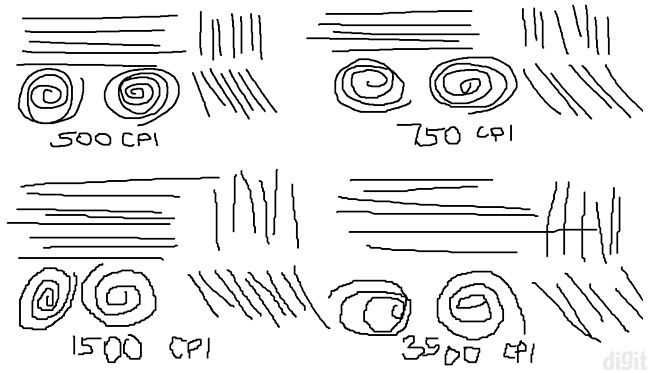 The sensor has a high lift-off distance of three DVDs in thickness or 3.6mm. If you’re one of those who tend to lift the mouse a lot while playing games, then you might face issues. Speaking of tracking performance, the mouse surprisingly scored the highest until now in our Enotus Mouse Test, indicating that the tracking accuracy and smoothness in the reporting rate are superior. Consistent tracking accuracy was confirmed in our MouseTester benchmarks at every CPI level except 3,500. At this CPI level, the mouse mysteriously loses tracking once it crosses 1.8m/s as displayed in the third graph below. 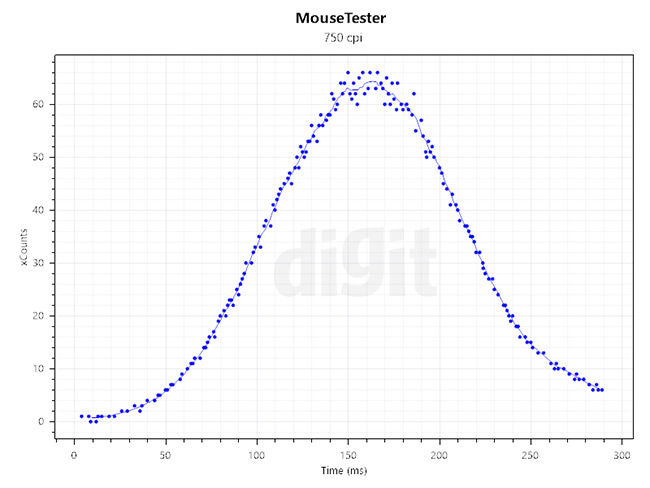 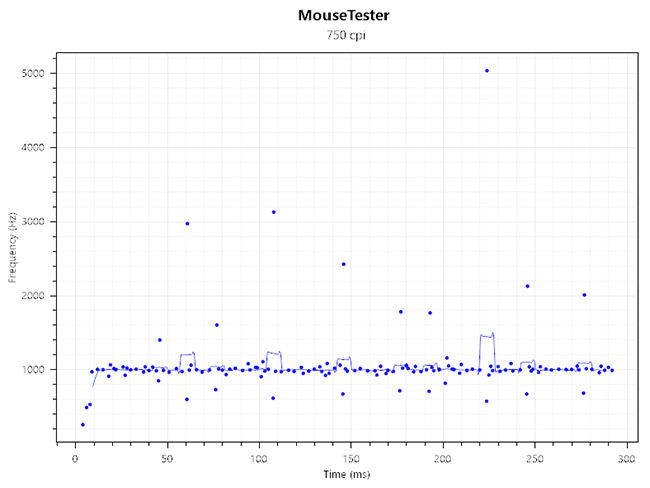 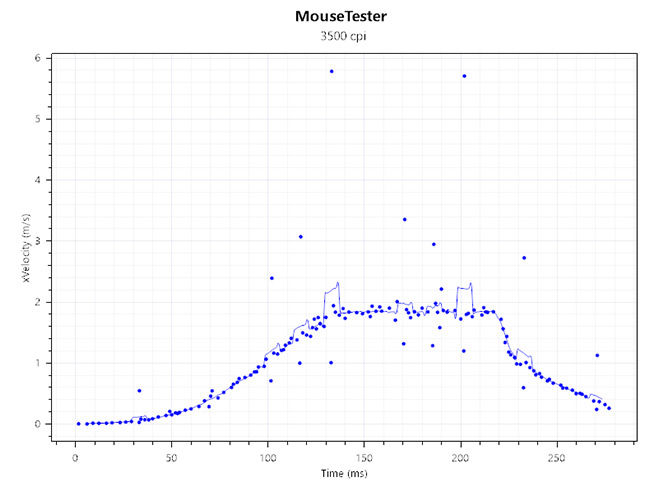 Overall, the mouse is well-suited for playing FPS games and you won’t miss out on those headshots.