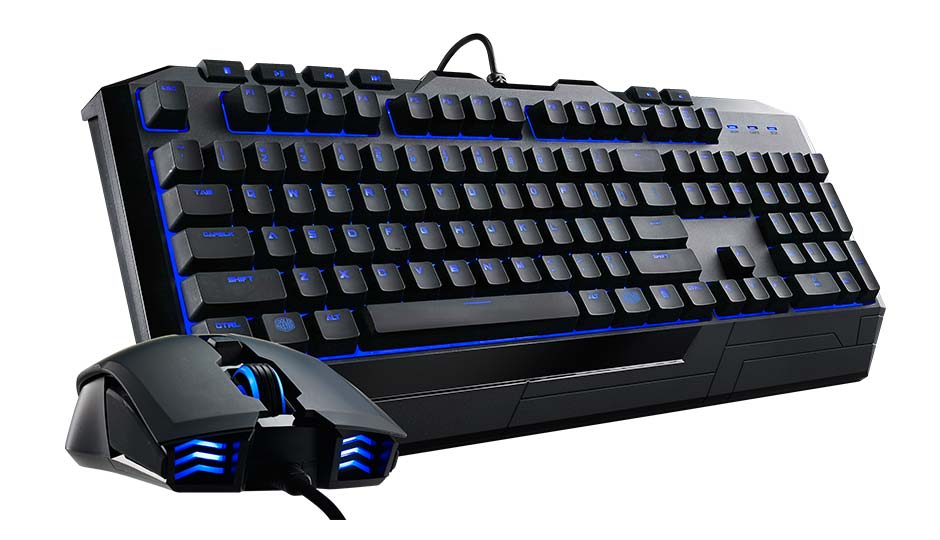 The Devastator II is available on online stores at a price range of Rs. 3-4k. Considering the not so great performance of the mouse and low feature set on the keyboard, we wouldn’t recommend this combo for this price. The keyboard is fine for gaming and we had no problems in typing. On the other hand, the mouse performs poorly in both, our objective and subjective tests. At such a low price, we wouldn’t expect sensors to track well at high surface speeds, but spin outs and jittering are unacceptable. Instead of this bundle, we would recommend you to spend some extra money and get the Cooler MasterKeys Lite L Combo RGB. If you’re stuck with a tighter budget, then you look at the Zebronics Max for the keyboard. For the mouse, if you’re keen on getting a Cooler Master mouse, then go for the MasterMouse Lite S or you could go for something cheaper like the Logitech G90 or G100s (if available).

Gamers looking for peripherals under a budget usually settle for keyboard and mouse combos. Often, you’d end up with both a mediocre keyboard and a below average mouse. You can casually play games on them but the experience won’t be satisfying enough. There might not be issues with the keyboard but the mouse tends to malfunction. If you’re just starting off with gaming and don’t really care much about the quality for now, then combos are surely the way to go. The Cooler Master Devastator II falls in the same category.

Available in three colour variants, the Devastator II tries to capture the Rs. 3k segment by offering both a gaming keyboard and gaming mouse. We extensively tested both the products and in this review, we’ll tell whether entry-level gamers should consider buying the combo. 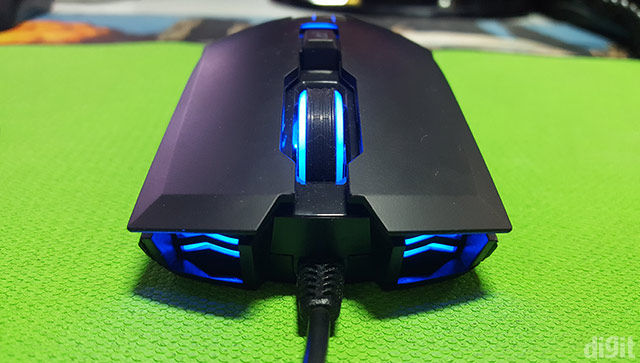 Features and Accessories
The Devastator II combo is available in three backlit colour variants – red, green and blue. The backlit colour only has an on and off setting that can be controlled with the Scroll Lock key. You won’t find any other key combination to control the brightness levels or change the lighting effects. There are multimedia buttons on top that will certainly make it easier to control the volume and music playback right from the keyboard. 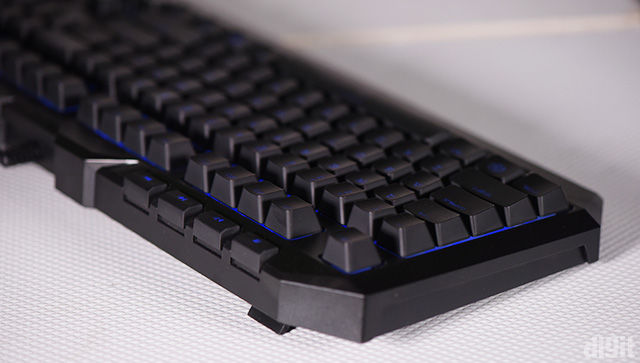 Speaking of the mouse, there’s a DPI switch near the scroll wheel that lets you switch between three DPI levels. DPI level indicators are absent on the mouse, hence you’ll have to glide your mouse to determine the levels. In conclusion, the combo doesn’t pack many features.

Build Quality
The entire chassis is made of plastic, textured at few places while glossy at others. It’s lightweight and does flex with force. The keycaps didn’t seem to have a snug fit over the mem-chanical switches. After a few hours of typing, they loosened up and we had to push them back in. We attached compatible Cherry MX keycaps on the keyboard to check whether they fit properly and they stayed on perfectly. One thing to note is that the keycaps loosen up only when you bottom out while typing. The fonts are hardly visible due to the poor lighting. The mem-chanical switches are supposed to give you a lifecycle of 12 million keystrokes. They are definitely louder than membrane keyboards and feel closer to Cherry MX Blacks even though their actuation force is the same as Reds. 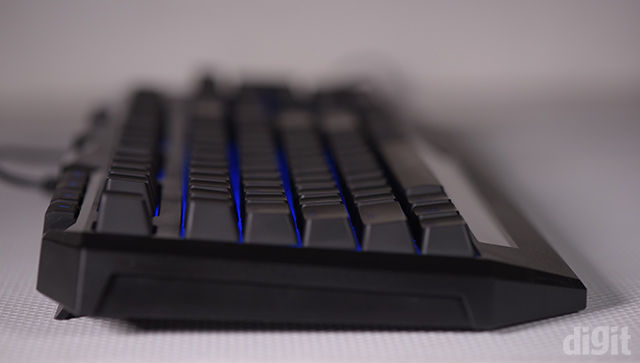 The mouse has a plastic body with rubber pads on both the sides for a comfortable grip around the width. The side buttons are stiff enough to be noticeable while the right and left clicks give good tactile feedback. The smaller area of the PTFE feet at the bottom of the mouse brings in a certain level of friction. Although, you won’t be able to notice this difference if you haven’t used smooth mice before. There was no sensor rattle nor were there any loose components inside. The cable is made of soft plastic which is flexible and can easily be managed.

Design
The keyboard has a peculiar gamer aesthetic in the main chassis. There’s a small non-removable palmrest carved on the bottom with more patterns that should have been broader. On the top of the keyboard, there are multimedia buttons while on the top right you’ll find the lock indicators. The Devastator II uses Cooler Master’s mem-chanical switches, membrane switches that give you a mechanical feel. The design includes a plunger placed over a housing on the membrane, giving you the tactile feedback. The switches are Cherry MX keycap compatible so if you have them lying around, you can replace them. 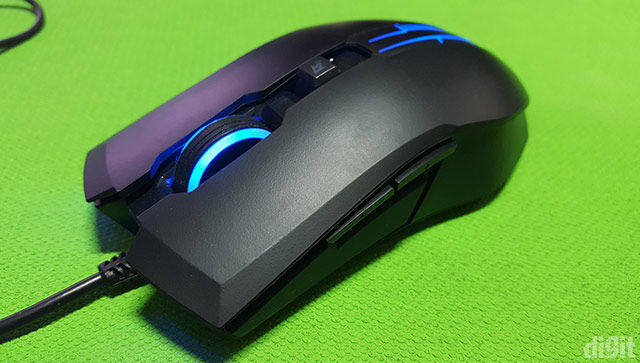 The Devastator II mouse also has the gamer design with a mean looking frontal portion and bent right and left clicks. There are two LED zones on them, one near the scroll wheel and front portion, while the other is present on the palm area. On the two sides, you’ll find rubber attached to give you a better grip. The mouse has an ambidextrous design meant for palm grips strictly. It’s difficult for claw grips because of huge bump present at the bottom. The left side of the mouse has two buttons for forward and backward, while there’s a DPI switch near the scroll wheel.

Performance: Devastator II Keyboard
Typing was a little difficult in the default setting. The palmrest isn’t large enough to comfortably place your hands. Placing an external palmrest didn’t seem to work since it resulted in too much space between your hands and the keys. Although this didn’t hamper our typing speed, it definitely would have been more comfortable. The two extendable feet hardly elevates the keyboard and after placing something beneath them, we were able to achieve a more comfortable typing experience. With the elevation sorted, we were able to achieve a maximum speed of 80 words per minute while maintaining an average of 73 words and 93 percent accuracy. For reference, our average words per minute across all the keyboards we’ve tested until now stands at around 74. So, after solving the aforementioned problem with the elevation we were able to hit our average typing speed. The backlighting on the Devastator II is poor. The translucent switch design and material doesn’t allow much light to disperse. For brighter illumination, Cooler Master needs to replace the switch design with a transparent material and have every switch house its own switch. Another way could be placing an LED above the switch, near the plunger, as seen on mechanical keyboards. Speaking of lighting effects, they are absent on the keyboard, and your only option is to switch the lights on or off. There’s no option to cycle through brightness levels.

We absolutely had no problems in gaming with the Devastator II. Quick weapon switching wasn’t a problem because of the low actuation force. Pressing the keys felt close to Cherry MX Blacks because of the resistance offered by the plunger. If you’re used to mechanical keyboards, you might possibly hate using it. Hence, this keyboard is recommended only for gamers upgrading from a flat membrane keyboard. 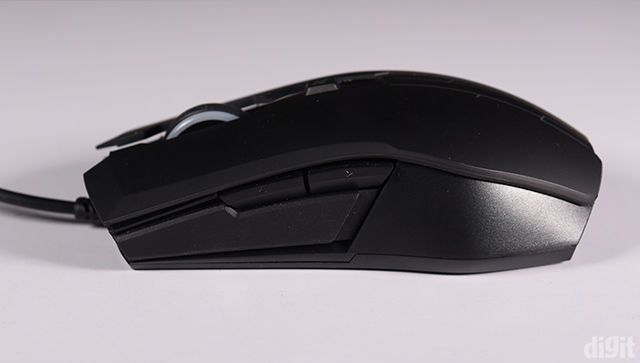 Performance: Devastator II Mouse
Beginning with the default CPI levels, the advertised ones weren’t accurate. Instead of reproducing 1000, 1600 and 2000, the Devastator II mouse showed 800, 1200 and 1600 CPI respectively in our testing. All of this was determined in MouseTester and reverified with Enotus Mouse Test. The mouse displayed a maximum tracking speed of 1.63 m/s that converts to 64 IPS (inches per second). Such a low maximum tracking speed is expected in this price range but the sensor on the Devastator II had other tracking problems as well. In our MouseTester graphs, the sensor exhibited acceleration and angle snapping. We verified angle snapping on MS Paint as well by trying to trace straight lines. The PAN3509DH sensor is also used on the MasterMouse Lite S and both scored almost the same in the sensor performance test. You can learn more about our entire mice testing process here. 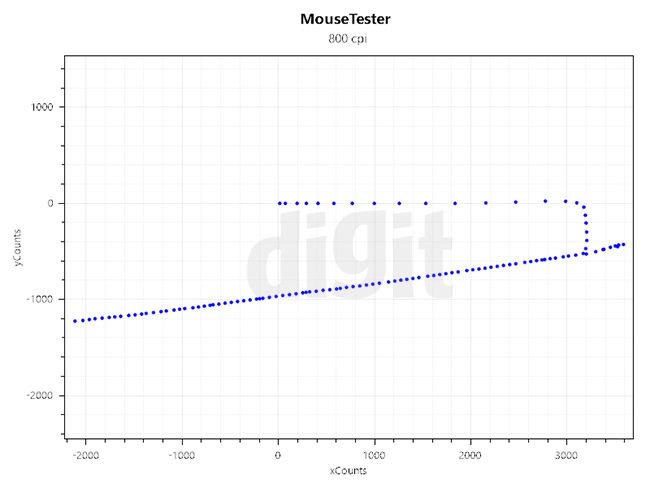 Acceleration detected in MouseTester along with spinning out 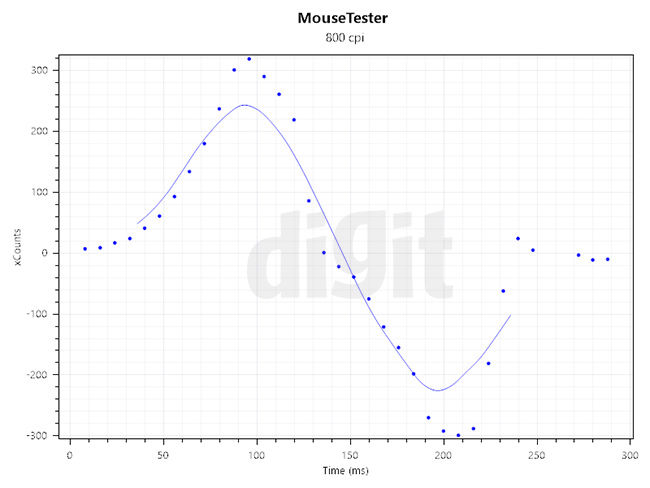 Loss of tracking at higher speeds 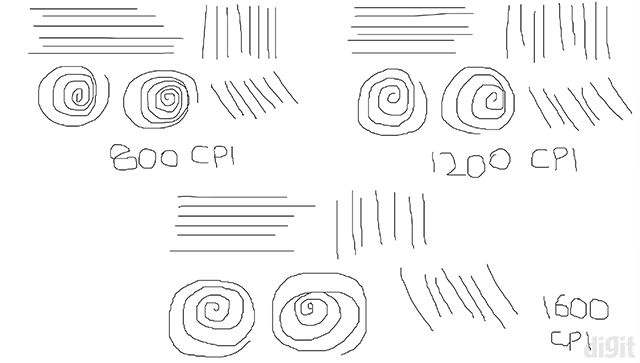 In real world testing, the mouse displayed more inaccuracies than expected. Having tested the MasterMouse Lite S, the only problem was the lower performance rating restricted by the sensor. Acceleration was visible on both the mice. The Devastator II would spin out on fast swipes and jitter while trying to move the crosshair. Whereas the MasterMouse Lite S would lose accuracy on fast swipes but wouldn’t spin out. It also never displayed any jitter or aiming inaccuracy. Both of them have the same lift-off distance but because of the inaccuracy, the Devastator II Mouse was difficult to play with. In CS: GO, running around with SMGs was no big deal but trying to aim and shoot with rifles and scoped weapons was difficult. In conclusion, the mouse is definitely not worth it if you plan on playing FPS games competitively. Every other genre where the accuracy of clicks aren’t as important, this mouse should be fine.

Final Thoughts: Cooler Master Devastator II
The Devastator II is available on online stores at a price range of Rs. 3-4k. Considering the not so great performance of the mouse and low feature set on the keyboard, we wouldn’t recommend this combo for this price. The keyboard is fine for gaming and we had no problems in typing after adjusting the inclination problem that we faced. It’s one of those subjective factors again, and if you find the inclination suitable, then you’ll find it to be a non-issue. One facet where it falls short is in the backlighting department – the brightness is too low. We’d have preferred adjustable brightness levels. On the other hand, the mouse performs poorly in both, our objective and subjective tests. The MasterMouse Lite S with the same sensor performed better in real world tests, but for some reason, the sensor in this mouse works erratically. 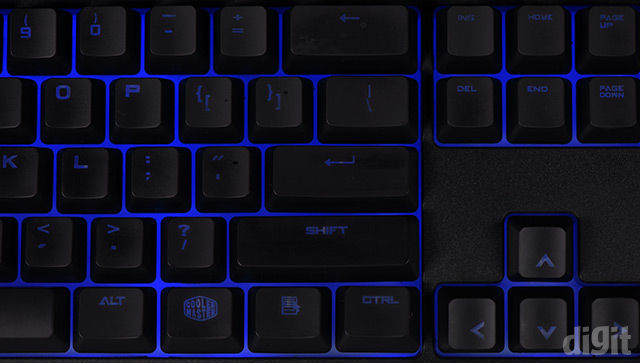 At such a low price, we wouldn’t expect sensors to track well at high surface speeds, but spin outs and jittering are unacceptable. It would have been great if the Devastator II keyboard was sold at a lower price separately so that we could opt for a different mouse. Or the entire bundle could have been priced much lower. Instead of this bundle, we would recommend you to spend some extra money and get the Cooler MasterKeys Lite L Combo RGB. We got to review this combo, and it’s definitely worth your money. If you’re stuck with a tighter budget, then you look at the Zebronics Max for the keyboard. For the mouse, if you’re keen on getting a Cooler Master mouse, then go for the MasterMouse Lite S or you could go for something cheaper like the Logitech G90 or G100s (if available). If you're still confused on which mouse to buy, you can check out our round-up of the best gaming mice you can buy in India.