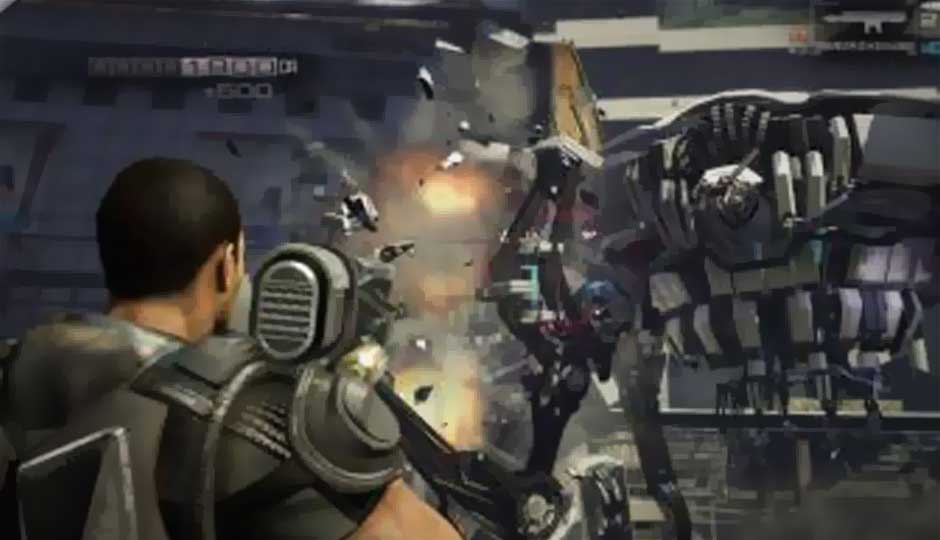 If you are in the market to pick up a third person shooter, we say take a look at the Gears of War trilogy or Vanquish along with Binary Domain before making your purchase decision.

Third person shooters are dime a dozen with just a few games such as the Gears of War and Resident Evil series standing tall in the crowd. Sticking to the tried and tested cover based shooting mixed with a few vehicle chase sequences thrown in, does Binary Domain have what it takes to leave a lasting impression or are you better off investing your money elsewhere?

Story
The story of the game is pretty straightforward. There is a conspiracy brewing between two organizations that has something to do with robots that look like humans. These robots don’t know that they are robots and think they are humans. These robots are called “Hollow Child” (more like grown up versions of Haley Joel Osment’s character from the movie AI). When disaster strikes, you, the lead protagonist, Dan Marshall are called upon to save the day along with your squad.

The plot is quite simple and does very little to keep you hooked. With the cheesy voice acting it wont be a surprise if you decide to skip every cut scene you come across. 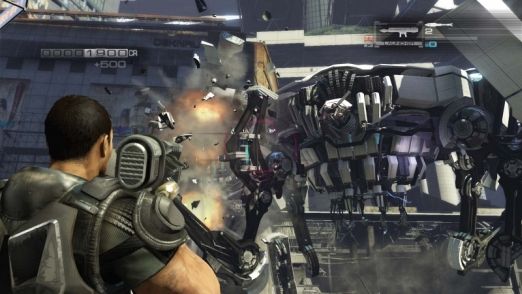 Gameplay
Put simply this is a third person cover based shooter where you will progress from point A to point B taking down anything that comes in your way with little scope for deviation. There aren’t any real puzzles thrown in to vary the pacing apart from the "pull this leaver to go there” scenario.

In terms of gunplay, you will encounter a plethora of robotic enemies on your way which you will takedown with the arsenal at your disposal. The enemies are varied in the amount of ammo it takes to take them down. The lighter infantry can be disposed off with half a clip where as the heavily armored robots take quite a few rounds before they decide to hit the ground. Kill enemies in one location and move on to the next, that’s your mission. Even though this is a repetitive mechanic, the  locations are varied enough to keep things interesting.

The robotic enemies are a nice change from the regular band of solders and aliens we have grown accustomed to. The way metal fly’s off the robots as you shoot them has some level of satisfaction to it. Even though the same lots of enemies are recycled throughout the game, the variation lies in the way you take them down.

You can shoot off their legs making them handicap in battle, dismember them or take on that clean headshot and watch the robot become a menace to his comrades. These effects are subtle and sometimes it’s hard to sit back and enjoy the spoils of your efforts in the heat of battle. 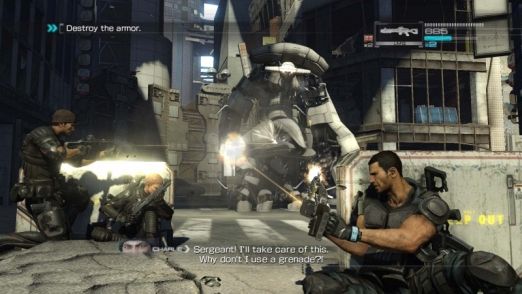 Like most third person shooters these days, Dan has the ability to carry 4 weapons - - a pistol, 2 rifles and grenades. Throughout the game, there are strategically laid out points where you can stock up on medical kits, ammo and upgrade yours abilities and the abilities of your comrades.

There is the occasional boss battle and these aren’t as satisfying as the regular gunplay. Rather they are tedious and frustrate you to a point where you will either shut down the game and walk away or destroy one of your controllers.

If you thought games like Deus EX and Ninja Gaiden required patience with boss battles, you haven’t played Binary Domain yet! The new element of gameplay in Binary Domain is the ability to issue voice command to you comrades. You can use a microphone but we preferred holding “L2” and selecting commands as barking orders in a microphone is not only silly, but the fact that the game wouldn’t get our Indian accent posed a problem as well. 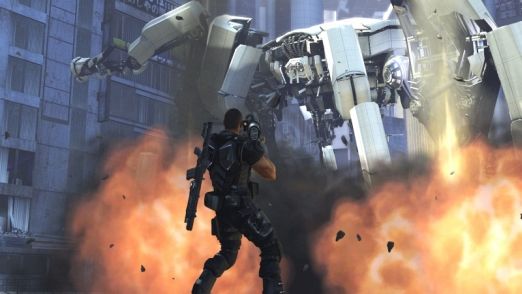 With comrades always by your side, there is a trust meter that builds up. You can choose to say exactly what they want to hear and increase their trust or engage in friendly fire and give all the wrong responses to decrease it. Either way, you actions have very little control over the outcome. The story of the game isn’t going to change depending on your actions!

There is online play in Binary Domain as well. You have standard modes like death match and Binary Domain’s own take on Hoard Mode made famous by the Gears of War franchise.

Overall, the gameplay stays true to the tried and tested formula established by third person shooters these days and there is very little addition to keep you hooked let alone keep you coming back for more. 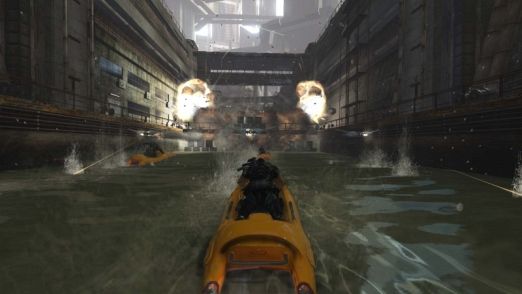 Graphics
The graphics of the game aren’t the best in its genre but they aren’t bad by any means. The sceneries and environments you visit will give you a glimpse of what Tokyo may look like in the future -- a tech-savvy futuristic city on top with some underground resistance thrown into the mix.

Even though the overall look of the game stands at par with any third person shooter what really catches your eye is how parts of the enemy robots fly off as you shoot them. In the heat of battle it is difficult to appreciate this but its present adds to the thrilling effects nonetheless. 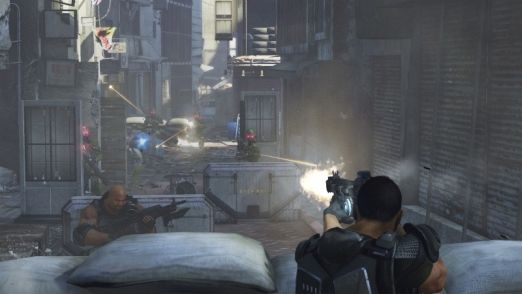 Sound
Probably the only place where Binary Domain suffers is in its audio production. There is hardly any background score for the most part and this is a good thing as the nose of bullets tearing through metal and alloy is a lot more satisfying to here. The high octave moments or chase sequence is where the music comes alive and adds to the adrenalin rush.

So why is it bad? Well all these effects are washed down the drain when the cheesy voice acting kicks in. It's hard to relate to any of the characters, the cut scenes are downright silly and there isn’t enough substance to keep you hooked for long. Did we mention some of these in game videos are very long?

Verdict
Binary Domain is your run of the mill third person cover based shooting game. There are the occasional moments in the game where you will feel like Will Smith from I Robot but the satisfying feeling of shooting down robots comes to an end when the cut scenes and cheesy voice acting comes into play. If you have a local store where you can rent games, we suggest you do that as this game will be over before the weekend and there is very little to leave you coming back for more. It’s a pleasant one-time play through.

If you are in the market to pick up a third person shooter, we say take a look at the Gears of War trilogy or Vanquish along with Binary Domain before making your purchase decision.