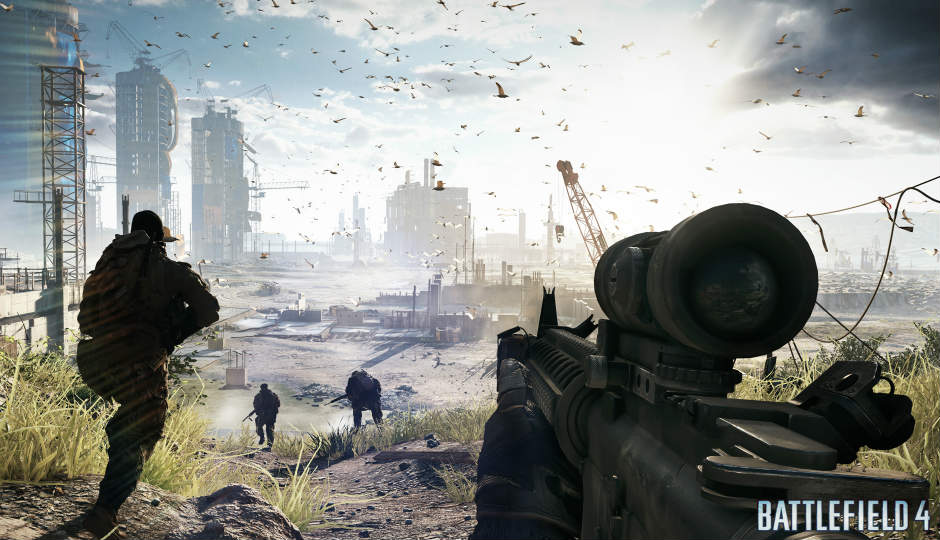 Battlefield 4 is a great game in the same way that you might consider The Expendables or Rambo (IV) to be great movies. This game tries to be the greatest blockbuster that ever was and while it does fall considerably short of that lofty goal, it's a blockbuster nonetheless and one that, despite its many flaws, you will want to experience.

Battlefield has always been about spectacle, not of the horrors of war but of the sheer awesomeness of the scale of destruction that can be unleashed at the press of a button. You’re wafted along on what EA hopes will be the ride of your life, blowing up a building here, sinking a carrier there, have helicopters come crashing down around you or staging a massive assault on an island. The game is truly awesome in its visual splendour and while it does get a bit over the top from time to time, it’s a visual extravaganza that you will revel in.

Unfortunately, with regards to the campaign, that might be all you’ll revel in. The campaign is lacklustre and yes, we’re going to talk about it. Maybe as a legacy of being “classic” PC gamers, we expect our stories to have some meat to them and we wish people would put more effort into them. Or rather, the right kind of effort. It seems pointless to care about the lives of air-head jocks who are patently moronic (and no, we’re not being too harsh) and it also seems pointless to care about yourself, as a character in the game, when you’ve got no role to actually play in the game. You’re always there when something is happening but you’re worse than a no-name entity, you’re just a grunt who mops up after your AI allies and the only time you feel like you’re doing something is when the script-writers indulgently offer you an RPG or Stinger to take out a pesky tank or chopper that your previously superhuman allies suddenly become incapable of dealing with.

Once you brush aside all that and just settle in for the ride and ignore the myriad of bugs that kept popping up from time to time (which will hopefully be taken care of in upcoming updates), you realise that Battlefield 4 doesn’t have such a bad campaign after all. In the larger scheme of things, the storyline is awful, but compared to the drivel we’ve been fed over the last few years, it actually seems rather engaging. Couple that with the spectacular visuals and you have a very decent game on your hands. 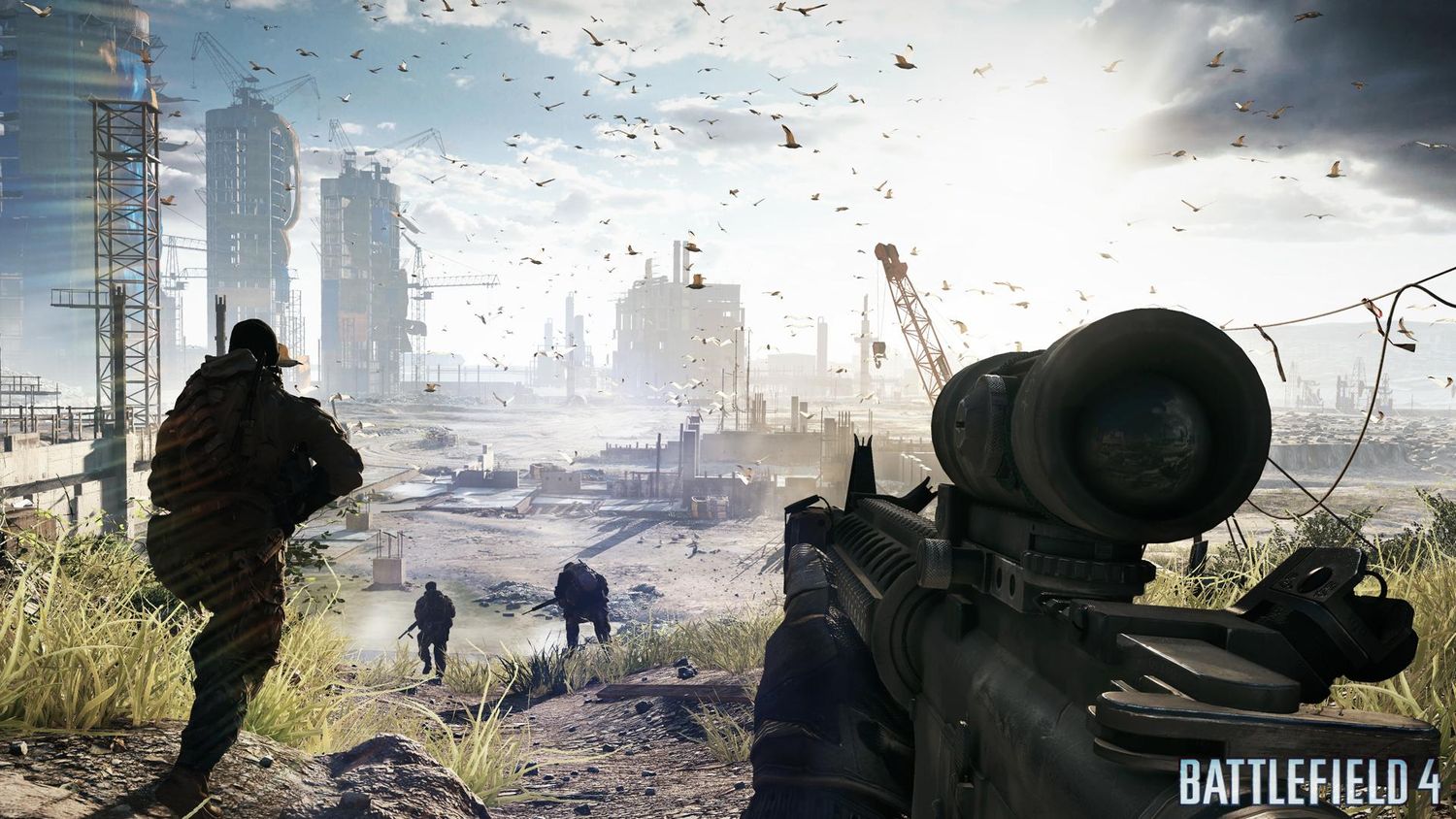 Strangely enough, it’s with the gameplay that we have more complaints than with the story. The game introduces a few new mechanics this time around, namely, designating targets for your squad with magical binoculars that starkly highlight every enemy, and an XP system that directly translates to new guns in-game and online. The system is interesting and gave us something to watch out for during missions, which is another way of saying that the mission design was so dull that we didn’t care about much else.

The actual mechanics are very dull and monotonous. Enemies just come at you single-file and settle behind their designated blocks of cover 10 times out of 10 and all you have to do is find a nice camping spot, take out your magic binoculars, spot them, order your team to take them out while you go twiddle your thumbs somewhere or join in the fray yourself. It’s not as much fun as we hoped and it feels more like a chore that you have to get through to unlock the next awesome cut-scene rather than the reason you’re playing the game.

There are a few tense moments on and off and they’re well worth it, but they finish too fast and it’s back to the regular grind again. The grind is also not helped by the fact that your guns are so depressingly ineffective. As much of a spectacle as this game is, it also does an incredible job of showcasing the ineffectiveness of weapons of war. It takes you almost 2-3 seconds to kill a soldier (barring a headshot), two stingers to take down a chopper, you have gunships that are incapable of taking down a car and missile frigates that need to come within 500m of a warship to sink it. It just doesn’t make sense and the meatiness of the sound effect is vastly downplayed by the uselessness of the guns. A system like this makes sense in multiplayer, but in a single-player campaign, it just doesn’t work very well. We found ourselves sticking to the tried and tested LMG-Sniper combo just out of sheer convenience. 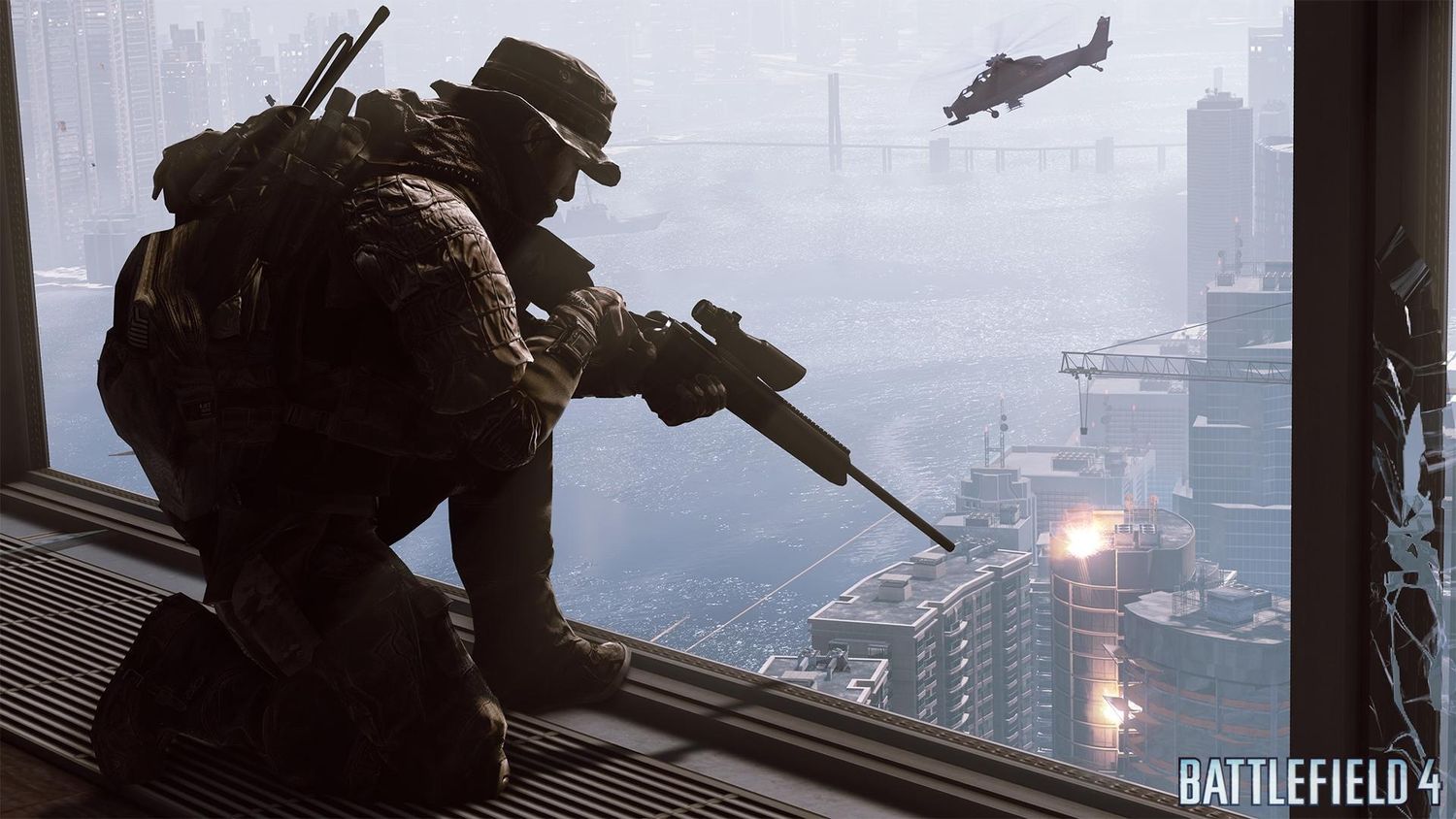 Speaking of loadouts, there are various supply caches all over the map and you can switch loadouts on the fly. It’s a nice touch that lets you stick to the combo you like, unfortunately, we do have complaints about the options available to you. There’s a marked lack of real individuality in the weapons of the same class, and the fact that stealth is just not an option because you’ve got no silenced weapons to rely on.

The problem with this game’s story is something that’s wrong with the story in most games. It takes itself way too seriously and wants you to take it just that seriously. Military propaganda, oft-repeated clichés and super-sensitive, stereotypical characters don’t make for a great story and it’s high time someone realised that and did something about it. We’re not interested in a career in the US military thank you very much; we just want a good game that’s a blast to play and a fun storyline is a bonus. To put it another way, we don’t really care about why the princess is in another castle, we’re just having too much fun. If there’s a good reason that she’s in another castle, we enjoy the game even more. The point of a game is the gameplay, not the story and if the story really is that important, it better be a good one.

Fortunately, multiplayer is where Battlefield has always shone and Battlefield 4 is no disappointment. Now when it really comes down to it, the actual gameplay is no different from that in Battlefield 3. Experienced players with snipers and aircraft still harass the life out of you and the battlefields are just as awesome and frenetic when you have the right company.

There are subtle differences between Battlefield 3 and 4 that might warrant the upgrade for some, we’re not really sure if they’re worth the upgrade (for the asking price, especially considering the myriad DLCs that you know are going to pop up soon), but the changes are interesting and do add some never unwelcome chaos to an already chaotic battlefield. The maps are more interactive for one thing, you can blow up more stuff and create more havoc for sure, but you can also raise and drop bollards to stop vehicles, lock gates to hamper troop movement and travel up and down elevators in buildings. It might seem like something minor, but when used well, can change the state of the game. 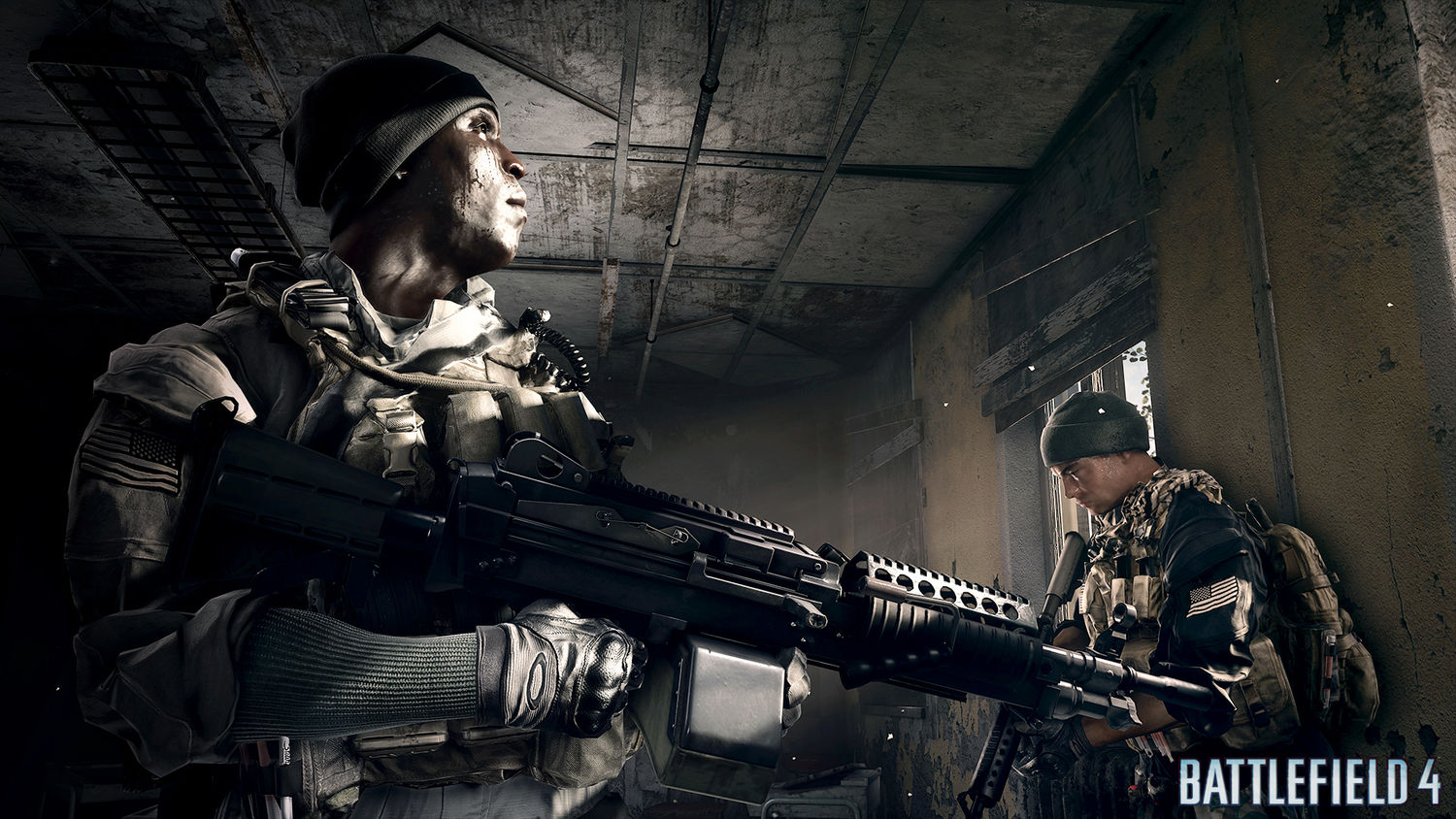 The larger changes have to be with regards to the “levolution” feature that EA is so happy to tell us about. It’s basically one major event that completely alters the way you play a particular map. Maybe it’s the blowing up of a dam that floods an entire map, or the destruction of a building that unleashes an impenetrable dust cloud for a while and reshapes certain portions of the map, or even weather effects that obscure your vision. It’s nice, not always helpful, and fun. It’s not as game-changing as EA would have us believe, but it’s one of those minor points that add up to the overall appeal of the game.

Commander mode is also a huge new addition to the game. Essentially, once you reach Level 10 (which shouldn’t take too long if you’re a veteran and know what you’re doing) you get to be the commander. You get a top-down view of the entire battlefield and you can sit and pester the life out of your squad-mates (trolling can be fun at times). You can promote squads on the battlefield, call in supply drops, UAV sweeps, vehicles and more. A commander is basically responsible for the overall battle since he has a better view, but the success of the mode depends almost entirely on whether you’re intelligent and the squads are willing to listen to you. When it works, it’s definitely fun. When it doesn’t, you can still have fun on your own. This mode forces you to work as a team and also to prioritize objectives as many of the secondary perks a commander receives are tied into the objectives. You can’t call in a cruise missile strike for example if a certain objective isn’t held. 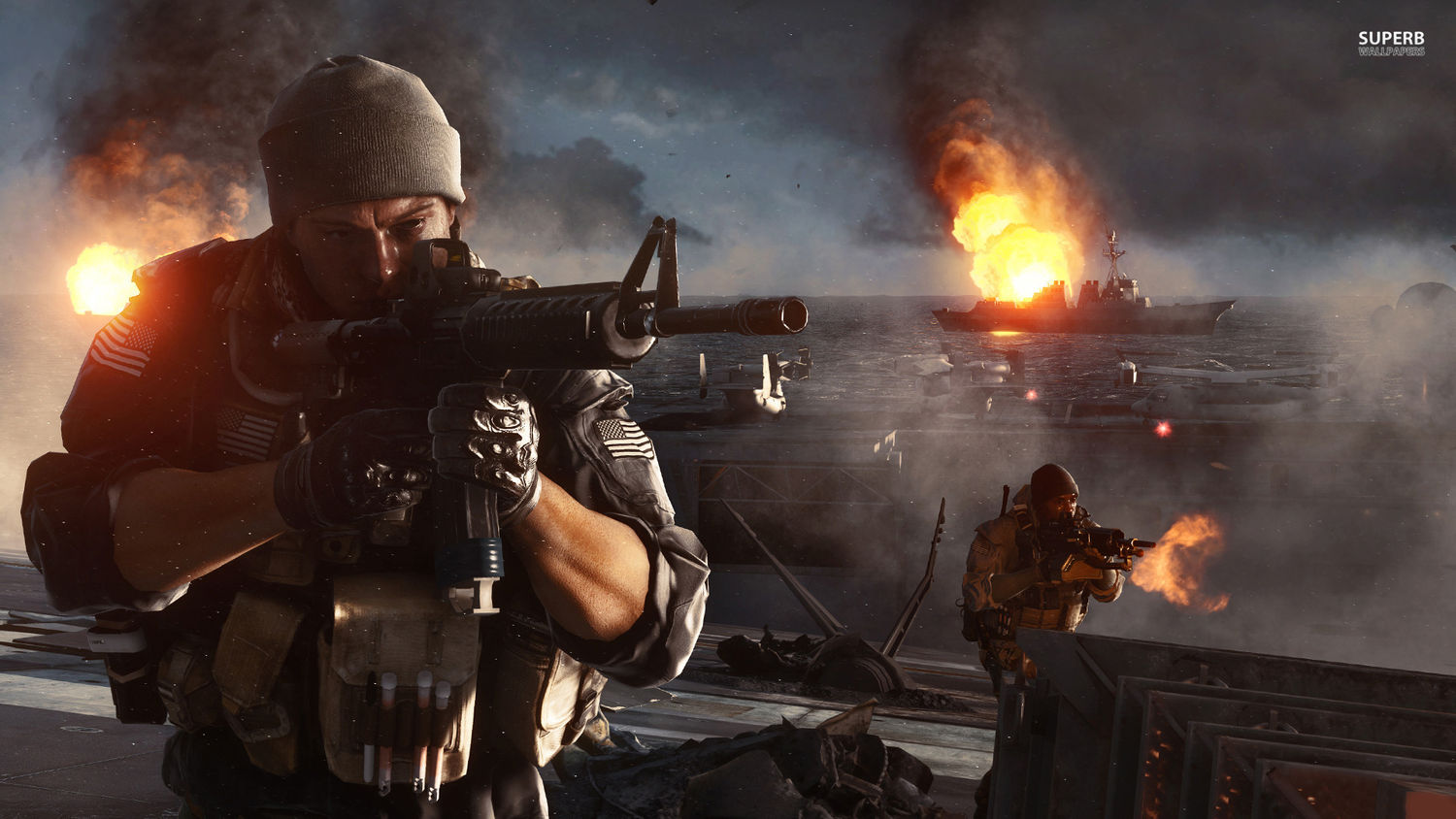 Of course, you have the usual, and expected, assortment of new vehicles, aircraft, boats and weapons and while you might be forgiven for thinking that learning the characteristics of each would take many hours of n00bish grinding to fully get the hang of, EA has thrown in a fully-featured training ground where you can get to grips with the assortment of weapon platforms at your disposal. This we found to be particularly useful for mastering flight because if nothing else, this reviewer in particular is one of the most useless pilots that Battlefield has ever seen.

Battlefield 4 is a great game in the same way that you might consider The Expendables or Rambo (IV) to be great movies. This game tries to be the greatest blockbuster that ever was and while it does fall considerably short of that lofty goal, it’s a blockbuster nonetheless and one that, despite its many flaws, you will want to experience.