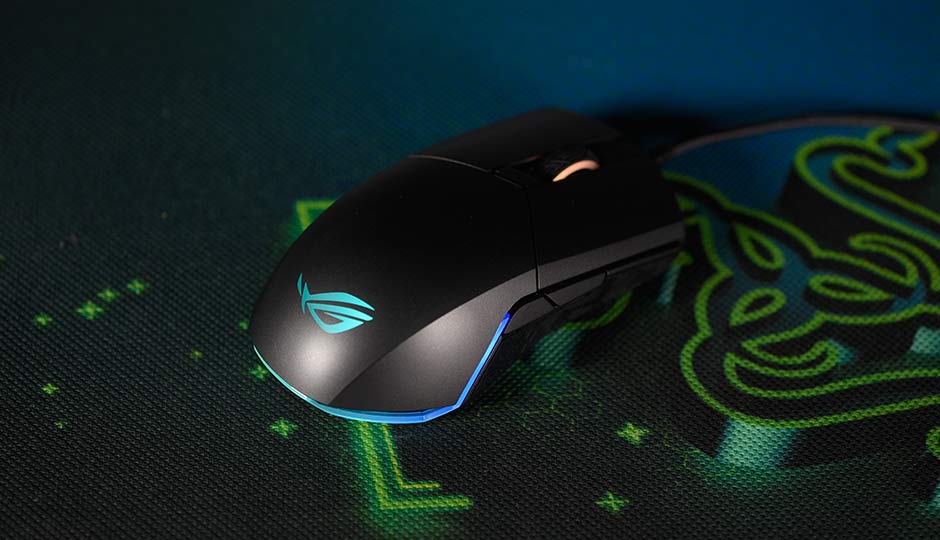 ASUS ROG Pugio Aura RGB Review: The kind of modularity that we love

The ASUS ROG Pugio's push-to-fit design for micro-switches is a wonderful feature for power users who would love to have the flexibility of picking between two different micro-switches. Both of them have their advantage and disadvantage, also giving owners the scope of having spare switches in case the default ones are damaged. In terms of build quality, the body is sturdy with no audible sensor rattle. We would have preferred a bigger surface area for the mouse feet, but that is subjective and the mouse was still able to maintain a smooth glide over cloth pads. There are three RGB lighting zones on the mouse with a beautiful LED strip on the bottom. The ROG Armoury software lets you control the lighting effects along with macros, acceleration, key functions, etc. These settings can be stored in three profiles on the mouse which can be toggled from the mouse itself. Although the features, build quality, and design score well in our tables, the mouse fails to offer great sensor performance. We observed several anomalies during our benchmarks and they have been discussed in more detail in the performance section. Based on these tests, we wouldn't recommend the ROG Pugio for competitive gamers. Since the mouse sensor doesn't display any acceleration or spinning out, casual gamers who don't need sensor accuracy and only want a beautiful RGB mouse can definitely go for it.

The push for RGB lighting in gaming peripherals is slowly becoming mainstream and as a result, the prices are going down. Earlier, it was difficult to come across gaming mice with support for RGB lighting in the low to mid-range budget segment. Meanwhile, modularity still remains a luxury. Modularity in gaming mice exists in many forms such as adjustable body dimensions, removable buttons, replaceable body, etc. ASUS is offering replaceable micro-switches on their ROG Pugio gaming mouse, giving users the option to swap them out for a different feel or resistance while clicking the right and left clicks. This isn’t a new trend since ASUS had already packed extra switches in their older ROG Gladius gaming mouse following the same swappable design. Apart from the additional switches in the box, there are other interesting aspects about the mouse that we will talk about in this review. 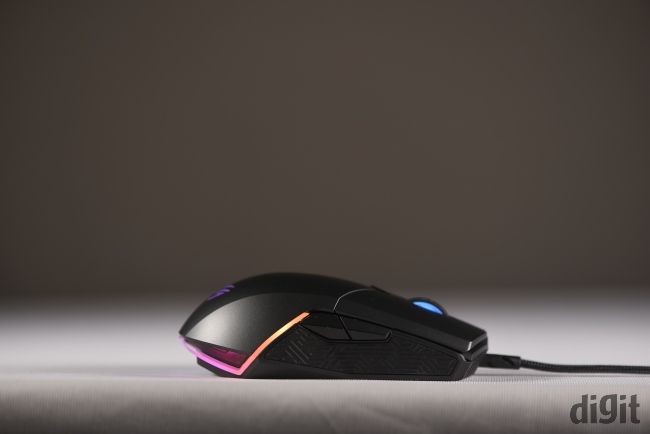 The ROG Pugio has an ambidextrous design, with forward and backward buttons on both the sides. Since the mouse has a slope towards the bottom of the body, it’s suited for palm and claw grip users. The default right and left click switches don’t have much resistance so it’s easier to click them. Both the sides of the Pugio have a textured rubber coating that gives it a better grip. It also becomes easier to pick up the mouse, assisted with the slight curve starting from the bottom to the top. RGB lighting looks great on the mouse, because of the beautiful LED strip at the bottom. All the lighting effects can be controlled by ROG Armoury software. 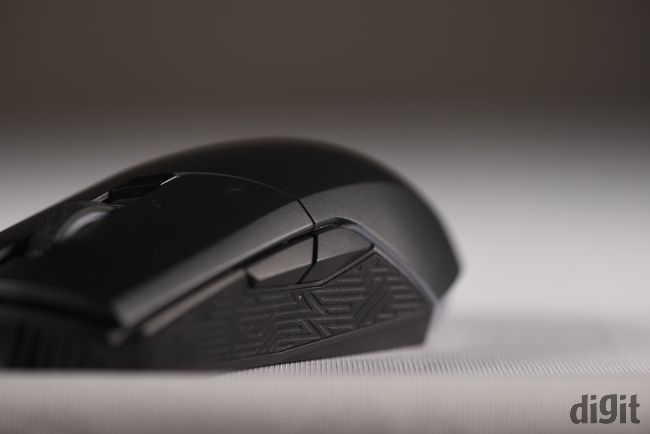 The decision to include extra switches with the mouse is a great decision to provide some amount of flexibility to buyers. If you’re well experienced with the tiny nuances in the feel of the switches and buttons in mice, you will eventually drift to one particular type. Either you will prefer a lighter feedback for faster clicks or go for a heavier and prominent feel. The default Omron D2FC-F-K switches on the Pugio have a lighter actuation force of 75 gf. If you’re used to jitter clicking or button mashing a lot, then they will serve you well. They are labelled properly and denoted with a blue switch. Additionally, you get two extra Omron D2F-01 switches which have a heavier actuation force of 150 gf, denoted by grey switches. Imagine the same as having the option to swap the switches on your keyboard. Another advantage here is you have an extra pair of switches to swap out in case the current one stops working. Swapping the micro-switches doesn’t require much expertise. 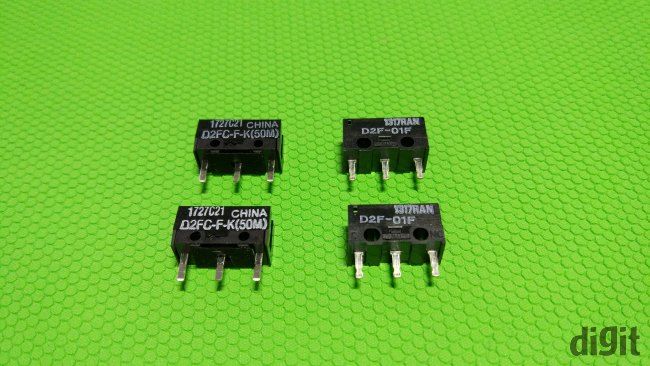 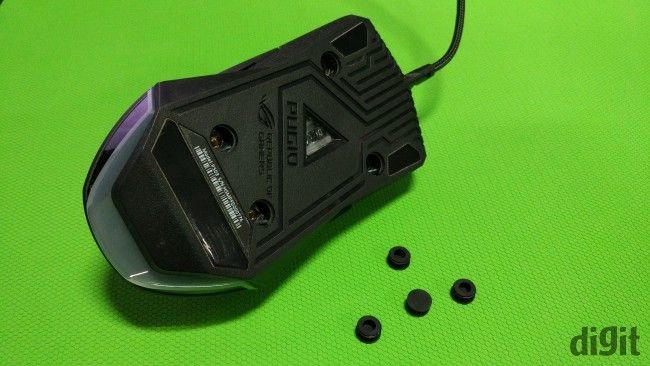 RGB lighting is another highlight in this mouse and the LED strip at the bottom looks beautiful. Apart from the strip, there are two more lighting zones including the scroll wheel and ROG logo on the palm area. Several lighting effects are present in the mouse and they can be changed using the ROG Armoury software. Up to three lighting profiles can be stored on the mouse and toggled on the fly. Speaking of accessories, you get the extra switches and blank covers for the side buttons. Since the mouse is ambidextrous, you can block the buttons on either side by replacing them with the covers. Say you’re a right-handed gamer, you can replace the two side buttons on the right with the appropriate blank cover. The switches and blank covers are stuffed inside a small box. Additionally, you also get a mesh pouch to carry the mouse along, and an ROG sticker. 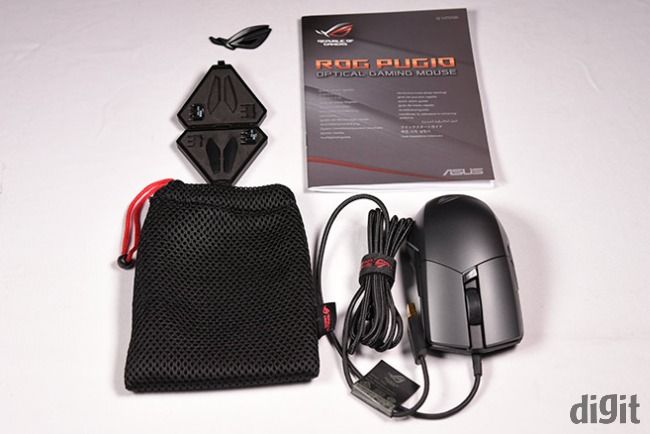 The Pugio is sturdily built both on the inside and outside. The sensor doesn’t rattle at all, nor does the scroll wheel since it’s mounted right on the main board instead of being suspended over it. On first look, the PTFE feet seemed like they wouldn’t allow the mouse to glide easily but the surface area of the bottom feet ensures there is a balance in friction between the mouse and surface. Generally, opening a mouse requires you to unscrew the screws after removing the PTFE feet. But this damages the adhesive underneath the feet over time requiring a replacement. The manufacturers and designers of the Pugio ensured that you don’t need to mess with the feet to open the mouse. There are four screws on the bottom covered with rubber grommets, making it easier to remove. Do note, there’s a wire plugged to the main board from the top CPI switch and you need to be careful when you’re opening up the mouse. There aren’t any additional clips to be removed and you can simply pull out the left and right micro-switches and push in the other pair. It’s that simple. 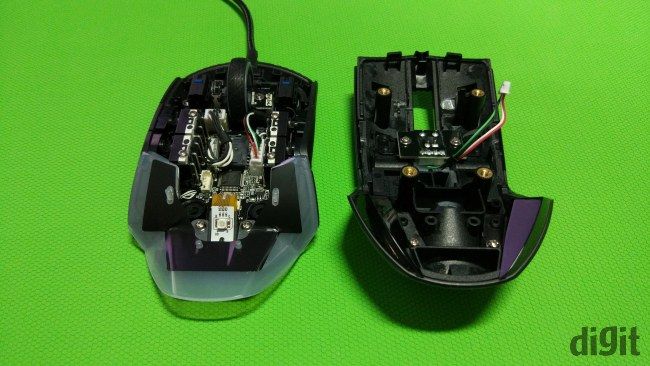 The push-to-fit design makes it easy to remove and install switches, rather than desoldering and soldering them using the traditional method. This is one feature we would love to see make their way in other manufacturers as well. The spare ones included are made in Japan which means they have better quality, rather than the default ones which are made in China (denoted by the “C” in D2FC-F-K). But the compromise here is the maximum click cycle or durability rating of Omron D2F-01 at only one million clicks whereas the default one has a durability of 50 million clicks. Although there’s a stark difference between the durability, they should last you more than a couple of years. Even after they fail, you have the option of buying micro-switches following the push-to-fit design to further push the life of your mouse. 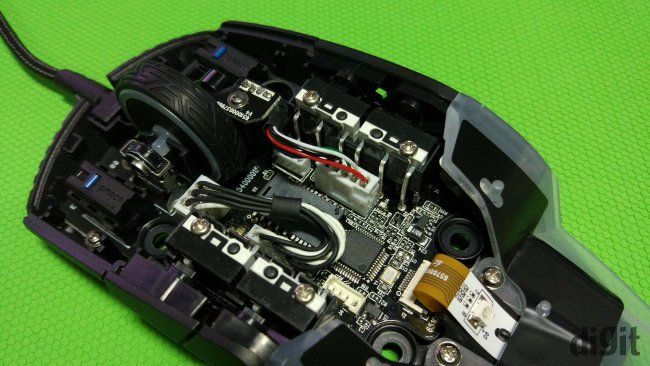 The performance of the sensor becomes questionable as we go to higher CPI levels. We didn’t notice any anomalous behaviour at around 800 CPI but it started acting up from 1,600 CPI. The PMW3330DM-TZQU sensor loses tracking accuracy after 1.5 m/s at higher CPI levels. At 3,200 CPI, we experienced the precision and smoothness to go for a toss. Fast swipes and continuous movements drastically affected the sensor’s tracking at higher CPI levels, generating graphs that we’ve never seen in our mouse testing. We are still trying to understand what caused this anomaly. There were also drops at regular intervals in the polling rate (set at 1,000 Hz) tracking that we observed and it was present in every CPI level. This could be because of the sensor struggling to keep up with the polling rate or the sensor might be going off in a low power mode at those intervals. We aren’t really sure about the reason and it could be an entirely different one as well. 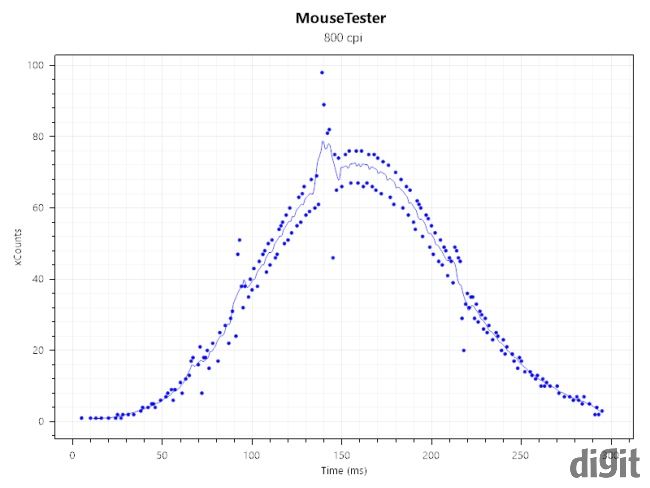 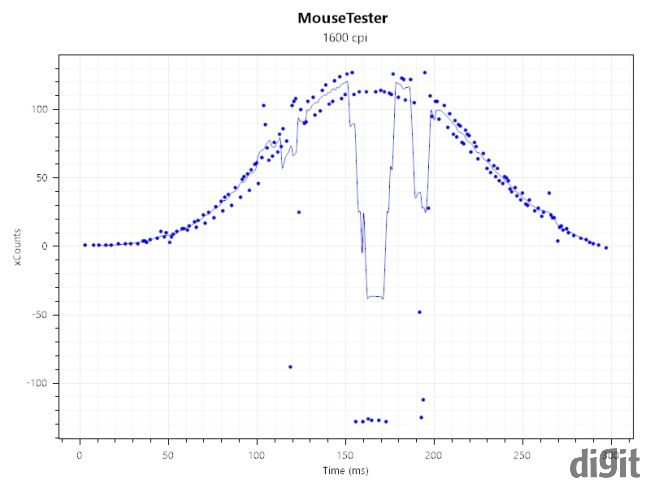 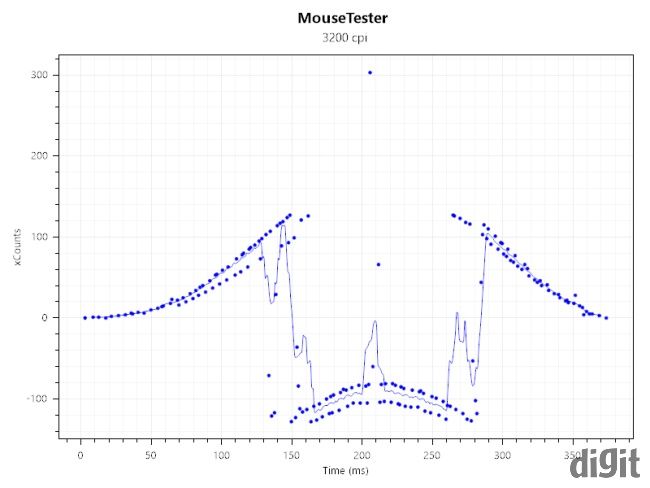 We didn’t experience any positive or negative acceleration on the mouse, nor does the sensor spin out on quick swipes. Playing at around 800-1,600 CPI or anything lower works fine and you won’t have any issues. Do note, fast swiping at 1,600 CPI also displayed loss of tracking. Sensor tracking at higher CPI levels does become jittery and although it’s not unplayable, we wouldn’t recommend this mouse for competitive FPS gamers. For casual gaming, we didn’t face any problems while aiming in the specified CPI region. 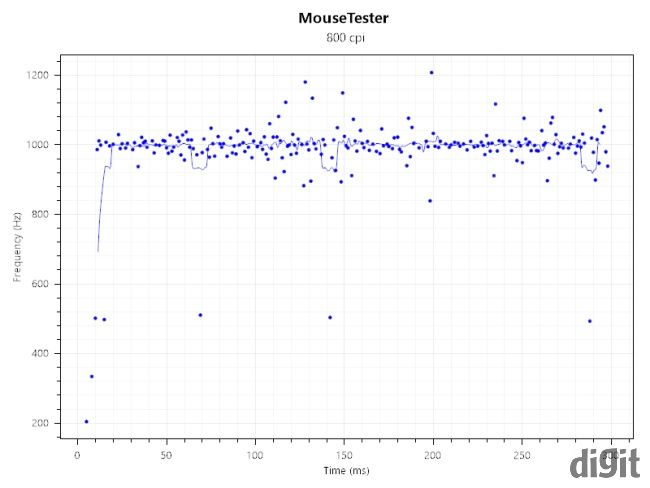 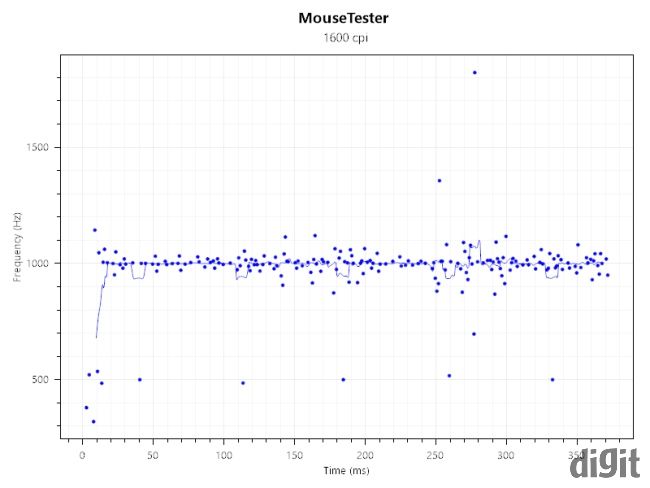 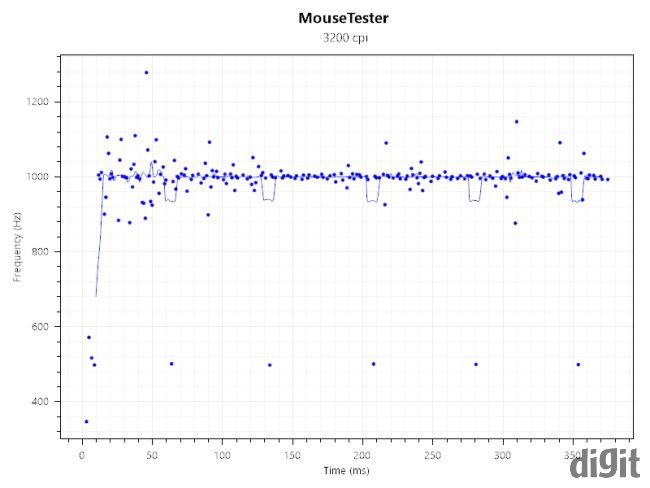 The ROG Pugio goes beyond offering just modular side buttons by providing swappable micro-switches for the left and right clicks. The push-to-fit design allows you to swap the switches easily. Essentially, you have the option to switch between a heavier or lighter feel. They also act as spare switches in case the existing ones stop working. The mouse comes with covers for the side buttons, in case you want to use only one side. The Pugio has a beautiful RGB strip at the bottom. There are two CPI levels that can be changed from the Armoury software. The mouse supports three profiles that can be toggled with button combinations from the mouse. All the changes you make on the software will be stored on the mouse. The tracking accuracy at higher CPI levels is anomalous but it won’t affect your gameplay at CPI levels between 800-1200. Features such as extra micro switches, wonderful RGB lighting, and onboard storage of profiles, combine to make the ROG Pugio a great choice for casual gamers.