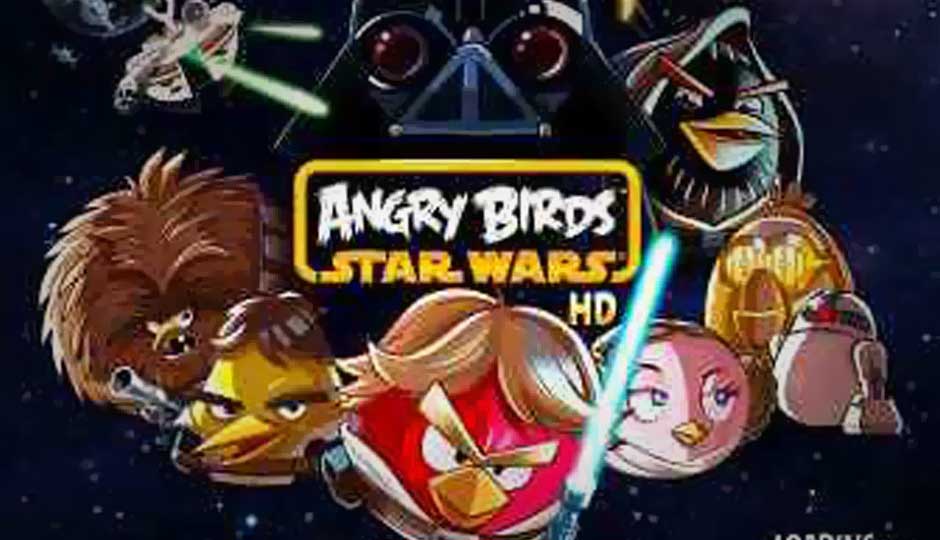 We've not enjoyed an Angry Birds game this much since the original. Angry Birds Space was supposed to be the "Big Hit" for Rovio, but frankly, it didn't impress us as much as we had hoped for. Angry Birds Star Wars on the other hand wouldn't let us put the iPad down till weï¿½ve gone through all the 80 levels the app ships with. There's another episode on the way, based on Hoth from Empire Strikes Back which will be free. The bonus level where we get to play as C3PO and R2D2 are also very engaging.

Finland, it seems, is developing a reputation for unleashing talent upon the world. This talent takes the world by storm, dominates for a while and then starts to lose its hold on the peoples’ hearts. No, we’re not talking of Nokia, but of Rovio.

Rovio gained global fame almost overnight (well, not exactly) with their Angry Birds game, where the objective of the game was to flick birds across the screen using a slingshot to destroy the piggies’ stronghold. Apparently the birds are angry because the pigs have stolen their eggs, but we wonder if they’re actually angry because they’re constantly getting tossed around the screen by millions of people around the world.

As time goes on though, the game didn’t evolve much, except for changing the scenery of where you were tossing the birds. They went from obscure locales to Rio and then finally onto Space, the final frontier. Sadly, as they made this journey, people started to lose interest, with sales of every subsequent game dipping noticeably. However, when Rovio announced Angry Birds Star Wars, there was a sort of an electrifying buzz going around the air. 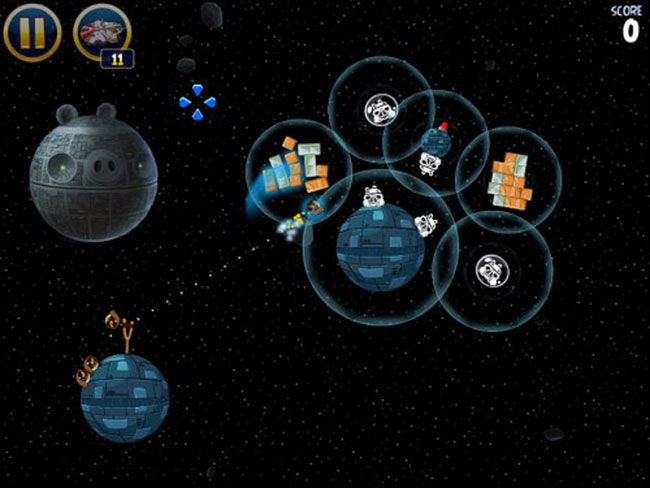 We’ve spent a considerable about of time with the game, playing it over and over and we’d love to share with you our thoughts on it.

Right off the bat, the game has the familiar elements of the way the birds are shaped, the same 2D cartoon-ish look. However, the Star Wars franchise too is strong in its presence. All birds are designed to very closely resemble characters from the Star Wars franchise, like the Red Bird, who now looks a LOT like Luke Skywalker. In the previous games, the Red Bird did nothing but made battle cries, however, in Angry Birds Star Wars, it wields a lightsaber to slice through any obstacle that might stand in its path. Lightsabers are bad ass, and angry birds with Lightsabers are just down right awesome. The birds in this new game have received a significant overhaul, with each of them now resembling one of the many main characters from the Star Wars franchise. We’ve got Obi-Wan Kenobi, R2D2 and C3PO (as part of the special bonus levels), the Rebel Pilot and even Chewie! 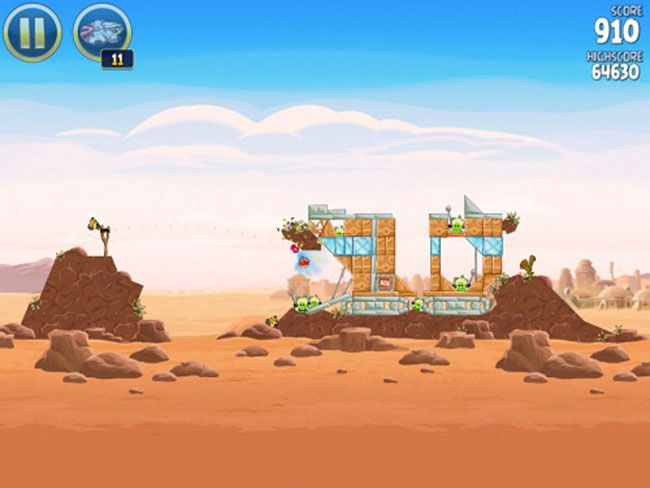 Each bird is not only fashioned around these characters in looks, but also in terms of their abilities. The Obi-Wan bird can knock sizeable objects, or anything for the matter, by simply using the “Force.” The Rebel Pilot bird is essentially the same as the tiny blue bird that would split into three even more useless birds, but this time, they actually dish out damage. 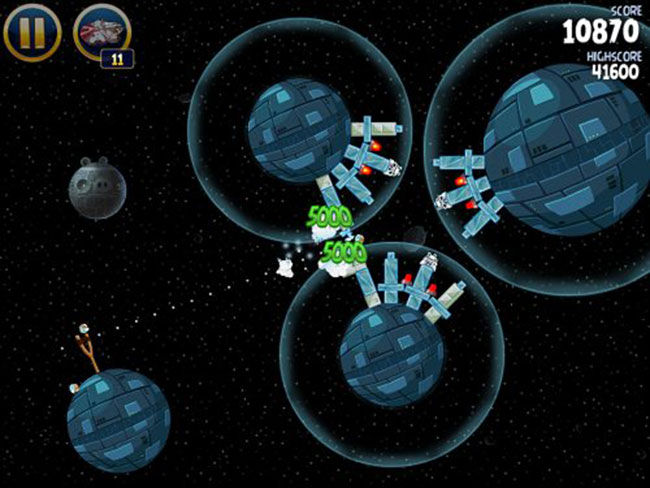 On the surface, it doesn’t look like the gameplay has changed much, since you’re still tossing birds to destroy them piggies. However, now instead of looking like birds and pigs, they resemble Star Wars characters. The fact that World 1 is set in Tatooine and World 2 in Space (with the DeathStar looming in the background, clear as day). However, while the core concept remains the same, the execution has changed. We are now playing a hybrid storyline, once that blends signature Angry Birds goals with the classic Star Wars elements. The Pigs are now Stormtroopers, wielding laser blasters in some situations. There is even some direct referencing to some of the movies, like a particular Trash Compactor puzzle, a scene from The New Hope. 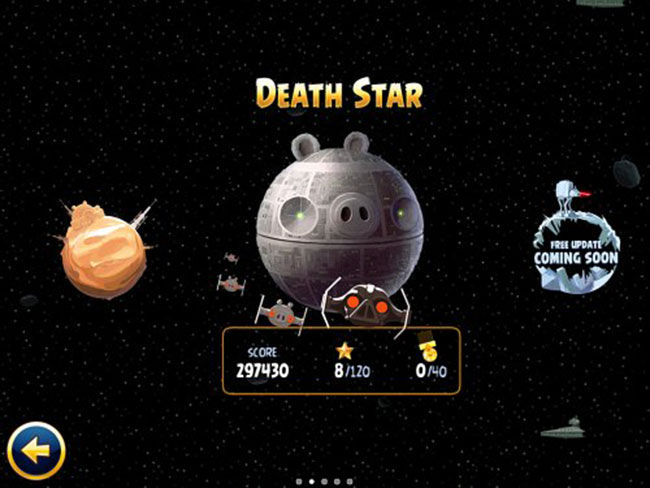 We played the game on an iPad2 and didn’t find any hitches whatsoever. Scrolling, zooming and all other gestures associated with the game were absolutely fluid. It’s great how Rovio has managed to keep the performance of the game at such good levels even on old hardware. Another thing we really liked was that The Mighty Eagle, which was an in-app purchase how now been replaced with a laser shooting Millennium Falcon, and you won’t have to pay for it. The Millennium Falcon can be had by achieving a certain number of stars and at every tier, you receive a number of Falcons you can use. This is exceptionally great if you’re getting frustrated with a particular level and just want to get ahead without having to pay.

The bottom line is, we’ve not enjoyed an Angry Birds game this much since the original. Angry Birds Space was supposed to be the “BIG HIT” for Rovio, but frankly, it didn’t impress us as much as we had hoped for. Angry Birds Star Wars on the other hand wouldn’t let us put the iPad down till we’ve gone through all the 80 levels the app ships with. There’s another episode on the way, based on Hoth from Empire Strikes Back which will be free. The bonus level where we get to play as C3PO and R2D2 are also very engaging.

It is very evident that Rovio has paid a lot of careful attention to making sure that the merging of the two popular franchises is just right. As fans of Star Wars and Angry Birds, we don’t feel that a crime has been committed, or that Rovio hasn’t given a particular character their due. If you’ve got an Android device, an iOS device, MAC or Windows Phone 8, you can get the game from the following links: