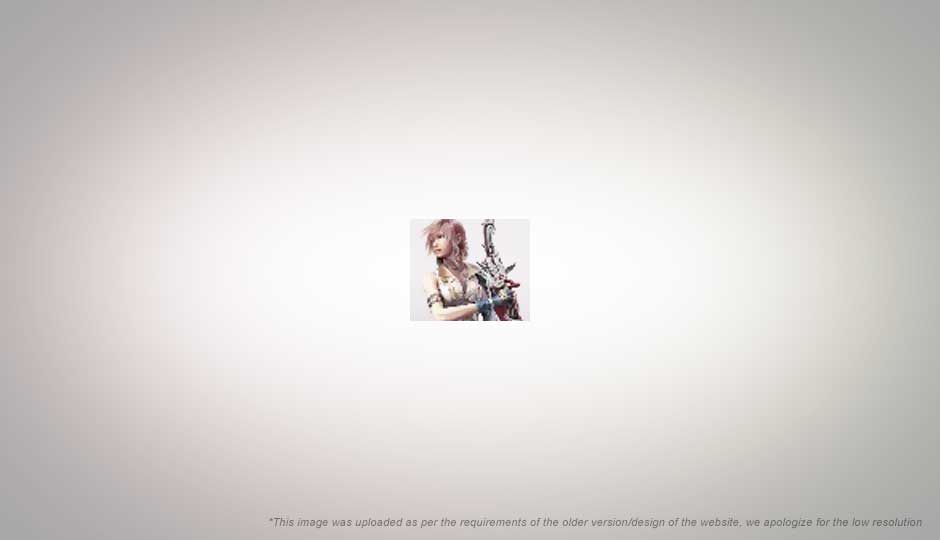 Square Enix has embarked on the Fabula Nova Crystalis journey with the release of Final Fantasy XIII as the flagship game in the series. While Square Enix has retained some of the series trademark traits that make the game instantly recognizable, there are also some significant shifts with its core-game-play. A traditionalist may find it hard to readily accept some of the changes in the system that has transformed it from being typical turn-based to something that is perched precariously between real-time and turn-based. Besides the combat system — and other elements that are closely related to it — Final Fantasy XIII retains the series' unique style of storytelling and character development.

As this game is part of the Fabula Nova Crystalis series of games, the central theme revolves around the uncontrollable and over-bearing power of ‘Crystals’ to influence life and politics. Final Fantasy XIII tells the story of two worlds — a land called the Pulse and a tiny planet called Cocoon that hovers over Pulse. The leaders of the two worlds have ensured that their people are extremely fearful and hateful of each other and the real story behind the struggle is revealed through the exploits of the a group of people from both worlds. One cannot help but notice the striking similarities between the game’s story and real-life events following the discovery of Black Gold that affects the world even today. 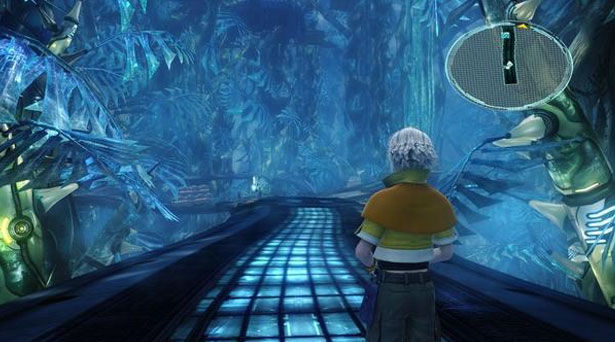 The game’s protagonist is an ex-member of the local army who goes by the name of Lighting. As the game progresses and events transpire, she joins up with a group of five other characters that share tenuous similarities in the past and are now faced with a common ordeal. A few hours into the game, this group gets marked by the powerful Fal’cie to become the instruments of Cocoon’s destruction. This task pushes the limit of the party’s skills as well as their mental resolve as most of them call Cocoon their home. The game can have a similar effect on the player, and the main plot itself can run into little over 60 hours of game-play. This is mainly because the game’s story develops at a very slow and steady pace, and this is achieved through Square’s trademark in-game cut-scenes and brilliant pre-rendered videos. 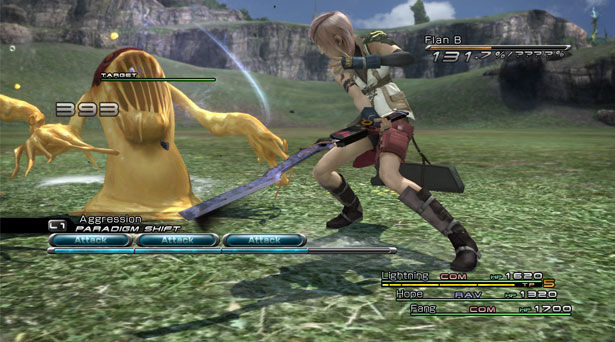 Getting marked by the Fal’cie unleashes new and powerful abilities within each of the six party members. One such ability allows a character to specialize in three of the six available classes. These classes will be all too familiar to patrons of role-playing games. Referred to by different names, these roles are that of a melee specialist, a tank, healer and offensive, defensive and de-buffing spell-casters. A maximum of three party members can enter a battle and the player can directly control only one character. As for the other two party members, the player can only control the characters current role (healer, tank, spell-caster, etc) and this referred to as a Paradigm shift.

The player can time the attacks of all the party members to unleash a volley of chain attacks on the enemies for increased damage. When a single enemy is relentlessly attacked, its chain meter begins to fill up. Once this meter is completely filled up the enemy gets ‘staggered’ and this causes each subsequent attack to be substantially more damaging. These Paradigms are central to this game’s combat system and it surprisingly opens up many tactical and strategic options that retain its lustre till the very end. 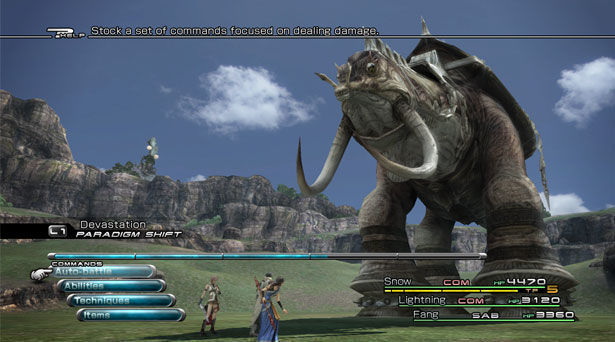 Yes, this one is as bad-ass as it looks

At the end of a battle the player is rewarded with Cyrstogen Points (CP) along with other possible rewards like items, weapons and potions. CP is used to unlock skills and abilities from a multi-tiered skill-tree specific to each class. Some of these abilities unlock new moves for a character while others improve the character’s stats like hit-points. As mentioned earlier, each character starts-off with three classes that are predetermined by the game. Deep into the storyline, the game unlocks the ability for party members to grow in any of the six classes. Considering the CP cost at higher level, the player will likely have to trade between sticking to original classes or diversify a character into new domains.

During specific point in the game’s storyline, each character gains the ability to summon a personal guardian called Eidolons. Each party member will get a unique Eidolon and only the party leader can summon them at a cost of precious Technique Points. These Technique Points are precious since the only consistent way of earning these is by getting a high rating at the end of each battle. Each of these Eidolons also has something called as a Gestalt Mode that essentially allows the player to ride their summoned guardian and unleash special moves. The summon durations are fairly short, so this ability is mostly used as a trump card in a particularly tough battle. 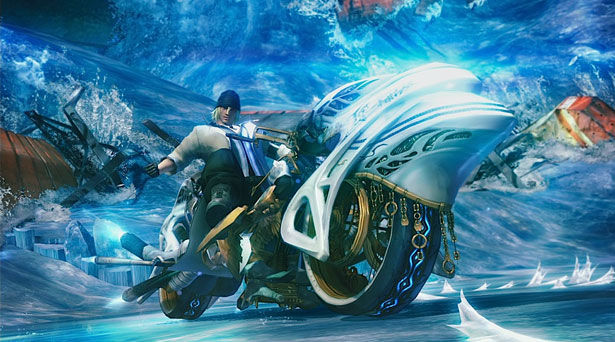 One of the hallmarks of a good game is the ability to consistently reward the player with something new and Final Fantasy XIII manages to pull this off quite admirably. The first half of the game has the party members scattered in different groups and this time is used to establish the characters in the story. Predetermined party configuration and variety of enemy types keeps things constantly interesting. Then towards the climax of the storyline, the game unlocks a total of 64 side-missions that can be completed before or after beating the game. The game features upgradable weapons and items that can take considerable time and effort and unfortunately, it can be described as daunting at best. This is one feature that sticks out like a sore in what is otherwise a pretty enjoyable experience.

After finishing the main plot, the game unlocks another tier in each of class skill-trees. This is mainly useful to prepare your party for some of the hidden and epic enemy encounters whose hit-points can run into a few millions. Completing some of the side-missions rewards the player with the ability to use a Chocobo as a mount. This further opens up access to new areas and subsequently, new encounters and treasures. All these options easily add another 10 to 20 hours of game-play, taking the total close to 80 hours. This should be exciting for hardcore fans of the genre that do not shy away from long hours and actually revel in it. 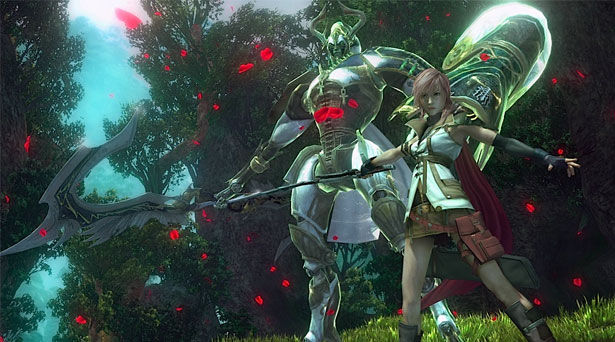 Lighting with her guardian, the Eidolon Odin

As I had mentioned earlier, the Paradigm system is central to the game’s combat system, and you are going to engage in a lot of fighting in this game. This is because the party is constantly on the run and the game has nothing resembling a town or a hub. After you are half-way through the game, the enemy’s hit-points starts getting into range of a million. The key to winning such battles is to understand the enemy’s weaknesses and accordingly selecting the party configuration. Selecting the appropriate Paradigms and shifting between them to adapt to a situation is equally important. This is not a very complex system, but if you fail to properly understand and use it, some battles will be very long and frustrating.

The game’s visuals are shiny and the game runs brilliantly on the PlayStation 3, which is a big plus in itself. The load-times are quite low and I did not notice frame-drops or any other common graphical artifacts. Beside the upgrade system—which I found cumbersome—there is little else that is glaringly wrong with the game. Maybe I should mention that this is an outsider’s view as I am admittedly not a big-fan of JRPG. I remember Grandia II as the only other Japanese RPG that I enjoyed and played several times over. If you are looking for a game with a lot of game-play, Final Fantasy XIII is the deal of the season. Compared to the long hours, the game manages to keep things fresh right till the end and beyond.