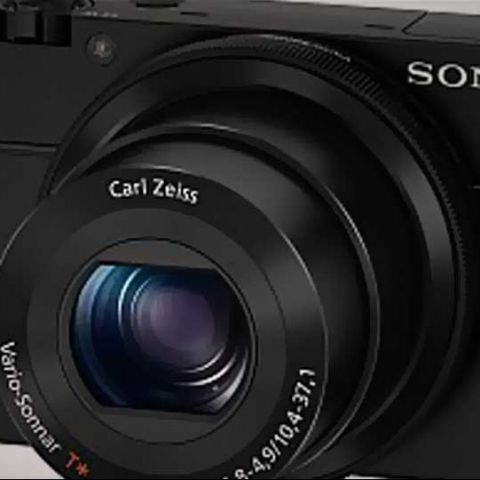 The Sony DSC-RX100 is by no means a DSLR replacement, but it is definitely a strong companion for those who are used to DSLR-like quality and features. There's a lot to love about the RX100 like the compact form factor, the control ring on the lens, the fast aperture and the larger than usual sensor. While the camera does offer a large f/1.8 aperture, the maximum aperture changes rather quickly to higher numbers the further one zooms, going all the way to f/4.9.

Sony’s been on a roll, releasing products that are clearly making news everywhere. With first helping develop the back-side illuminated sensors for point and shoot cameras and then improving upon the semi-translucent mirror technology for faster burst rates, Sony has not been shy to make its presence felt.

We have yet another head-turner of a product, the Sony DSC-RX100. The camera made big news a couple of months ago when it was announced. It wasn’t just the compact form factor, or the Zeiss glass. There was also the really fast aperture of f/1.8 on the wide-end coupled up with a 1-inch sensor that made this camera stand out. We’ve seen Nikon flaunt a similarly sized sensor in its mirrorless camera, but for Sony to pack it into a compact camera is definitely a big deal.

Build and Ergonomics:
The RX100 is ridiculously compact. We had absolutely no problems letting it slip into our pockets, be it in denims or cargo pants. The body has some heft, probably due to its rock solid construction. The camera is a flat piece of rectangle with a screen on the back with a few buttons to its right.

The layout of the buttons is very clean, something Sony has pretty much perfected. A mode dial sitting next to the shutter button atop the camera is a nice touch, especially for those who generally prefer to shoot in Manual or other modes. The back has the usual multi-purpose jog dial, a playback and delete button, a button to access the menus and an “fn” button. The “fn” button also acts as a quick access button for various settings such as ISO and picture settings.

A unique build feature of the RX100 is its pop-up flash. It’s built into the top left corner of the camera, but instead of mounting the flash tube on a plastic rod that sticks out in low light, Sony has placed the light bearer on a spring action arm. There are a few good things about this and for starters, it just looks damn good. Second, and probably something many photographers would love, is that you can pull the flash head back (thanks to the spring joint) and use it to bounce light instead of just a straight on flash.

Features:
All the things that make the RX100 so exciting! There’s the bright f/1.8 lens (the fastest aperture so far in a point and shoot) with a focal length of 28-100mm. The wide f/1.8 aperture at 28mm is good news for low-light shooting, coupled with the large sensor. But, sadly, the aperture quickly drops to f/4.9 when approaching the telephoto end. Regardless, the lens on the RX100 is of Carl Zeiss T* branding. For the uninitiated, Carl Zeiss has the reputation of being one of the finest lens makers in the world and T* is one of their coating technologies that significantly reduces ghosting and flaring. We never had an issue with either of those in our use of the RX100, so the coating does come into play.

The sensor is the second big deal about the RX100 – there are 20 million pixels packed into a slab of silicon, with dimensions of 13.2mm x 8.8mm. That’s an inch across if you’re wondering. According to Sony, the sensor has seen quite a few improvements, the most noticeable being that the pixel pitch on the new sensor is 3.6 times the size on a regular point and shoot sensor. Thanks to bigger individual pixel sites, the RX100 claims much improved low light performance as compared to other Sony cameras.

The third interesting feature, which places the RX100 into the advanced point and shoot segment, is the control ring which has been built onto the lens. The ring is unobtrusive and extremely smooth. It can be assigned to either control specific settings (like ISO) or be set to correspond to the settings when in a particular mode. For example, when we shot in aperture priority mode, the ring changed the aperture settings. The control ring can also be used to manually focus, lending the RX100 a somewhat DSLR-like feel. However, with a lack of any distance scales, manually focusing on the RX100 can be a little cumbersome, even with the auto magnification assist feature enabled.

Image Quality:
Sony’s no stranger to great images, seeing as how they have made sensors for some of Nikon’s DSLRs. Sony has been the great push behind what can be expected from compact cameras, and the performance of the RX100 is quite impressive. It’s quick to power up and start shooting. The specs claim the camera can shoot up to 10 frames per second and we had no problems hitting the 8-9 frames per second mark. Thanks to a Sandisk 32GB Extreme Pro XDSC card, we seemed to not hit the buffer limit on the RX100, despite shooting at full resolution RAW (each file being around 30MB).

While using the RX100 camera outdoors, we had no problems using it like a typical point and shoot. It’s a pretty nifty camera, capable of producing good results regardless of your skill level. While shooting in overcast conditions, the camera produced pleasing images with a strong and crisp contrast with a tendency to saturate the greens a little bit. Not so bad if you’re a nature shooter and nothing to be really considered about if you’re shooting RAW. When we shot under clear skies, we noticed that the camera has a tendency to expose for the shadows, which isn’t so bad. Clipping does occur in the highlights under strong lighting, but that is to be expected from a compact camera with a small sensor.

Our studio tests of the RX100 were evident of all the claims of performance boost on the new sensor. Up to ISO 800, we didn’t notice any sort of degradation in image quality, which is definitely unexpected for a point and shoot, but not so surprising for a larger sensor. When we started hitting the ISO 1600 and 3200 mark, the sensor still managed to maintain extremely low noise levels, however, the noise reduction algorithms started to become evident. Even at ISO 6400, noise was nothing more than fine grain, but details turned blotchy due to noise reduction.

The video performance of the RX100 is just as amazing as the image quality. The bigger sensor and pixel pitch really does lend itself well to the compact’s ability to capture and recreate the real world. The audio was pretty good (and not just for a point and shoot). The f/1.8 helps quite a bit when shooting in low light, but expecting it to work magic in tragic lighting conditions would just be asking too much.

Verdict:
There’s a lot to love about the RX100 like the compact form factor, the control ring on the lens, the fast aperture and the larger than usual sensor. All, however, is not peachy in the land of the Japanese electronics giant.

While the camera does offer a large f/1.8 aperture, what isn’t mentioned is that the maximum aperture changes rather quickly to higher numbers the further one zooms, going all the way to f/4.9. In our opinion, that’s quite a dent in the USP of this camera. As far as imaging goes, we’re quite surprised that we have nothing to complain about here. Sony’s cameras have in the past been known to have a serious problem with JPEG artefact and loss in detail, but not the RX100. In fact, we noticed that the corners in the images out of the RX100 were rather sharp, even when compared to images out of our DSLRs.

A final gripe, and this really is nitpicking, we had with the RX100 is its rather flat design. The lack of a grip makes the camera a little difficult to shoot with over long periods of time. While you can buy a custom grip for the camera, something about holding the RX100 like a regular point and shoot just doesn’t feel right. But that is just a small hiccup. The thoughtful design of the flash alone was enough to make us not subtract too many points because of the lack of a curvaceous grip.

All in all, the RX100 is by no means a DSLR replacement, but it is definitely a strong companion for those who are used to DSLR-like quality and features.