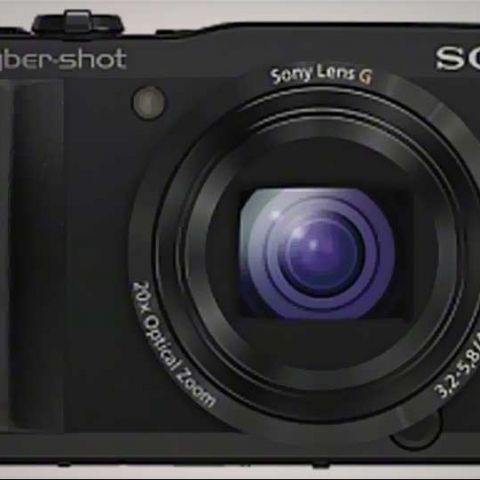 The Sony Cyber-shot HX20V is a significant upgrade to the current favorite, the HX9V. The HX20V comes packed with an 18MP BSI sensor, a 20x optical zoom and an onboard GPS chip. The upgraded sensor has also allowed Sony to expand the ISO capabilities of the HX20V to 12800, although we wouldnï¿½t really recommend using it at those numbers. Overall, the Sony HX20V adds to the glory of the HX9V, but also brings along with it a few quirks.

Sony’s ability to pack impressive specs into cameras is one of the reasons why they’ve been able to make such an impact in the camera market in India. It goes without saying that an equally impressive balance of pricing and performance matches the specs. The HX9V was a testament of that fact, and now, the upgraded HX20V is here and we see whether it lives up to our expectations:

Build and Ergonomics:
Out of the box, the Sony Cyber-shot HX20V feels hefty, with a sturdy build, weighing in at roughly 250 grams, including the battery and SD card. The camera is made up of polycarbonate plastic that is 99% recycled materials (a proprietary technique Sony developed), which makes it feel rather metallic. We had to actually ask a few people to knock on the body and tell us whether it was plastic or metal!

The model we received was black in color, and had matching buttons at the back. The finish was excellent, with the buttons blending seamlessly into the body. The right side of the camera has a rubber grip running along the back-to-front curve, to add to the comfort of holding the camera. In our opinion, it is an amazing addition as the rubber provides a better grip on the camera (no more accidental drops). At the back, there is a really nice (and generously sized) rubber indent where the thumb would sit. Right next to it is the button to start recording video, which can be engaged regardless of what position the mode dial is in. An extremely efficient feature to save those crucial seconds if you ask us!

The top of the camera features the standard shutter button surrounded by the zoom control along with a mode dial that is sufficiently resistant to accidental switching of moves, yet smooth enough for comfortable operation. The bottom side features the standard cover plate under which resides the battery and memory card slot. Next to the battery door is a tiny proprietary-charge/transfer images (and video) port. While this eliminates the need for a USB port, the system is designed so that the battery doesn’t have to be removed from the camera to charge it. Just plug your camera using the supplied cable into the USB port of your computer and the battery will start charging. Of course, there is an external charger as well, for times when you might not be around a computer, but the battery must remain inside the camera to charge.

Performance:
The Sony Cyber-shot HX20V features the proprietary Optical SteadyShot technology, so of course, that was the first thing we tested. We zoomed in all the way to the 20x mark and pointed the camera at a rather pleasing bush in a local park and shot at various ISOs. We managed to hand hold most of our shots just fine, except when in extreme low light conditions (there, slow shutter speed coupled up with moving subjects will produce a blurry image no matter what). Even during the movie mode, shooting at about 15x, the stabilization held its ground. Needless to say, the system works rather well.

At the heart of the Sony HX20V is a 18.2 megapixel Backside-Illuminated Sensor, that promises to deliver great images, both in low and harsh lighting. In our outdoor test, we found that the HX20V maintained corner sharpness rather well, while giving even better center sharpness. However, we did notice a significant amount of JPEG compression artefact, especially when zoomed in all the way to 20X. The images we shot looked fine during preview at normal zoom, but when blown up to a 100%, the artefact was quite prominent, so we wouldn’t recommend making poster size prints, but for web and small size prints, the images look absolutely fine.

One thing we noticed was that the HX20V had no problems locking focus in any situation. Obviously, we did not point it at the sun and command it to do the needful, but realistically, be it at the wide end, or the extreme telephoto end, the HX20V locked focus on the intended subject almost instantly. Even when we shot macro photos, the camera locked focus on the flower quite easily. The lens does a good job of keeping the distortion levels considerably low.

Inside the studio, we ran the Sony Cyber-shot HX20V through the ISO hoops and were quite pleasantly surprised to see the lack of noise all the way up to ISO 800, after which, the noise was still missing, but the aggressive noise-reduction algorithms were causing the image quality to take a hit. The edges were the first to start losing detail, with the center becoming visibly affected around ISO 3200. Despite the noise reduction the camera maintained the overall white balance and well and color rendition was quite accurate (slightly on the cooler side, however, at ISO 12800, the image acquired a strong warm tone, too reddish for our liking. We strongly recommend staying below ISO 3200, as you can probably make out from the image samples.

The Cyber-shot HX20V is capable of full HD video recording (1920x1080 at 60p) in AVCHD (MPEG4) format. The camera spits out the files in a not too popular .MTS format, but it can be played back on all common media players. The quality of the footage is pretty good, with the clips being recorded roughly at 15mbps. The camera is capable of optical zoom during filming (the SteadyShot works too) and the operation is absolutely silent and smooth. We were curious as to how the focus would hold up as we zoomed in and out of the scene, wondering if our subject would remain in focus or not. Surprisingly, the camera kept the focus locked for the most part, only hunting a little when we went from wide angle to telephoto.

Verdict:
For Rs. 22,990, you get the most feature-packed travel zoom on the market. The Sony Cyber-shot HX20V packs an impressive sensor, the longest zoom range in a travel zoom and an on-board gps chip for easy geotagging. The SteadyShot system works superbly to stabilize the lens at slow shutter speeds, which is well complimented by a stellar performance at relatively higher ISOs (acceptable up to 3200). However, the one drawback on this otherwise gem of a camera is the JPEG artefact that is visible at larger magnifications. Lens performance further degrades as you reach the telephoto end, but not enough to be visible in small prints or web view.

Another aspect we simply loved about the Sony HX20V is its menu system. It is designed as a transparent-single line overlay, that doesn’t cause the LCD to black out. Any change in settings is immediately reflected on the LCD (such as changing white balance or exposure compensation). The menu is also very intuitive, based on simple graphics which depict clearly what setting they correspond to. Even though we were looking at it for the first time, it took us all of 4 minutes to get absolutely familiar and comfortable with the Sony HX20V’s menu system.

Overall, the HX20V is a great camera, juicing out every last bit of performance from a tiny 1/2.3” backlit sensor.