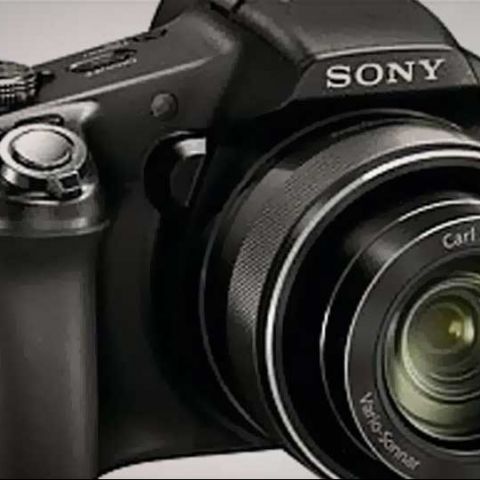 A high quality ultra-zoom from Sony. This camera almost ran away with the our scores this time around, with only the Canon Powershot S100 giving it a run for its money. The camera sports impressive video recording capabilities and managed to ace almost all of our tests. A brilliant all-round camera if you can don't mind the size.

The Sony DSC HX100V from Sony is a feature-rich ultra-zoom camera, offering 30x optical zoom along with an EVF, an articulated screen and even Sony’s specialised EXMOR-R sensor which claims to provide exceptional performance in low-light situations.

On the optics front, the camera offers 30x optical zoom. The camera features a large and comfortable zoom ring on the lens, but it is interesting to note that the zoom ring electronically controls the movement of the lens. This has the advantage of giving you manual control to a large extent, but also ensures that the zooming is smooth and jitter free. Also, as very little effort is required to rotate the ring, your video recording will be much more steady.

The camera is one of the few in this category that actually provides an EVF. The EVF comes with a proximity sensor and when it detects the proximity of something (preferably your face when you’re trying to look through the viewfinder), it automatically turns of the LCD and switches to the EVF.

The image is captured via the EXMOR-R sensor, which is a back-illuminated CMOS sensor that is claimed to be at least twice as sensitive as a conventional sensor, while introducing minimal noise. Other features include lens-shift IS, ISO 3200 support, a max shutter speed of 1/4000 of a second, 10fps full resolution burst mode (a commendable feat for this class of cameras) 1080p video recording with stereo sound, GPS, GPS and also, one of the highest resolution LCD screens in its class (9,21,000 dots). The camera also features various scene modes, a 3D still photography mode, sweep panorama and HDR mode. The HDR mode shoots 2 images at different exposures and then intelligently merges them together, the final image in this mode does come out quite well.

What is notable is the lack of a hot shoe for the flash. This isn't too much of an issue but for a camera of this caliber, we expected more.

The camera is also very well built. There is almost no flex and the hinge for the articulated LCD is quite sturdy. The LCD only flips up and down though, so it is not a fully articulated LCD.
The buttons are laid out well and there were no noticeable issues while we tested. Ditto the interface, intuitive and simple but featuring almost complete manual control. There is a dedicated button for video recording, which is a nice feature and something that we are seeing almost as standard in all current generation cameras.

For the video tests, we shot at least 4 videos at the HD resolutions supported by the camera (720p and 1080p). This camera aced all the video tests and came out scoring top marks in all our tests. The indoor tests showed a bit of noise but overall, the quality was better than most of the cameras in the comparison. There was no hunting for focus and the camera managed to focus reasonably fast.

Outdoor performance was even better. Noise was almost non-existent (in day-light of course) and as mentioned earlier, there was little or no distortion in the lens. Zooming was smooth and IS worked very well up to the camera’s max zoom of 30x. Zooming in and out wasn’t as fast as in photo mode, but this ensured that the zooming experience was smooth and stutter free.

The camera has no hot-shoe for an external flash, but the camera’s on-board flash works very well. Fill flash was good with our test scene being very well-lit.

The camera did very well for itself in the ISO tests as well. There was noise visible at ISO-800, but the aggressive noise-reduction system Sony employs, works quite well. A lot of detail is lost in the process, but the overall image is very much usable. Low-light shots were again very good. This is mainly owing to the EXMOR-R sensor that Sony uses. Noise Reduction reared its head again with images looking very soft, almost like a painting in some cases.The macro tests showed this camera performing well. Each individual pixel on the monitor we used was clearly visible and there was minimal barrel distortion in the image, unlike a lot of other cameras that we tested.

Outdoor shots showed a loss of detail at a 100% crop, and ended up looking very smudgy with barely any details visible on trees. Without cropping, the image looks fine.The camera gave a good showing in the sharpness tests. Images at ISO200 and 400 were quite sharp but again, noise reduction blurred out some details.