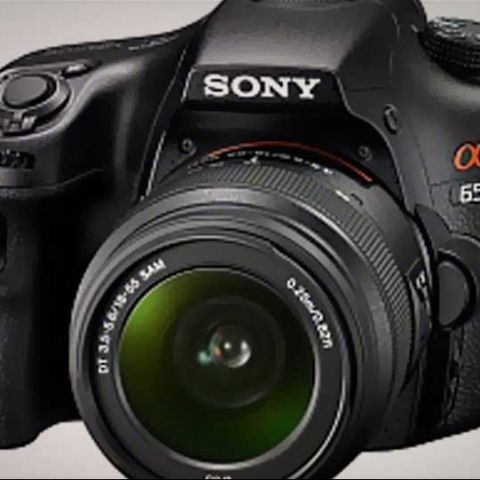 The Sony Alpha A65 offers very good features such as a blazing fast 10 frames-per-second burst rate, OLED electronic viewfinder, excellent video quality, variety of filters to play around with, hell even a GPS chip. Its image quality is really good and we did not see any issues with noise till ISO 3200. At an MRP of Rs. 59,990 we feel it makes for a good value for money proposition provided its MOP is around the Rs. 55,000 region. We would suggest you invest in a better lens to get the best out of this camera as the stock lens does not do justice to the camera. It does face some competition from Canon 60D and Nikon D5100, but none of them offer the kind of burst rate offered by the A65.

Sony has added another camera to its single-lens translucent (SLT) mirror technology cameras – the Alpha A65. On first glance it is quite reminiscent of the older Sony A55.

The A65 incorporates an electronic viewfinder (EVF) in place of the optical viewfinder and the mirror in front of its sensor is fixed and translucent allowing light to pass through – thereby differing from the DSLRs which employ a pentaprism and where the mirror flips to expose the sensor when the shutter is released. The Sony A65 was launched in India along with the flagship A77 (read our review).

Build & Ergonomics
The black body is all plastic with a neat rubberised finger grip in the front. There is an ergonomic depression in the finger grip which fits the fingers like a glove on the camera body. This is neatly complemented by the thumb grip on the rear side.

On the right hand side on the top, you have the shutter button surrounded by the power notch. In the front you have the adjustment dial. Coming behind the shutter button there is the exposure compensation button and the ISO button. Location of the finder/LCD button is very weird as you will need a really long index finger to access it. The mode dial is placed on the left hand side sporting two Auto modes, the P/A/S/M modes alongwith SCN, Panorama, and 10fps burst mode, among others.

Coming to the rear side, you have the 3-inch 921k Xtrafine LCD with TruBlack technology which ensures a screen with great contrast and black levels. The visibility in sunlight is not an issue. But the only irritating aspect is that the screen is hinged at the bottom, so shooting from the hip is decent, but when you align the screen perpendicular to the camera – such that the screen is tilted to the right hand side – then your hand grips makes it difficult to view the screen. It can get especially tricky when you mount the camera on tripod. We would have preferred a screen hinged to the side.

In the lower half you have the four-way D-pad which activated functions such as Display on the top, White balance on the right, picture effect mode at the bottom and drive mode on the left hand side.The central button pulls up the AF point selection mode, the AF area can either be selected using the adjustment dial in the front as well as using the four way dpad – once the AF area selection mode is activated, the four way keys become mere navigational buttons. The function button Fn is located just above the four-way D-pad. Pressing the Fn button will overlay your LCD screen or the EVF with as many as 14 functions, seven each placed on each side of the screen. Then using the four-ways keys you can navigate between them.

On the right hand edge, you have the SD card slot whereas on the left hand edge there is a lot of flaps. There is a GPS chip housed there along with ports for remote triggering, an HDMI-out port, a mic port, and finally a DC port.

Features
The Sony A65 houses a 24MP CMOS sensor with a maximum resolution going unto 6000x4000 pixels. It comes with the standard 18-55mm SAM kit lens (f/3.5 to f/5.6). The A65 comes with 15-point phase-detection AF system with 3 cross-type focus points. The AF area types is divided into Wide, Zone, Spot and Local. The local area provides a better control over selecting the focus area. The zone AF area divides the screen into three groups of focus points. There is no array-like arrangement of the focus points.

ISO goes all the way from 100 to 16000 whereas the exposure compensation goes from /-3 with 1/3 stops. Dynamic Range (DR) and Auto HDR functions offer various levels of shooting; DR range goes from level 1 to 6 whereas Auto HDR goes from exposure difference of 1EV to 6EV, thereby helping you better balance out the light in high contrast regions – getting more detail in shadows and highlights. Under Creative Style filters, you can further adjust contrast, saturation and sharpness; thereby giving the photographer more options to fine tune their images before post processing. The colour effects can be seen on the EVF as well. There is also a variety in terms of the drive modes – offering bracketing options for exposure as well as WB. You also have an option to activate wireless flash mechanism.

Performance
The burst shooting mode offers a whopping 10 fps which is the highest burst rate seen among this class of DSLRs/SLTs. But whether you are in RAW or JPEG mode, after the burst rate, you have to wait for quite a while for the processor to finish writing the images on the card. We were using the 4GB Sony SDHC card with a transfer rate of 15MB/s which wasn't enough thanks to huge image sizes.

The AF on the camera is quite fast, although not as fast as the EP3. We have yet to come across a camera apart from the Olympus OM-D E-M5 that has equalled or beaten the Olympus EP3s blazing fast AF. Having said that, there were very few situations barring extremely low lights where we found the camera hunting for focus.

Base ISO performance was quite good with clean images. Around ISO 800 you just start to notice very, very minute artefacts which become legible at ISO 1600, especially at the edges. The image is still usable at ISO 3200 though as you notice the noise only at 100 per cent crops. But ISO 6400 onwards, the image quality starts degrading and noise is easily visible.

Sharpness at the edges is a bit of a concern as we noticed some loss in detail around the edges in our sample shots. Centre sharpness is excellent.

Picture Effects offer a range of filters which are great to play around with. Presented below are sample shots with some of those filters activated.

We have always been impressed with the video quality offered by Sony cameras and the Alpha A65 is lives up to that. Thankfully, Sony offers the option of recording the video in the popular MP4 format as opposed to just the MTS format, but the disadvantage is that with MTS you get a lot more options such as 25p/50p/50i whereas the MP4 has only two settings 1440x1080 (12M) and VGA (3M). While shooting outdoors, there were no issues. Colour reproduction was good and panning was also very smooth. The microphone is not as good as we would have liked it. Indoor shooting is comparatively challenging with noise becoming very prominent.

Verdict
The Sony Alpha A65 offers very good features such as a blazing fast 10 frames-per-second burst rate, OLED electronic viewfinder, excellent video quality, variety of filters to play around with, hell even a GPS chip. Its image quality is really good and we did not see any issues with noise till ISO 3200. At an MRP of Rs. 59,990 we feel it makes for a good value for money proposition provided its MOP is around the Rs. 55,000 region. We would suggest you invest in a better lens to get the best out of this camera as the stock lens does not do justice to the camera. It does face some competition from Canon 60D and Nikon D5100, but none of them offer the kind of burst rate offered by the A65.