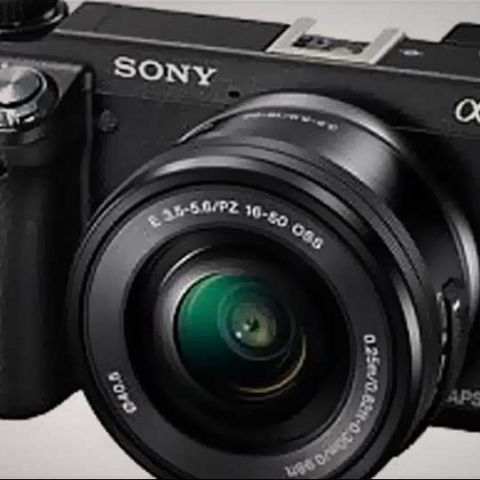 The NEX-6 is one power-packed mirrorless camera. It's got Wi-Fi, an OLED EVF with a crazy resolution, a tilt-swivel screen and great ergonomics. At the moment, the NEX-6 is one impressive camera for under Rs. 50,000 and we would strongly recommend people consider this as an alternate to entry level DSLRs.

Sony entered the mirrorless game long back with the NEX-3 and NEX-5 at a time when the mirrorless camera segment was a new born child. The segment held (and continues to hold) massive potential, and Sony recognizes it best. The NEX line-up of mirrorless cameras has quickly undergone several stages worth of evolution and today, we have the NEX-6. We love mirrorless cameras and we were eager to acquire the NEX-6 and put it through our tests to see whether it really lives up to its lineage and price tag.

Build and Ergonomics
The NEX-6 has a very premium finish, thanks to its plastic/metal construction. Despite the plastic parts, the NEX-6 doesn’t feel cheap or tacky in any part. The deep handgrip on the right has a lovely rubber textured that will ensure a comfortable grip. When the camera is used with the supplied 16-50mm f/3.5-5.6 OSS PZ lens, it balances beautifully, but swap that out for a longer lens (or a converter A – mount lens combo) and we get a greatly imbalanced camera. This shouldn’t be a problem for most people as we wouldn’t really be slapping a 70-200mm f/2.8 lens on this tiny camera and if we did, an imbalance in weight distribution is expected.

The NEX-6, being a mirrorless camera, is all about putting all the controls right in your hand, and it does just that thanks to the three dials and large number of buttons it’s littered with. The number of buttons that provide access to a set of features is too damn high, and can create confusion amongst users initially. While the “Fn” button provides quick access to the most commonly needed features such as AF and metering modes, it’s an unmarked button on the back that will take you into the camera’s actual menu. It takes some getting used to, but eventually, you should get the hang of it.

The new 16-50mm f/3.5-5.6 OSS PZ lens is an astonishing compact lens developed by Sony, which does away with all previous kit lenses. It utilizes a ring at the front of the lens as a zoom ring, which doubled up as a focus ring when in manual AF mode. Alternately the lens also has a vertical toggle switch for zooming. The compact lens also helps add to the incredible form factor of the NEX-6.

Features and Specifications
The Sony NEX-6 is essentially the NEX-7 without the mammoth 24 megapixel sensor. Instead, it utilizes a 16 megapixel slab of silicon for imaging duties and a Bionz processor chip to offload all the RAW data from the sensor to the memory card. The camera has a clever rangefinder-like design, but in operation, it follows more closely the design of a regular point and shoot camera from Sony. The rangefinder designation is courtesy an electronic viewfinder placed on the top left edge of the camera.

The EVF is quite an impressive little piece of tech in of itself, packing a whopping 2.3 million pixels into an OLED screen, which offers a 1.09x magnification. What that means is that no matter what the light conditions, the EVF will continue to show you a good view of what the lens is looking at. Previously, Sony’s cameras suffered from a somewhat lag-ridden EVF, but that doesn’t seem to be the case with the NEX-6.

The NEX-6 also retains the pop-up flash of the NEX-7, but for the first time on an NEX camera, we have an ISO standard hot-shoe to plug in regular accessories. Up until now, Sony had been using a proprietary hot-shoe, which prevented photographers from using their third party flashes and radio triggers. But now, Sony has changed the design to ISO standard, but the proprietary ports still exist for attaching microphones and other Sony accessories. This is great as it brings together both the ISO standards and Sony’s proprietary ports into one design, offering maximum expansion.

Focussing
The NEX-6 employs a hybrid sensor with dedicated pixels for phase detect AF. But it is also capable of contrast detection based focussing, so the two generally work together. In our testing, we mostly preferred using the Area Select AF mode, where we could select one point for the camera to focus on. This mode managed to lock focus every single time in light conditions that went from broad daylight to indoors to dusk. We showed up to a party being hosted in a dark room and even then, the AF managed to lock onto the people we were trying to photograph. Frankly, we’ve never seen a camera be able to lock focus onto subjects in near-pitch dark (unless it was a DSLR using the AF assist beam from a hot shoe flash), so saying that we’re impressed with the NEX-6 would be somewhat of an understatement.

The NEX-6 is also capable of AF tracking and shooting 6 frames per second, so we tried shooting a few of our biker friends as they rode past us, but we only ended up with 2 or 3 frames that were tack sharp with respect to focus (we made sure we shot at adequate shutterspeed). It’s not an AF system for the sports shooter, but for the casual photographer, it should be more than adequate to shoot bridges from a moving car.

Image Performance
Sony has the long standing reputation of manufacturing sensors for Nikon’s DSLRs and not to mention, their key role in developing the Back-Side Illuminated Sensors that have become a standard in almost every high end cellphone and point-and-shoot camera. So, when Sony packs a 16 megapixel CMOS sensor into the NEX-6, we definitely had high expectations.

The images out of the NEX-6 tend to be slightly more saturated than many would like. If you’re a fan of the typical “Nikon colours,” then the NEX-6 would win you over almost instantly, but if you prefer to get slightly flatter colours and contrast in your RAW files to begin with, then you might want to resort to custom picture styles to tone the contrast and saturation down. One way or another, the NEX-6 is versatile enough to offer the kind of colour and contrast levels that would cater to pretty much everyone who has a taste for specific colour tones.

The one area where we did notice some problem was with respect to vignetting. The 16-50mm f/3.5-5.6 lens has a tendency to add a strong vignette to those shots which are captured at 16mm. The vignette disappears around 20mm onwards, but is quite noticeable under that focal length. We processed our files in Lightroom, which does have a lens correction profile for this particular setup which removed the vignette, but not everyone who owns (or will own) the NEX-6 will own a copy of Lightroom.

Low Light/High ISO Performance
The NEX-6 has a native ISO of 6400, which is expandable to ISO 25,600. Expandable ISO range is generally a controversial specification, as these numbers don’t strictly adhere to the ISO standards, and are therefore implemented in software and not hardware. Keeping that in mind, we limited our ISO testing to just the native numbers and the NEX-6 once again delivered strong.

The ISO 6400 shots from the NEX-6 contain film grain noise that is visible when viewed at 67% or above, but the images are solid for small prints. The shadows are the quickest to develop noise, but the highlights tend to retain their details quite well. This is of course applicable to when shooting in RAW, as Sony’s noise reduction algorithm for JPG files is quite aggressive. ISO 6400 JPGs from the NEX-6 have very muddled details, due to the noise reduction being applied in camera, so we strongly recommend sticking to shooting RAW and processing the files in Lightroom for noise.

Video Performance
Sony has a long standing history of making some great video cameras, and they even recently launched the VG900, their first full frame video camcorder. The video out of the NEX-6 is excellent, though the video recording button is awkwardly placed and is a little hard to press. However, shooting movies with the NEX-6 can be done in two ways.

Movie recording can be engaged in any mode, by simply pressing the movie record button, but the footage will be recorded in auto mode, with the user having no control over the settings. However, if the mode dial is turned to “movie,” then the NEX-6 will offer all controls to shutterspeed, aperture and ISO. The footage, if exposed correctly, reflects the same quality as the photos, that is, being well saturated with a strong contrast. The Dynamic range on the NEX-6’s video is also surprisingly very good, making it a good camera for indoor filming. Watch out for the sound though, as the microphone on the NEX-6 is mounted on the front of the camera and thus tends to pick up wind rather easily, so make sure you have the wind cut filter enabled.

Conclusion
The NEX-6 is one power-packed mirrorless camera. It’s got Wi-Fi, an OLED EVF with a crazy resolution, a tilt-swivel screen and great ergonomics. As for performance, it’s got very impressive image quality and coupled up with a superb AF system, we see the NEX-6 being a massive hit in the mirrorless segment. At the moment, the NEX-6 is one impressive camera for under Rs. 50,000 and we would strongly recommend people consider this as an alternate to entry level DSLRs. Sony already has an extensive lineup of lenses ready to launch for the e-mount in India, and not to mention that any of their A-mount lenses can be used with a converter on the NEX-6.