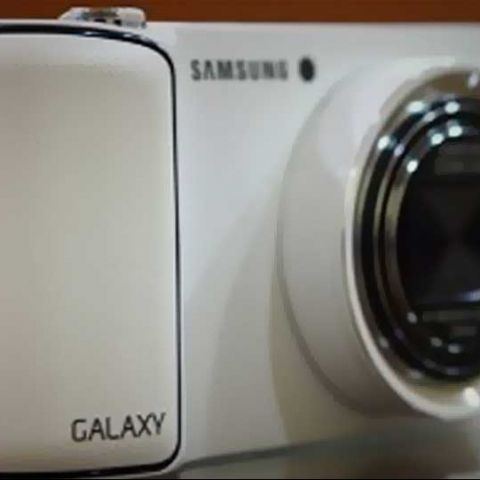 Galaxy Camera is Samsung's attempt to strap a camera-sized sensor onto the Galaxy S III, whilst stretching it out a little. We received this camera not in a box made of cardboard, but in a case made of doubt and disbelief. We had very little faith in this camera, but after playing with it for many days weï¿½re very surprised as to how well this camera performs, not just as an Android-powered device, but also as a camera. But is it worth the Rs. 29,850 price tag? Well, read on to find out!

In one of our opinion pieces, I wrote how cameras are evolving beyond what they are. We’ve seen GPS chips become a standard in point-and-shoot cameras, which adds one more way in which your privacy can be violated. It’s also a good gimmick to price cameras at a higher price point. Just because it’s a new feature, does not mean you would need it.

Since GPS in cameras had this one reviewer a little peeved, can you imagine his emotions when he heard of an Android-based camera? Once the deep pondering about the consequences of such hybridization was over, we figured we’d get our hands on the cameras and play with them to see how they perform, regardless of the OS they ran. The first of the lot was the Nikon Coolpix S800c, which as per our review is an average performer, but way behind on the times. It runs Android 2.3 (Gingerbread) and froze a lot! This is the stage that was set for us when we received the Samsung Galaxy Camera.

Build and Ergonomics
Once the Samsung Galaxy Camera was in our hands, our emotions were quick to turn. The Galaxy Camera is like a sleek block of white brushed plastic that you feel is just solid from the front to back. Speaking of the back, it’s just one large 4.8-inch touchscreen (the same as the Galaxy S III) with a 306ppi pixel density. There are no dials, and just three buttons in total. On top you will find the shutter button along with the power button and on the left edge of the camera sits the button to raise the flash. Other than that, the bottom flap incorporates the battery, microSD card slot, a slot of the SIM-card you’re going to use to make this camera 3G-capable and a mini-HDMI port.

The build of the Galaxy Camera is absolutely solid. We didn’t, even for a minute, feel like we had to treat it like it was made of glass (which is generally the case with a lot of point and shoots). The choice of matte white with a sliver of deep blue running along the edge of the camera and grip is also a nice touch, which lends to the minimalist design of the Galaxy Camera. The camera is very comfortable to hold and not too heavy. It’s quite thin, so it will easily slip into a pocket, but also rather long so chances are, you might not manage to stuff anything else in there.

There’s a ton of reviews that have detailed just how good Jelly Bean is as a mobile operating system. With the infusion of an Android OS into a camera, what Samsung has successfully managed to do is bring a very familiar interface to a device that’s often been sort of a mystery to many. We asked a few people we know to play with the camera (making sure these were people who weren’t very familiar with cameras) and the first thing they said was “Oh! Android!” They managed to shoot photos rather easily and even managed to go through the photo roll. We realize that an OS which is so familiar to so many people does have some value to add to the camera, at least in terms of ease of use.

Android also meant full access to Google’s Play store, from where we downloaded Facebook, Instagram and a few other editing and shooting apps. One major issue we had with the Nikon S800c was its poor ability to run Android apps, as they kept crashing and photography apps often failed to communicate properly with the camera. We’re not sure whether it’s the Jellybean or Samsung’s genius, but we had absolutely no crashes or lock-ups. Even the 360 Panorama app worked beautifully, utilizing the camera without any hiccups, something the Nikon S800c failed at.

All in all, Samsung has implemented the Android integration into the Galaxy Camera quite well, as the camera UI is fast, fluid and very responsive. As a user interface, it’s wonderful to have on a camera and definitely adds more value with its ability to utilize the power of thousands of apps available on the Google Play store.

Image Quality
Regardless of what OS a camera runs, at the end of the day, its job is to produce images, or rather, good images. In the past, we’ve had the chance to review a couple of Samsung cameras and we were far from impressed with what the cameras could achieve, regardless of their price point. So again, when we received the Galaxy Camera, we expected to see sub-par performance. What further added to our scepticism was the fact that all the components, right from the sensor to the lens are Samsung made. We couldn’t decide whether it was a good thing or bad that they had decided to forego the Schneider optics for a home-grown lens.

Well, all we can say is that we’re glad we have an open mind. From the get go, the Galaxy Camera kept on throwing one surprise our way after another. For starters, once the camera starts up, it takes hardly any time to lock focus and shoot. We were quite surprised with the focusing speed of the Galaxy Camera, even in low light. So, shooting indoors with regular house lighting shouldn’t be an issue. However, we were a little disappointed with the focus hunting at a local club which was not so well lit.

While the focus on the Galaxy Camera is definitely something to look forward to, the imaging capabilities of the Galaxy Camera are no less. The 16 megapixel BSI sensor produces surprisingly detailed images, with very little JPG artefact. This is mostly surprising to us because on a 1/2.3 inch sensor, we’re normally used to seeing some heavy JPG compression artefact. Of course, this wasn’t the case when shooting in low light, as the Galaxy Camera did apply some heavy noise reduction algorithms to keep the ugly red-blue dots at bay. While the images remained noise free throughout our shooting test, we did notice a serious degradation in the level of detail that was being left in the images. However, using the flash tends to sort out the noise reduction issue, but even then, the flash is somewhat harsh if you’re close to your subject.

We’re going to break away from the image quality for a bit and talk about the lack of dials. The Galaxy Camera is an all touch camera, with a touch shutter (though there is a physical shutter button and zoom toggle). It also offers various shooting modes, which must be accessed through the camera’s touch interface. Though the interface is quite clean and user friendly, alas, it is not very speedy. Switching from one mode to another does take up time, and this time could potentially mean that a precious moment has been lost. Regardless, if speedy shooting isn’t what you need, Samsung has bundled in a couple of really good shooting modes that can help in nailing the shot in all sorts of light situations. Our favourite is the macro mode, which puts the camera really close to the subject you’re trying to photograph and the 16 megapixel sensor ends up capturing some exquisite detail.

The video on the Galaxy Camera is also pretty good when shooting in good light, with a mic that is pretty effective at reducing wind noise. However, we would strongly hesitate taking this into a noisy venue, say like a dimly lit club with a rock band having a live jam session. The video was very quick to develop noise in the red channels and the shadows, while the audio become completely unusable.

Bottom Line
The last two Samsung cameras we reviewed were quite a disappointment. The Nikon S800c we reviewed was also a disappointment. So when we got a Samsung made Android camera phone, resigning ourselves to little to no expectations was only natural. However, as we used the Samsung Galaxy Camera, we were hit by one surprise after another.

Not only is the Android implementation absolutely wonderful (and why wouldn’t it be? These guys made the S III) but even the camera itself is quite good. The detail and colour rendition in the images we’ve seen from this camera have been nothing short of jaw-dropping, for a point and shoot camera with a tiny sensor. We did find the lens to be just a tad soft throughout the focal range, but it’s not something one would notice at web resolution, or even on prints. We feel it’s important to point out that the images can also be sharpened in post-production, if you’re into that sort of thing.

Last but not the least, the Android OS coupled up with Wi-Fi and 3G is absolutely wonderful. Enabling instant DropBox upload means you always have a backup of your images, in the event that you absentmindedly format your memory card (like we did once). You can even directly upload the photos to Facebook (if you’re just that compulsive) and even send them out over email. All in all, the Galaxy Camera is an Android Camera done right. Sure, it needs some tweaking with respect to aperture and lens sharpness (and hopefully a bigger sensor), but this is definitely a strong first step for Samsung.