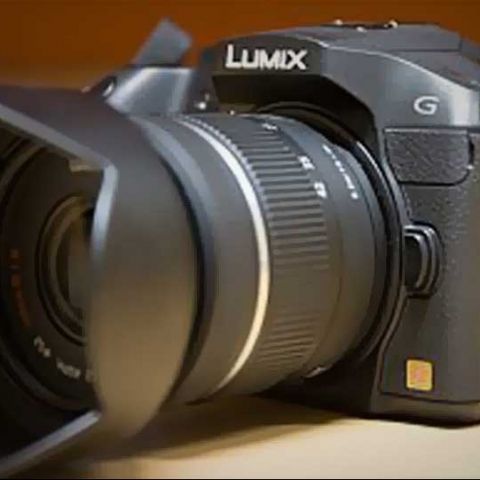 The Panasonic Lumix G6 is full of surprises. It features the sensor from the old GH2 augmented by a powerful new Venus Engine image processing chip. The camera gains a much faster and more sensitive AF system which, surprisingly, lives up to every claim. However, when it comes to low light, the AF may keep up with the dingiest of lighting, but the sensor starts to falter and generate noise. It does capture some incredibly great footage though, and couple that up with the DSLR-like form factor, it just might be the camera amateur film enthusiasts need to kickstart their projects.

The Panasonic Lumix G6 is the fifth model in the series (Panasonic skipped out on a G4), and it looks and feels a lot like its predecessors. It continues to follow the DSLR style build, which is something of a deviation for a mirrorless camera, but given the amount of power and features it packs, one might be inclined to overlook the large-ish size. The new camera comes with a host of improvements and new features such as Wi-Fi and NFC, but do they come together to make the Panasonic Lumix G6 the camera of choice for your mirrorless needs?

Do note, Panasonic has yet to announce India pricing for the Lumix G6, and we will update this review once we receive it. In the meantime, our value rating are based on the pricing of the Lumix G5, the G6’s predecessor.

The Way It Feels
The Panasonic Lumix G6, surprisingly, is a rather well designed camera. We’ve always had our beef with entry-level DSLRs for not fitting rightly in our hands, and the G6 is even smaller. However, it is just small enough to let the three of our fingers comfortably rest on it while the little finger comfortably folds in on our palms. Entry-level DSLRs often obstructed the little finger, with not enough space to accommodate it fully, but also more than enough space to keep it from reaching its natural rest state.

The back of the Lumix G6 is adorned with buttons. It’s like someone told the design guys at Panasonic that buttons were the new bling. The back of the G6 has seven buttons, not counting the 4-way-button in the centre we find on all cameras. This might seem a little intimidating to new users, but we assure you that getting used to theses buttons will not cost you more than two successful photowalks. The viewfinder on the G6 sticks out noticeably, but doesn’t obstruct the natural flow of using the camera. We think the reason for the viewfinder sticking out is the eye sensor and the stereo microphone array that rests just under the pop-up flash.

The Panasonic Lumix G6 is wholly made of plastic encased in a really nice rubber finish. The G6 is incredibly well-designed with respect to balance, in that the body weight has been kept down thanks to a plastic build, and mounting even the heavier 35-100mm f/2.8 lenses doesn’t throw the camera off its game. The only serious gripe we had with the ergonomics of the G6 was with respect to the Intelligent Auto mode button, which is placed right next to the video record button and is quite easy to mix up. Wish Panasonic would address this in the next iteration of the camera.

The Bells, the Whistles and Then Some
The Panasonic Lumix G6 might come with the GH2’s sensor (which was pretty damn amazing to begin with) but it also comes with a host of other improvements. For starters, this little guy packs in built in Wi-Fi capabilities and an NFC chip. Between the two of these technologies, Panasonic has ensured that you get your photos off the camera and onto your smartphone almost instantaneously. The only drawback is that in order to use this transfer method, you must download a Panasonic proprietary app, available for Android and iOS. If you’re a Windows Phone user, you’re unfortunately out of luck and won’t be able to use the extensive features of the app such as remote shooting, which can be extremely handy.

The electronic viewfinder in the Panasonic Lumix G6 sports a 1.4 million dot resolution, which we found to be incredibly clear, sharp and responsive even in low light. This is somewhat rare to find in cameras that use EVF technology, as the low light situation tends to generate a lot of noise. The G6, however, is impervious to such effects.

The Panasonic Lumix G6 is also using a brand new Venus Engine image processing chip, which allows it to more efficiently deal with noise and deliver a decent burst mode of 7 frames per second in Single Shot AF mode. The Venus Engine also allows the Lumix G6 to gain 19 new image effects that can be applied not just to standalone images, but also to panoramas that the camera shoots.

Last, but definitely not the least, is the amazing touchscreen LCD on the back that tilts and swivels. However, the best feature that Panasonic has packed into the touchscreen is the ability to move focus points by just dragging your thumb across the screen. The level of convenience this feature brought to our shooting experience simply cannot be summed up in words.

An AF System to Make Your Neighbour Jealous
The Panasonic Lumix G6 has a new autofocus system and while Panasonic kept claiming that it is incredibly reliable, we wouldn’t have any of it till we actually tested it out for ourselves. To begin with, we put on the 8mm f/3.5 Lumix G Fisheye lens onto the camera for some landscape work. Normally, when a camera is asked to focus using wide angle lenses, it ends up locking onto whatever is closest. This often leads to images which tend to have the actual subject out of focus, so we figured this would be a good test for the G6. We used the touch method to set our focus point to the desired location and fired off the shutter. Focus acquisition was almost instantaneous (as can be expected from a fixed lens) and the camera fired of in under a second.

Switching out to the telephoto 14-140, we found the AF performance to be just as quick and accurate. Things changed once the sun went down. The AF performance on the Panasonic Lumix G6 is rated to be effective even at -3eV, a feat that currently is achievable only by the Canon EOS 6D. Normally, camera AF systems are rated for 0eV or up, with some high end DSLRs even boasting of a rating of -2eV, but -3eV is a pretty big deal. In our testing the G6 definitely managed to lock focus in light so low, that even we had trouble keeping up with our subjects.

The AF on the G6 is indeed quite accurate and besides being fast, it is also rather versatile. It offers a total of 5 focusing modes, which include single point tracking, facial tracking, 23 area, single area and pinpoint.

Small Sensor, Big Performance
The sensor on the Panasonic Lumix G6 is of the Micro-Four-Thirds standard, which now happens to be the smallest in the mirrorless segment, but that doesn’t limit its performance in any way. We shot locales in beautiful Bali with the Lumix G6 and came back wildly impressed. For one, the camera has a green bias, so if you’re a landscape buff, you’re going to absolutely love how plush the greens look on the camera. Just to clarify, the camera is not rendering a green cast, but instead, it just does a great job of capturing the greens, something we’d expect from all cameras seeing how their sensors are 50% green pixels!

In terms of dynamic range, we found that under harsh lighting, it really comes down to expertise in metering. Multi-scene metering will most definitely end up blowing your highlights, or underexposing to a point where the entire foreground gets lost to shadows. Switching to spot or centre-weighted definitely yielded much better results. If you pair up the Lumix G6 with a good lens (which most Panasonic lenses are) then you’re looking at an incredibly powerful tool for making great images.

Talking about specific image parameters though, the Lumix G6’s image filed do tend to suffer from slightly lower dynamic range than we’re used to seeing on mirrorless cameras from Sony and Fujifilm, although that is expected seeing how the sensor on the G6 is smaller than the competition’s. That being said, it is important for us to point out that the G6’s dynamic range values aren’t low by any means. The colours pop, the contrast is good (even under harsh sunlight) and we wouldn’t hesitate to shoot just JPGs with this camera.

The video output from the Lumix G6 imbibes the same qualities as the photo quality, but the G6 does a lot more with the video when compared to its predecessors. For the first time, the camera brings full manual control to video shooting, along with the ability to apply creative filters to the footage. The stereo microphones do a rather good job at picking up audio, but we wouldn’t recommend using them for professional use. Towards that, Panasonic has also included a microphone jack on the side of the camera so you can plug in an external mic for better audio.

Conclusion
The Panasonic Lumix G6 is yet to hit the Indian market and when it does, we recommend you consider buying it. It rubs shoulders with the other mirrorless cameras in the market such as the Olympus OM-D E-M5 and the Sony NEX-6, and while it may not necessarily match up to the NEX-6’s might, the OMD E-M5 just might be running the risk of facing competition.

The G6 is a really good performer, not letting us down in almost any condition. We wouldn’t rely too heavily on it in situations of low light where we need to bump up the ISO, unless we had some really fast aperture prime lenses. The NEX-6 or the Fujifilm X-E1 might be a better alternative if low light is your primary shooting style.