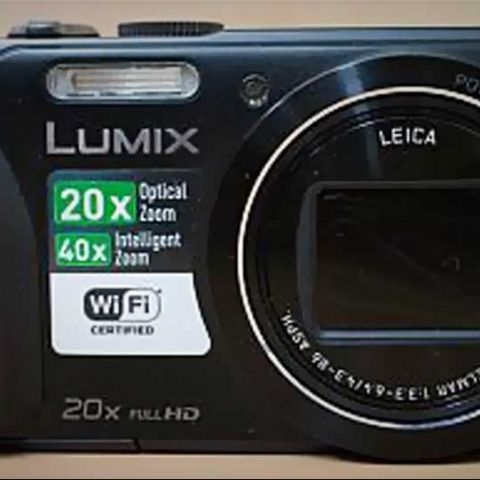 For the price of Rs. 25,990, the Panasonic Lumix DMC-TZ40 makes a compelling argument as a good purchase. Do we like it? Yes. Is it perfect? No. All in all, it's a really fast travel zoom and we do recommend you get yourself one if you're in the market to buy.

Panasonic may not be as big as Canon or Nikon or Sony when it comes to point and shoot cameras, but that doesn’t mean they are to be discounted without a second thought. The company has a long standing tradition of producing greats like the LX7, and not to mention, pioneering the mirrorless camera segment. So, when Panasonic calls us and say they’ve got a new camera in stock, we’re more than eager to go ahead and review it. Besides, it’s hard to turn down a camera that ships with Leica branding.

Body and Ergonomics
The TZ40 is a rare species, in that it has a full metal construction in a time and age when cameras have switched over to plastic as the preferred material for construction. The metallic build does lend the camera an incredibly solid structure, although dropping the camera is something we strongly refrain from doing.

There is a soft rubber grip on the front of the camera, which we didn’t like a whole lot. Not just because it lacks an ergonomic design, but also because it is made of an extremely soft material which provides very little grip. Over an extended period of time, we are afraid that it is entirely possible the camera might slip out of your hands if you’re not careful.

The top of the Panasonic Lumix DMC-TZ40 has the standard mode dial, shutter button, zoom toggle, power button and a dedicated video recording button. We got to test a black coloured unit of the camera and what we really liked was the dark grey colour of the shutter button, which made it stand out, but not so much that it would become distracting. We definitely like this aesthetic touch.

The back is littered with buttons for various functions. Interestingly, there is a dedicated button to turn the directional keys into the aperture and shutter speed controllers. We feel that Panasonic could have instead used a little dial on the back instead of adding another button. In fact, there is also a dedicated button for Wi-Fi, something that could go either ways with the audience. Even though it increases the number of buttons on the back, we must say that Panasonic has made sure it does not look cluttered. The buttons are easy to push and don’t feel like cheap plastic at all.

Features
The Panasonic Lumix DMC-TZ40 incorporates an 18 megapixel high sensitivity sensor along with an updated Venus Engine processing chip, which together allow the TZ40 to achieve a blazing fast 10 frames per second. The camera can also be pushed to shoot 40 and 60 frames per second, but in that case, the focus gets locked and the resolution is greatly reduced. Regardless, we love being able to shoot at 10 fps (6 fps if you also want full AF tracking).

The TZ40 doesn’t have just one big USP, but instead, several relatively smaller ones. The 18 megapixel sensor is one, the 20x optical zoom lens (24-480mm f/3.5-6.4) is another, but there is more. The TZ40 also comes with onboard Wi-Fi, GPS (with GLONAS support) and NFC support. The Wi-Fi works in several ways, being able to connect to an existing network, or the camera can create its own hot-spot. Regardless of what method you choose, you will be able to engage remote shooting, transfer of images already shot from camera to phone (or PC), the two most useful features.

The GPS chip has a database of about a million popular locations already fed into the chip (Panasonic claims so) so you should be able to geotag your images with ease. We’ve maintained that geotagging of images wasn’t an essential feature for cameras, but rather just fluff, but if you are absolutely ardent on having the location information saved in your photos, then the TZ40 will not disappoint.

The NFC on the Panasonic Lumix DMC-TZ40 also works very well, the only problem being that the NFC communication actually will take you to a download page for the Panasonic Smart App, which is currently only supported on iOS and Android (no Windows Phone). The app facilitates the transfer of images over NFC to the phone if you need it, with the only problem being that no Apple device supports NFC, leaving the option useable only to Android users.

Lastly, the Panasonic Lumix DMC-TZ40’s screen has gotten a serious upgrade too, retaining the touch functionality (which seems to have also improved), having the resolution bumped up to 920K dots from the 460K dot on the TZ30.

Performance
We will look at the performance of the TZ40 broken down into a few basic sections. First, we will discuss its speed and AF performance, since these are two critical factors in ensuring you get your shot when you need to. The TZ40 has a moderately fast startup time, going from off to taking a shot in under 2 seconds. Most of the time is spent in driving that 20x optical zoom lens out of its housing, with the AF taking hardly any time to lock on. In fact, the AF on the TZ40 is surprisingly fast, regardless of whether it selects the AF point for you, or you use the touchscreen to select a custom AF point. Daylight performance of the AF module is excellent, but it dips ever so slightly in low light. When shooting in low light, it is absolutely essential to have the AF assist beam on as the AF will just not lock focus if you’re shooting in very low light (such as a street barely lit by a street lamp).

On the photography front, the TZ40 doesn’t disappoint either. It spits out JPG files (we wish it shot RAW) of great quality, which established a solid interplay between the Leica optics and the new high sensitivity sensor. On the face of it, the images are tack sharp regardless of what aperture they were shot at (although sharpness did increase after stopping down by a stop). What had us impressed was the fact that even at the full 20x optical zoom, the image rendered by the lens was sharp and free from aberration. This is surprising to see in a camera in this league.

In terms of colour depth and contrast, the images we shot at stock (neutral) settings came out looking incredibly good. The contrast levels was just right (slightly higher than normal, for better separation). The colour saturation is also pretty good, but that could be due to the fact that we shot under an overcast sky. Regardless, the Panasonic Lumix DMC-TZ40 allows you to tweak the settings around so you get the perfect colour and contrast tone. If that isn’t enough for you, the TZ40 also comes with 19 built-in scene modes along with several creativity modes, including in-camera HDR and a Toy Effect filter, which we became particularly fond of.

Let’s move on to video now, shall we? Here is the resolution and frame rate the TZ40 is capable of: “1920 x 1080 (60 fps), 1280 x 720 (60, 30 fps), 640 x 480 (30 fps), 320 x 240 (220 fps).” Let that sink is for a minute. For the price, you’re getting all the important resolutions and more frame rates than your video editor could possibly handle. It also gives you enough wiggle room to shoot video that can be converted to slow-motion footage. Daytime footage is quite impressive, something Panasonic has sort of developed a reputation for, but sadly, the small 1/2.3” isn’t competent enough to keep up with the low light duties. The relative small starting aperture f f/3.5 doesn’t really help either, but for those who’re more keep on just “making sure they have the moment captured” rather than have it be impeccable quality, the TZ40 should suffice.

Conclusion
For the price of Rs. 25,990, the Panasonic Lumix DMC-TZ40 makes a compelling argument as a good purchase. Do we like it? Yes. Is it perfect? No. It isn’t a great performer in low light situations, both with the noise and slow apertures. It has a lot of creative and scene modes, but the lack of an intuitive control for aperture and shutter speed bother us. However, it’s the menu that gets to us the most. If we ignore the poor menu design, the camera isn’t half bad, especially given the Leica optics. The images are sharp and carry a fairly good amount of detail thanks to the 28 megapixel sensor. All in all, it’s a really fast travel zoom and we do recommend you get yourself one if you’re in the market to buy.