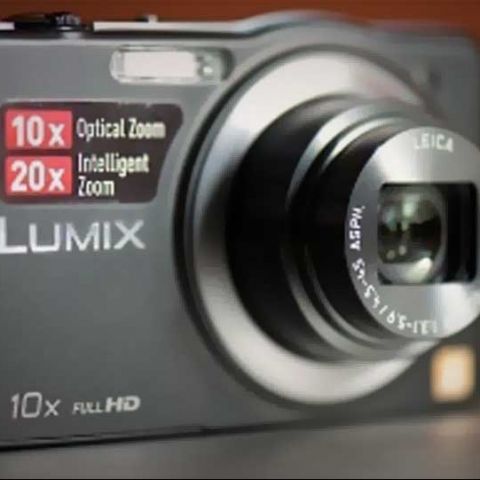 Paying Rs. 13,000 for a camera that can hide unnoticeably in our pockets, while packing a 10X optical zoom Leica lens along with a 14 megapixel sensor seems like a great deal! This is definitely one of the slimmest and the lightest travel zoom cameras we've played around with, bur, there a nagging question remains - "does a cheaper price also mean cheaper performance?" The answer to that question is a little more complicated than a simple yes or no, but the bottomline remains, if we needed a travel zoom under 15K, this is probably the one we'd go for.

In fact, Panasonic was the first company to launch a true “travel-zoom” camera, the DMC-TZ1, which ruled the roost for a while, at least till the other camera makers, could play catch up. Today, we look at the Panasonic DMC-SZ7, a long departure from the TZ1 of 2006, but yet, very similar in many regards.

Build & Ergonomics
The first thing you’ll notice about the Lumix SZ7 when it is pulled out of its cardboard box, is its ridiculously thin and small form factor. For a minute, we scratched our heads, wondering if the claim of the 10x optical zoom was real or not. It is also extremely lightweight (we played a 15 minute game of basketball without realizing the camera was in the pocket of our shorts) despite the battery and the SD card being in the camera.

The body of the Panasonic Lumix SZ7 is made of high-grade plastic, which feels rather sturdy. While we wouldn’t drop the camera (we love our toys way too much to let them take a tumble), we’re pretty confident it would survive a small drop or two, even if not cosmetically. The black body of the camera is supplemented with slate grey metallic bevels that adorn the sides of the camera , giving it quite an elegant look overall.

The button layout on the top is absolutely minimal, with just the on-off switch, the shutter button, the customary zoom control and a dedicated video recording button. The back features the usual dial that can be spun to sift through options. There’s also the usual menu, display and mode buttons that do pretty much what their name suggests.

The overall build is sturdy and the camera feels good in the hands. It’s just the right amount of “light” for its dimensions, not too heavy, not too underweight. Even at the various focal lengths with the zoom barrel extended to different lengths, the camera doesn’t become unbalanced.

Performance
We are always sceptical about gadgets that seem too good to be true. With a travel zoom this size, we were left wondering whether Panasonic had dumbed down the innards of the DMC-SZ7, so we picked it up and took a long walk through the city, taking a lot of random (well thought out, of course) shots. We started with the standard image quality assessment at the wide and telephoto end, with the Leica lens performing rather well in keeping sharpness at the centre and the edges intact. Of course the centre was sharper than the edges (as it is to be expected), but that doesn’t mean that the edges seemed lacking in any way.

Macro shots revealed that the DMC-SZ7 lens has a barely noticeable barrel distortion, which is great! Don’t want that regular house fly looking like an over-fed, well-taken-care-of house pet now do we? Shooting under the mid-day sun, we did find that the camera’s ability to handle dynamic range isn’t all that stellar, with the emphasis being more on retaining/exposing for highlights than shadows. Of course, when exposing for shadows, the highlights in all our shots were consistently blown out.

The one issue we did encounter during shooting was with the LCD screen. The Panasonic Lumix DMC-SZ7 employs a 460K dot TFT LCD screen, which in several scenarios, tended to exhibit a lag or jitter under several shooting conditions. For example, when we were zoomed into a scene that was low on illumination or just when we tried to pan around too quickly, the screen would not work fluidly. Unlike its elder siblings, the TZ20, TZ25 and TZ30, the SZ7 does not include a touchscreen, which we feel is a good thing especially given how the screen can become sluggish in just rendering the lens view.

Moving into the studio for our customary test target shots, we examine the SZ7’s ISO performance at each of its ISO 100-3200 steps. While JPG compression artefact is present in all images when viewed at 100%, the aggressive noise reduction becomes a prominent around ISO 800. At ISO 1600, the JPG artefact is enhanced due to the aggressive noise reduction algorithms, giving the details in the images a smudged look. The images at ISO 3200 convinced us to use it only in dire emergencies, as a last resort.

In terms of sharpness, well, there’s only one word – Leica. Leica has always had quite a reputation for superior optics and Panasonic’s association with the wonder-boy of lens-making has made it possible for Panasonic to really shine with respect to sharpness. The centre sharpness as revealed in our studio tests holds strong through the entire ISO range. The edges also held their own, being not as sharp as the centre of course, but still sharp enough to look good in large prints.

The SZ7, like most point-and-shoot digital cameras these days, is capable of shooting full 1080p HD footage, though the smaller sensor limits the quality of output. The video recorded at full HD resolution (30 fps) is encoded at roughly 14mbps, meaning, the quality is just a little over average (GOOD Full HD footage is shot at 1080p encoded at 24mbps). We’re not really sure if it was a problem with our unit or just a general problem with this series, but the camera tended to underexpose by about 1/3 of a stop while shooting video. This wasn’t much of a problem during brightly lit day-time shots, but when shooting in low light, the level of noise would rise significantly. The audio, however, was of surprisingly good quality, thanks to the stereo mics.

Verdict
The Panasonic SZ7 is a gorgeous little camera that can become incognito the minute it slips into your pant pockets. It rocks a 10x Leica lens and a 14 megapixel sensor, all packaged into a slim package for a small price of Rs. 13,000. However, with the SZ7, you get what you pay for. There is obvious JPG compression artefact and the noise performance at ISO 1600 and above isn’t great. The video is great in normal lighting, but once the illumination dips, the video quality dips with it. Despite the shortcomings, the SZ7 is a great travel zoom camera, especially if you’re looking to pick up a camera on a tight budget.