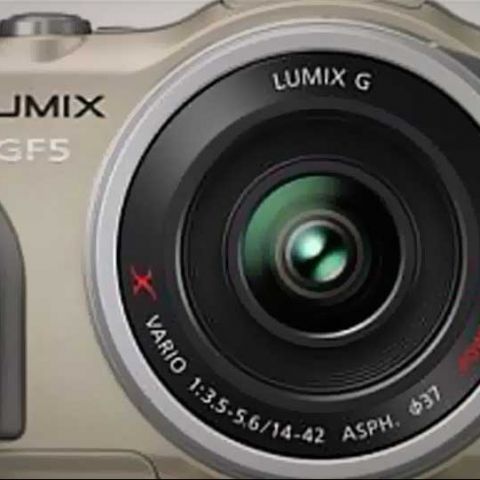 The Panasonic Lumix GF5 is an ideal mirrorless camera for someone wanting to upgrade from a point and shoot, but does not want the heft of a DSLR. Two intelligent auto modes, 14 creative filters, 23 SCN modes ensure that this is meant for the amateur user. Image quality is very good. Placement of the power zoom and manual focussing dials will take some getting used to. Video quality is average at best. Makes for a great first mirrorless camera purchase, but at 49,990, it is still priced on the higher side as it is competing with the Olympus E-P3 which is a good ILC as well.

Panasonic’s new mirrorless ILC, the Lumix GF5, features the same sensor as its predecessor, the GF3, but with contrast-detect AF. Its many filters and presets, along with intelligent auto options, should make it ideal for the amateur users. If the Lumix GF3 is anything like its predecessor, it should also deliver impressive image quality. Read on to find out just how the Lumix GF5 fares through our comprehensive review.

Build and Design
The Lumix GF5 has an aluminum body has a rectangular shape with a circular shape on the top portion. On the right hand side of the camera you will find a pronounced bulge which acts as a palm grip allowing one-handed operation of the camera easily using three fingers with the index finger on the shutter. Other than the lens-release button on the left hand side and the auto-focus lamp on the top left hand corner, the front portion of the GF5 is pretty clean. Coming to the rear side, you get a 3-inch 920k-dot touchscreen LCD. The thumb-rest on the top right hand corner protrudes just enough to improve the grip on the camera while making photographs. Below the thumb-rest you have navigation wheel surrounded by circular buttons. The layout of the buttons and the navigation wheel is quite intuitive. The metallic wheel houses the drive mode, exposure, white balance and focus area buttons on all four corners with the center button leading you to the main menu. The two left button is for reviewing pictures, the top right button is for displaying the shooting options and the lower button is for deleting photographs in the review mode or accessing the most used menus in the shooting mode.

The top strip of the GF5 houses a stereo microphone and a speaker section on the left hand side and a pop-up flash in the center. On the right hand side on the top you have the shutter button, the power switch, dedicated movie-record button and dedicated Intelligent Auto mode button all clubbed together. There is no dedicated mode dial on the camera which is a bit sad, but honestly there is just not enough space to house it on the top.

The camera ergonomics are quite good, with a great grip in the front, ample space for thumb rest and easy access to the navigational when and the buttons around it. We found issues with the ergonomics of the kit lens though.

Lens
The Panasonic GF5 comes bundled with a Lumix G Vario PZ 14-42m F3.5-5.6 kit lens where the PZ stands for Power Zoom. It comprises 9 elements arranged in 8 groups which includes 4 aspherical lenses and 2 ED lenses. It has a two notches on the left hand side one for motorised power zoom and the other for adjusting the focus. While the power zoom notch is well placed and gives a much smoother zooming experience as compared to a zoom ring, we found the placement of the manual focus notch to be worrisome. When the camera is in Manual Focus mode, on adjusting the Focus notch on the lens, you get a magnified view of the area you are focussing on. So as you are adjusting the notch, you will invariably end up shaking the lens which can be distracting as you are trying to get a proper focus. Also getting used to the speed of the notch movement will take some getting used to.

Features
The Panasonic Lumix GF5 houses 12.1MP Live MOS sensor which is the same as its predecessor - the GF3 - with a contrast-detect AF system. Its ISO rating goes from ISO 160 all the way to ISO 6400 with ISO 12800 in the extended mode apart from the Auto and Intelligent ISO settings. The rear 3-inch screen is a 920K dot LCD screen which is touch sensitive. It can shoot up to 4 images in the burst mode with single-point AF. There are 6 photo styles, 23 scene modes and 14 creative filters to choose from to give you a variety of shooting styles. You can even use some of these modes for video shooting. Also every shooting mode provides further tweaks on the touchscreen on the right hand side. There is a dedicated button for video shooting. One disappointing thing about the camera is the lack of hot shoe, so you cannot add any accessory or external flash. The pop-up flash unit is flexible and can be used to bounce off flash. The GF5 also has a stereo microphone. It can shoot full HD videos as well.

User Interface
The user interface is similar to the one seen on its predecessor - the Lumix GF3. Navigation is combination of touchscreen and physical buttons and navigation wheel. As we already mentioned above, the GF5 lacks a dedicate mode dial, so the quickest way to get into mode selection is to click on the top left hand corner which displays the current camera mode.

Apart from the regular PASM modes, you also have two Intelligent modes, an SCN mode and a creative filters mode. It is much quicker to just touch the mode you want to get into as the navigation wheel response for mode selection isn’t that great.

A quick menu button located just below the navigation wheel brings up the most frequently used options such as motion picture mode, still picture setting, image quality, focus mode, ISO and photo style. You can add four more most commonly used functions. We liked this flexibility to add more modes and really speeds up your camera usage.

The Display button as the name implies shows you the current camera settings that you have selected. You can disable this view if you find it too distracting by just pressing the Display button.

On the right hand side of the screen you have a pull out tab which has more quick functions. You get the touch zoom function which allows you to speed up or slow down the zoom. You can customise these Fn2 and Fn3 soft keys as well.

For more in-depth settings you will have to enter the Menu which provides you with more tweaks that you may want to implement.

Performance
The base ISO performance is quite good and there weren’t any artifacts to speak of at ISO 160. The GF5 performs noiselessly till ISO 800. At ISO 1600 noise starts to creep it and is noticeable at 100 per cent crops, but the images are quite usable. Also it being luminance noise, it appears as fine grain rather than botches of coloured pixels. ISO 3200 onwards, things get quite bad and one can see image noise which worsens at ISO 6400.

The GF5’s autofocus speeds are quite impressive during daylight. Focus lock is generally acquired under a second. Even while shooting at sunset, the AF speed was good. It only took a hit when shooting at night, where it tended to hunt for focus. Manual focussing comes with its set of issues as already discussed above. The GF5 is great for shooting street photography with the speedy AF.

The pop-up flash unit on the camera is flexible enough to be used for bouncing off light. It offers forced flash and slow sync with the red-eye off modes as well. We liked the slow synch flash as it retains much more background details than the forced flash. The images below were taken from about 3 feet. For portraits, we did not notice any red eye, even with the forced flash which is great.

The i-Dynamic mode is quite impressive and it is able to extract more details from the highlights and shadows when it is on as compared to when it is off. As you can see below the image on the left has lost out some detail in the shadows formed by the vertical beams, but the image on the right which has the Intelligent D mode set to high is able to light that portion well.

Indoor videos are very noisy and we did come across some banding as well while zooming in and out. The irritating part is the constant whirring sound when you have the continuous AF (AFC) mode selected as the lens motor is trying to focus. In the manual mode the whirring sound is only heard during zooming in and out. Video quality indoors was quite patchy. While this may not be an issue outdoor which has surrounding noise to drown out the whirring, but while shooting indoors it is quite a bother.

Shooting outdoors is comparatively better, but you see framing when you pan the camera. The stereo-microphone on the camera is quite good. Notice the sound of the knife sharpening amidst the chaos in the video below shot at a fruit market. It’s great for shooting amateur videos outdoors and you shouldn’t expect anything more.

The DMC-GF5 performed decently well under low light situations. Focus-hunting was quite prominent under low light situations. There are quite a lot of modes for low light and hand held shooting in the scene guide. If you are working with slow shutter speeds (in seconds) then the camera will take as much time to completely process the image. So for instance if you are taking a photograph with a 60 sec exposure, then the camera will take 60 more seconds to process the image. Seen below the image shot at ISO 1600 with the starlight effect on, the noise control is quite impressive.

Verdict
The Panasonic Lumix GF5 is an ideal mirrorless camera for someone wanting to upgrade from a point and shoot, but does not want the heft of a DSLR. Two intelligent auto modes, 14 creative filters, 23 SCN modes ensure that this is meant for the amateur user. Image quality is very good. Placement of the power zoom and manual focussing dials will take some getting used to. Video quality is average at best. Makes for a great first mirrorless camera purchase, but at Rs. 49,990, it is still priced on the higher side as it is competing with the Olympus E-P3 which is a good ILC as well.