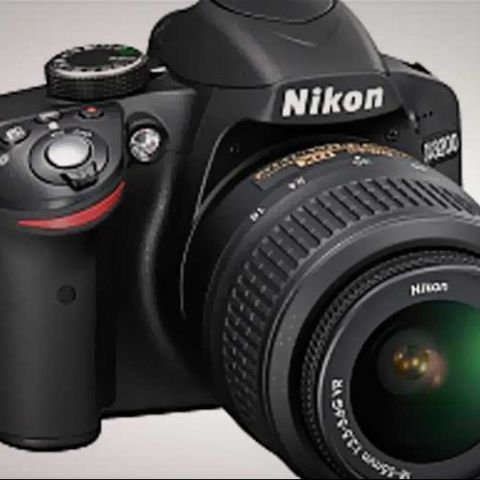 If you are someone eager to get your hands dirty with photography, but cannot afford to spend a lot, the D3200 is a great starter camera. The AF-S 18-55mm VR lens is not all that bad either in good lighting, but at the end of the day, you get what you pay for.

After almost two years of being the entry-level photographer’s friend, Nikon has replaced the D3100 with the updated D3200. Of all the updates the new camera brings with it, the most notable would definitely be the new 24 megapixel sensor. When the D3200 was announced, many assumed that the sensor at the heart of the camera was the same found in Sony’s Alpha 77 (the first APS-C camera with a 24 megapixel camera), but it turns out, Nikon has placed its own sensor in the D3200.

However, the sensor isn’t the only aspect about the camera to receive an update. Several smaller, but important aspects of the camera have been greatly improved on to make the Nikon D3200 a camera that can stand on its own in the entry-level segment.

Build and Ergonomics
For a reason that effectively continues to elude us, we can’t fathom why entry-level cameras are so tiny! The Canon SX40 HS is as big (in fact, thicker by 2mm) as the Nikon D3200, and it’s only a super zoom camera. We often hope that something about the look and feel would distinguish a DSLR from a point and shoot, but oh well. The D3200 didn’t fit well into our hands at all, but that’s not because it has bad ergonomics, but because it’s just too small to fit into normally-sized hands. However, placing the camera in smaller hands led us to believe that the ergonomics of the camera are indeed quite comfortable. This is definitely going to be a pain to shoot with if you have medium to large (to ginormous) hands, but if your forelimbs fall in the category of “tiny”, then you will totally be at ease with the D3200.

There aren’t a whole lot of buttons on this little puppy (which is a good thing because, well, we wonder where would Nikon fit them). There’s the usual slew of buttons that allow you access to menus, playback, navigation and magnification placed quite neatly on the back (again, the placement is more fitting for someone with small hands). There is also a dedicated live-view button, which we quite liked. The “start-stop” button for video recording remains a dedicated button on the top of the camera, next to the shutter release.

The D3200 is constructed out of high-grade polycarbonate, giving it a tough, but light build. However, a lack of weather sealing, even on the battery door and shutter button, is definitely a letdown for the dirt-laden and humid conditions available in India. While expecting professional grade weather sealing on a basic entry-level camera is nothing short of ludicrous, we did hope that manufacturers would at least introduce some level of weather protection on these cameras.

Features
The most notable feature of the D3200 is its gargantuan 24 megapixel sensor, which is the second highest pixel count in a DSLR after the D800. There was a time when Canon had the reputation of being the “pixel-count-chaser”, but it looks like the trend has basically switched completely. The sensor for the D3200 was apparently developed in-house by Nikon and not sourced from Sony (as assumed due to the two companies’ previous relationship).

To take care of the quality issues that might crop up from packing so many pixels into a small area, Nikon has supplemented the sensor with the EXPEED 3 image processor (the same is found in the D4 and D800). The EXPEED 3 chip helps with faster processing of the large files that the sensor generates (especially if you’re shooting RAW). It also helps keep the noise in check along with helping the D3200 reach a shooting speed of 4 frames per second. The frame rate is modest for an entry level DSLR, but we noticed that the burst speed slowed down after a while; leading us to believe that the camera buffer was not able to keep up with the shooting speed (we were using a Sandisk Class 10 8GB SD card).

The Nikon D3200 offers a pretty standard array of connectivity options. It comes with a proprietary USB port which doubles up as an A/V out port as well. There’s the usual mini HDMI port, along with a port to attach the optional GPS module. The D3200 also comes with a standalone mic jack, for those wanting to use external microphones for video recording.

Focus System
The D3200 features the same focus system as the D3100, the classic 11-point AF. We used several different lenses on the D3200 (18-55mm kit lens, 24mm f/1.4, 105mm f/2.8 macro and 24-70mm f/2.8) to see if the AF got better with better lenses. Before we discuss the nature of the results, we want to say that the 18-55mm lens we got with the camera was the newer one, with Nikon’s Vibration Reduction and Silent Wave Motor technology. We found that in general, focussing was on the slower side (when compared to higher grade DSLRs). During the daytime, the D3200 had no problems locking focus on subjects with enough contrast. We found that the D3200 was able to acquire focus a lot better with lenses like the 24-70mm than the kit lens provided.

Shooting in low light is a whole different ball game altogether. We cruised over to a local venue for an acoustic performance, figuring that the terrible club lighting would be the perfect place to test the effectiveness of the D3200 focus system. For us, the peripheral focus points were pretty much useless, as the lens kept hunting to acquire focus (with the kit lens and the pro-grade trinity). Even the legendary 24mm f/1.4 had trouble in low light, when open all the way to f/1.4. If you’re looking for a camera to shoot concerts, you might want to consider a higher grade body.

Image Quality
There’s a lot of expectations from the D3200 when it comes to image performance. There is a common notion that packing more pixels into a small area becomes counter-productive after a point and the D3200 is packing all 24 million on them on an APS-C sized sensor. One would think that the noise performance and per-pixel quality of the images would actually be a lot lesser than a camera that packs in fewer pixels, but in our experience, this wasn’t the case.

The Expeed 3 image processing chip does a wonderful job at drawing the most out the 24-megapixel mammoths. We shot with the D3200 in situations where we’d prefer to use our pro-bodies, and we were quite surprised with the results. The 24 megapixel sensor not only resolves excellent level of detail in every image, but also manages to keep the noise levels significant low. The Luminance noise looks like fine film grain, a very signature Nikon characteristic, while the chrominance noise only starts to creep in at around ISO 6400.

The metering, for the most part, was always spot on (maybe a variation of about a third of a stop at most). We did notice that even though the exposure was bang on for the most part, we found that shooting indoors (or outdoors under streetlights) rendered a warmer-than-usual tone to our images, which is an easy fix if you’re shooting RAW. It was a pleasant surprise to see just how versatile the RAW files from the D3200 are, allowing for recovery of detail in the range of 2-3 stops. Recovery of shadow areas also works amazingly well (we tweaked some of the files in Lightroom v4.1).

The flash on the D3200 is somewhat of a mixed bag. When shooting subjects that are close up, it tends to wash out the subject, but increase the distance to about 7 feet, and you get a beautifully well-lit image. We recommend caution while using the flash for the same reason.

All this RAW goodness does come at a price though, as each 24-megapixel RAW file will eat up roughly 20-25MB of disk space, which is all good when you’re the occasional shooter, but if you’re anything like us trigger-happy folk, then you’ll be chewing through hard disk space faster than you can say “what the!”

Video
It was great of Nikon to introduce full HD video recording in the D3100, however, there was a disappointing lack of choice of frame rates with full HD being limited to 24fps and 720p HD being limited to 30, 25 and 24fps. With the D3200, Nikon one-ups the previous video capabilities and introduces frame rates of 30, 25 and 24 to full HD recording and 60 and 50 fps to the 720p option. The D3200 can also record footage at a capacity-conscious 640x424 pixels as well.

As one would expect from a DSLR, the D3200 is a great video performer, provided the lens being used is of equally good quality. The kit lens was a little disappointing in this regard, but shooting footage with the 24-70 and the 105mm f/2.8 macro lens was a treat. If you’re an amateur filmmaker on a budget, we would not hesitate to recommend buying the D3200 to save money on the body and splurge on high quality lenses instead. Do watch out for low lighting conditions though, as the sensor will pick up chrominance noise very quickly in low light scenes.

Verdict
There is no denying that Nikon has significantly raised the stakes in the megapixel race. While many would consider that the case with respect to the D800, the Nikon D3200’s 24-megapixel mega-slab-of-silicon isn’t short on performance either. As far as image quality goes, we can find very little wrong with tiny fella. The only department where performance was below expectations was with the focussing in low light, something Nikon is known to have garnered as a niche for itself.

If you are someone eager to get your hands dirty with photography, but cannot afford to spend a lot, the D3200 is a great starter camera. The AF-S 18-55mm VR lens is not all that bad either in good lighting, but at the end of the day, you get what you pay for.