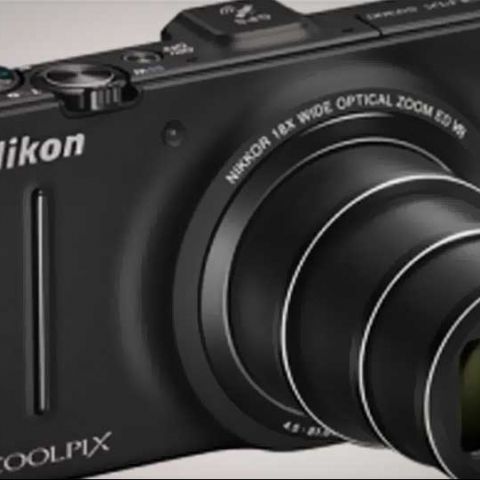 The Nikon Coolpix S9300 is definite performer. Its 18x optical zoom coupled up with the lens based vibration reduction system allow for great hand-held shots (provided there is enough light). The build quality is superb and for those who like bells and whistles, there's even a GPS chip. Although for a camera that costs 19K, the image quality leaves us a tad disappointed.

Point and Shoot cameras are not what they used to be anymore. I remember my first digital camera. It was a Canon Powershot A520 with a 4megapixel resolution and a measly 4x optical zoom. Back then, it was considered ‘top of the line’ and cost almost thrice as much as I’d have liked to pay for it. But digital imaging has come a LONG way since then (almost like the tech has travelled in a spaceship powered by Hyper-drive) and the sort of numbers we see in specifications are just mind-boggling.

One such category is the relatively nascent ‘travel-zoom’, which essentially packs a gargantuan optical zoom lens into a pocket-fitting form factor. Sometimes, we pick up one of these slim cameras and zoom in as far as the lens would go and ask ourselves “what kind of sorcery is this!” but in reality, its all just beautiful science. Nikon has recently launched the Coolpix S9300, their top-end travel zoom camera. With the market seeing a slew of such cameras coming in, we put the S9300 to the test and see if it lives up to Nikon’s reputation.

Build Quality:
The Nikon S9300 uses high-grade plastic as its build material, something that we are generally not in favor of. However, the S9300 does not feel cheap at all. In fact, the finish is rather deceptive, making us think (just for a moment though) that it was actually made of metal. The slight weight may also have had something to do with that. There is the off chance that the great build might fool a few into using the camera a little carelessly, treating it to an occasional drop or so, which the camera body might not survive. So we recommend caution.

The power button on the top panel is slightly recessed into the body, and therefore might require a slightly harder push, which we are more than happy to comply with. Why you ask? Well, you kind of don’t want this puppy “accidentally” turning on while its in your pocket now do you? The lens protrudes about 1.5 inches when the camera is turned out and pit that against a tight jeans pocket and you’ve got a pretty decent recipe for a technological disaster. The battery and SD card sit in a tight spot at the bottom of the camera that is covered by a rather sturdy piece of plastic flap with spring action. The cover on the mini HDMI and USB port is also pretty well designed, seamlessly blending into the body.

Ergonomics:
The Coolpix 9300 measures 2.5 inches in length and a hefty 4.3 inches in length; yet, the camera can be very comfortably used by just one hand. There is a nice rubber strip placed diagonally on the top right corner that acts as a rather comfortable resting point for the thumb. The spacing of the buttons is also well thought out, making the switching of various functions a one-handed function. The only annoyance was the pop-up flash, which has been moved from its traditional center-of-the-camera spot to the left edge. It’s only a problem if, like us, you hold the camera with two hands when trying to keep it extra steady. The press of the shutter button forces the flash to pop-up, but due our fingers bearing down on it, you can hear the little gears and cogs inside scrunching up in agony. We’re just glad we haven’t broken the mechanism. Yet.

Performance:
We were first impressed by the fact that the time between turning on the camera and our first shot was less than 2 seconds. This, of course was only valid as long as we were shooting without flash. The flash itself takes about 3 seconds to charge up. Speaking of flash, we should mention here that the flash tends to render the photos a tad warmer than we’d like, but it does have a rather even spread.

Warm images aren’t so bad, especially when the purpose is just to create a digital archive of family moments. What’s bad are images that are soft or have purple fringing in high contrast areas. The 18x optical zoom lens, sadly, tends to soften out as you progress from the center towards the edges. We also noticed purple fringing, in amounts that made us visibly uncomfortable. Regardless of the fringing, the colors from the camera are well saturated, even under the bright mid-day sun. The vibration reduction works rather well in stabilizing the enormous 18x optical zoom.

A key aspect to consider when picking up a travel-zoom is the effectiveness of the focusing system. Most cameras tend to struggle with focusing as you zoom in more, so it was imperative to test how the S9300’s focus would perform under tough conditions. We let the focus stay on Auto Area for this one. First, we shot a wide of a park on a particularly windy day. We then proceeded to zoom in all the way onto a small flower that was in the middle of our shot to see whether the camera would lock focus. Surprisingly, the S9300 locked focus almost immediately, albeit on the leaves that were in front of the flower we were trying to focus on. However, given the windy conditions, had the leaves not been there, we’re very sure the camera would have not had any problems getting the flower on focus.

It was rather unfortunate for us to note that the camera lacks all manual control. Instead, the mode dial is littered with various shooting modes (Scene, Continuous, Effects, Scene Auto Selector, Night Landscape, Backlighting and Smart Portrait). If you’re the sort of person who’d rather not have to deal with settings and numbers, then the S9300 is ideal for you. The various modes on the dial work as advertised by their names, especially the auto scene selector. We’re still a little short on luck when it comes to the Backlighting mode, but all in all, the image quality is rather good from all the modes.

Despite the lack of manual controls, the S9300 does allow you to choose the ISO setting, which, in our opinion is a definite bonus for lighting conditions where you know you’re going to need higher ISO. The 16megapixel back-illuminated sensor does a fairly decent job of capturing images (and rendering detail) even in fairly low light, but once the ISO level starts hitting the 800 mark, things change. At ISO 800 and above, the camera’s noise reduction algorithms become quite aggressive, suppressing noise rather successfully, but at the cost of image detail. Sadly, there is no option to turn off the noise reduction.

The Coolpix S9300 offers Full HD recording that can be initiated using the dedicated recording button at the back. Resolutions supported are 1080p, 720p, 960x540, 640x480 @30 fps, 640x480 @ 120 fps and 1280x720 @ 60 fps. When shooting in full HD, the video quality as you’d expect from an HD source. However, this only applies when the video is shot in adequate daylight. Once the light levels are low, the video quality dips significantly, with both luminance and chrominance noise becoming very apparent. When shooting at 640x480 at 120 fps, the camera doesn’t record any sound, but that’s to be expected. Great it you’re trying to make slow-motion-exploding-balloons footage, but terrible for filming any family gatherings.

Last but not the least, the on board GPS chip was quite effective in locking a signal, but only when outside, under clear skies. We’re of the opinion that the geo-tagging feature is more of a gimmick rather than an essential quality that contributes to the overall nature of the image. However, for those who love the extra knick-knacks, the S9300’s GPS chip can be a hit-or-miss deal, or at least it was for us, so we just turned it off.

Verdict:
The Nikon Coolpix S9300 is a great all round performer. The back-illuminated sensor does a fairly decent job of keeping the noise levels low, but at the cost of detail. It is unfortunate that there is no option to turn in-camera noise reduction off as it is what causes the details to be lost.

The 18X optical zoom works just like you’d expect from a camera that costs close to Rs 19,000. The zooming is smooth and comfortably slow to ensure that you don’t go from 1X to 18X zoom in less than a second. The lens shift vibration reduction works wonderfully allowing hand held shots to be taken at shutter speeds as slow as 1/20th of a second.

The hefty price tag on the camera is definitely justified due to the solid construction and the added GPS chip. There’s even an electronic compass tossed into the mix. All in all, we can definitely say that the S9300 would make a good companion on your next trip.