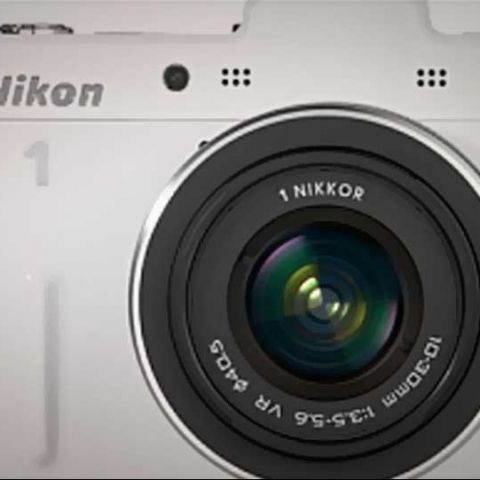 Nikon has finally arrived to the mirrorless camera party with its Nikon V1 and J1. Though a tad bit late, one could say Nikon was taking the time to not only develop their own proprietary sensor, but also come up with a hybrid contrast-phase-detect focusing system. However, it seems like they may have overlooked a few key aspects of what a mirrorless camera should be like. Pricing is definitely steep on this one, especially given the lack of some basic features like the lack of access to manual mode through the mode dial on the back. We just can't seem to gather the heart to shell out Rs. 45,450 for a camera that should be in the "DSLR-replacement" camp, but seems to fit better in the "point-and-shoot" segment.

With Olympus, Sony and Panasonic gunning to dominate the nascent mirrorless camera segment, many wondered whether the big wigs (A.K.A Canon and Nikon) would ever venture into the new territory. While Canon has remained mum on the topic, Nikon has come forth and announced the availability of two mirrorless cameras, the Nikon V1 and J1 as part of the Nikon 1 system. According to Nikon, their mirrorless cameras are infused with some never-before-seen tech like the hybrid focus system that utilizes both contrast and phase detection to acquire and lock focus, doing so at blazing fast speeds. Nikon has also blessed their mirrorless cameras with the ability to shoot stills at 60 frames per second, a feature that NO CAMERA, point and shoot or DSLR, currently has. There is a lot of excitement around the Nikon 1 system, especially the V1, which Nikon claims as the superior of the two. We get our eager hands on the big boy and put Nikon’s claims to the test.

Build and Design
The Nikon V1 employs magnesium-alloy as the choice of contraction material, lending it a very solid feel. The camera feels sturdy to hold, yet doesn't feel overtly heavy. The base of the camera is made of high-grade plastic that does not feel flimsy in the slightest. 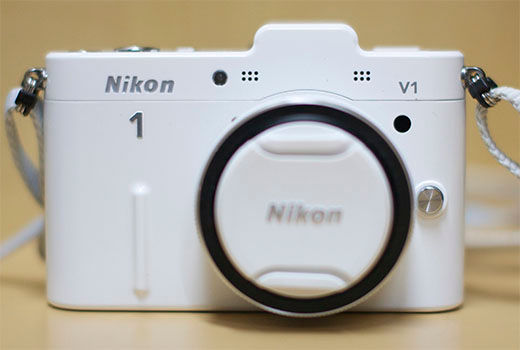 Nikon has made a couple of calls on the design front that, in our opinion, are rather questionable. For one, the PASM modes are eliminated from the rear dial and moved into the rather cluttered menu. The inability to switch between these modes quickly could be seen as a lost moment that needed to be captured. The other design quirk is the "proprietary" port that replaces what should have been an on-board flash. To add to our woes, the proprietary port is not compatible with any of the existing hot-shoe flashes that are made by Nikon, meaning you're going to have to shell out extra money for the ability to shoot in questionable lighting conditions. 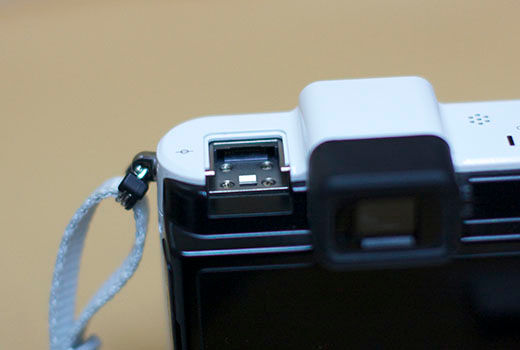 The lack of a manual focusing ring on the Nikon 1 lenses (all four) is a pretty huge design flaw, in our opinion, as it takes away from the DSLR-like feel and puts the Nikon V1 in the point-and-shoot league. The standard hot-shoe gets swapped out for a proprietary port on the side of the viewfinder that can accommodate either a flash (designed specifically for the V1) or an external mic for audio.

Features
The Nikon V1 is decently packed with rather pleasing features. One of the first things you'd notice about the V1 is the gorgeous and generously sized screen at the back, sporting a 921K dot LCD. The V1 also has an electronic viewfinder with a 1440K dot LCD screen that displays all relevant information while shooting. A sensor placed on the left of the eye-cup switches from LCD to viewfinder and back as the camera is raised to eye level or put down. The viewfinder is a great addition as it lends itself to the "traditional shooting experience" quite heavily.

The second impressive addition to the specs of the V1 is the hybrid focusing system that employs both phase and contrast detection methods to acquire and lock focus. The 135 focusing points (in single-point mode) are the most as of yet in any mirrorless camera so far. The focus points are spread decently across the screen so that subjects that may happen to be on the edge of the frame can also be captured with amazing clarity. A first of its kind, the dual shutter allows the camera to attain the ridiculous shooting speed of 60 frames per second. This can be done by switching to the electronic shutter (Hi) using a dedicated button on the rear of the camera. However, switching to this shutter locks the camera into 'automatic' mode and does not even permit the changing of the ISO. Also, when you shoot that fast, the camera locks the focus and the exposure settings according to the first frame. The icing on the cake (or rather the lack of) is the fact that when the fps is set to 60, the camera could only shoot 30 frames, due to a buffer limitation. Then there is of course the painful wait for the images to be written to the card. The thought behind the fast frame rate is appreciated, but the implementation of it seems, crippled, at best. 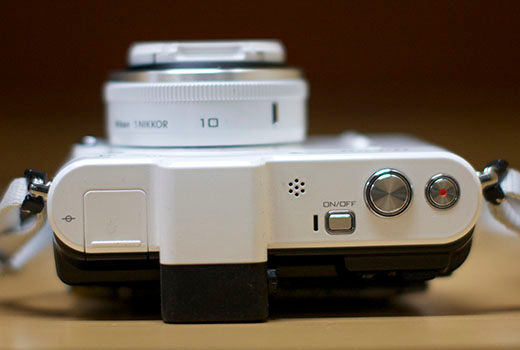 Another first-of-its-kind addition to the V1 is the "Motion Snapshot" mode which shoots a small video followed by a still. The two are put together in-camera and the playback of the file has the video play in slow-motion followed by the still image. The idea behind the mode is to 'create a strong emotional response,' but it's more of a gimmick than anything else.

Performance
We received a 10mm f/2.8 prime lens bundled with our Nikon V1 that allowed us to not only images with a shallow depth of field, but also venture into the low light territory. As it is to be expected, the image quality during the day time (well lit) was quite good, with a pleasing level of saturation and contrast. The 10-megapixel sensor did a pretty decent job at capturing details in both the highlight and shadow areas of the scene.

The low-light performance of the V1 was surprisingly good given the small sensor. The Nikon V1 goes up to ISO 3200 (native, expandable to 6400) in either the automatic configuration or by manual selection. We shot a scene under low light (room lit by just one incandescent bulb) to see how the sensor would handle the noise at higher ISO. We manually selected the ISO (from 200-6400) while keeping all things constant (the scene, light, camera position etc). As expected, ISOs 200-800 looked very clean, but what we observed at ISO 1600 and 3200 was rather surprising. It seems that Nikon has managed to squeeze micro four-thirds like performance out of a significantly smaller imaging sensor. The highlights retain their saturation and show no signs of chrominance noise. The midtones did exhibit some luminance noise, but it looked more like fine film grain rather than unpleasing smudges. The shadow areas in the ISO 3200 image did show some strong noise, but the overall image quality was surprisingly good. ISO 6400, as to be expected from extended ISO, was grainy with both luminance and chrominance noise, in shadows as well as the highlights. You can check out the photo samples of ISOs 200,400,800, 1600, 3200 and 6400 below.

All of this, of course works best when you are exercising full manual control over the shutter speed, the aperture and the ISO. The automatic mode had a tendency to choose an aperture which often resulted in significantly slow shutter-speeds that led to camera shake in may situations. Like we pointed out earlier, switching modes is a little annoying on the V1 as the options are removed from the mode dial and tossed into the menu.

Nikon touts the V1 extreme burst modes of 30 and 60 frames per second, claiming it as a feature one would not see in current cameras. While that may be true, our testing has revealed some serious flaws in the implementation of this otherwise insane feature. For one, switching the shutter to Electronic (Hi) locks the camera into full automatic mode. We could not switch to aperture priority or shutter priority or manual. We couldn’t even switch the ISO. We could live with shooting in automatic, but what really got us bothered was the fact that once we pressed the shutter button to unleash the 60 fps beast, the focus and exposure settings all get locked with respect to the first frame. What this means is that if your subject is moving (like shooting a fast runner or a moving car, or a hyper-active child), the first few frames might be in focus, but chances are, the rest wont. The images would be even more unusable if the lighting conditions are changing (for example in a club). Great feature on paper, but a rather poor implementation.

One thing we do have to hand to Nikon is that they absolutely nailed the focusing system on the V1. The hybrid contras-phase-detection system works without a hiccup and in our testing, we didn’t encounter a single time when the camera failed to focus on the intended subject (we made sure to respect the minimum focusing distance of our lens). There is a green focus-assist lamp that comes into play when the light levels are below optimum, but even then, the focusing speed is quite snappy. Having a whopping 135 focus points (most focus points in the category) definitely helps nailing the focus.

As far as video goes, there isn’t much one can do to improve on what’s already full HD resolution. The video quality is clear with sharp and detailed images. The slow motion mode records footage in 640x480 at 400 frames per second is quite exciting. The average bit-rate is 1.8mbps, so the quality isn’t that great, but it can still be used to capture some captivating footage, like water droplets bouncing off a hot surface.

Verdict
The Nikon V1, thought packed with some very impressive features, left us wanting more in almost every regard. A fast burst mode, but without the ability to auto-focus while shooting. An interchangeable lens system, but lacking in a manual focus ring.

A class that is looked upon as a DSLR replacement, the V1 mirrorless camera by Nikon seems to belong more in the point-and-shoot category. It’s difficult to discern which kind of consumer Nikon was aiming at reeling in with the V1. With the manual functions being buried deep within a rather congested menu system, the pros are most likely to overlook this camera. The lack of an on board flash severely limits the usage of the camera to situations with adequate light (unless you are willing to spend on an external flash unit) possibly leaving even the serious amateur a little jaded. At Rs.45,450, the novice photographer is better off with cheaper options like the Panasonic GF3.

No doubt the image quality from the V1 lives up to Nikon’s reputation, but poor implementation of what seem like great features along with the difficulty in accessing manual controls makes the V1 more of a glorified point-and-shoot.