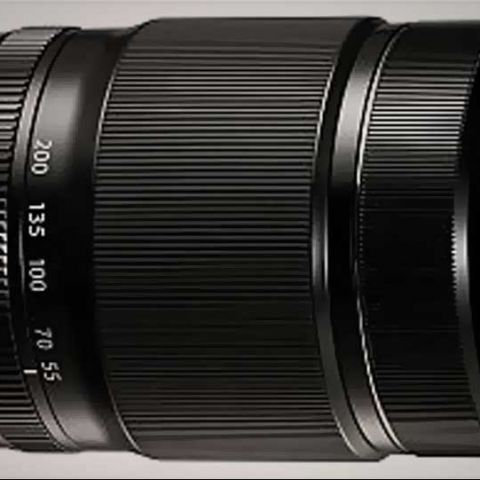 Built like a pro-grade lens and shoots like an L-series lens, its price is actually quite a steal. Fujifilm maintains that their X-series was a premium segment, so a premium pricing that falls in line with the rest of their lineup is expected. What we love is that the premium price brings with it premium performance and premium build.

Fujifilm has already established itself as a formidable entity when it comes to mirrorless cameras. The X-Pro 1 and X-E1 are complimented by some of the best lenses we have seen in the entire mirrorless segment, but the only drawback (as some think) happens to be the lack of any zoom lenses. When Fujifilm introduced the X-E1, they also announced the 18-55mm f/2.8-4 kit lens, which was pretty damn nice by any standards, but a longer solution was still amiss.

Cut to June 6, when Fujifilm officially announced the Fujifilm Fujinon XF 55-200mm F3.5-4.8 R LM OIS, a walkaround telephoto lens for anyone who’s been craving the reach. On the APS-C sensor of an X-Pro 1 or an X-E1, the lens gives an effective field of view of 82.5-300m m (1.5x crop), which should be more than enough for the casual shooter or a wildlife enthusiast. With such huge expectations, the obvious question is whether the lens can deliver the kind of impeccable quality and performance we’ve come to expect from the X-Series?

Build & Design
You open the box and pick this lens up and the first thing you notice is just how heavy it is. No, not the kind of heavy you’d hate, but the kind of heavy that reassures you that this lens isn’t just another piece of cheap plastic. The Fujifilm Fujinon XF 55-200mm F3.5-4.8 R LM OIS lens is made from some exceptionally high-grade plastic, with the zoom ring being adorned by a nice rubbery finish. On the front, there is a focussing ring that’s made of metal and towards the lens mount sits an unmarked aperture ring. The lens comes with a deep cylindrical type hood and the front element takes a 62mm filter, which doesn’t rotate on focussing. 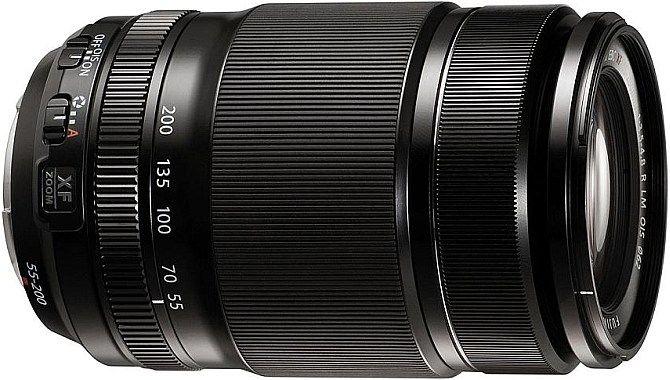 Quite frankly, using the Fujifilm Fujinon XF 55-200mm F3.5-4.8 R LM OIS lens has led us to believe that every manufacturer that makes a 55-200mm type of lens really needs to take a close look at Fujifilm’s telephoto. Despite being made of plastic, the lens is incredibly sturdy, showing no signs of corners being cut in production costs. If we had to draw a parallel, we’d liken the build quality on the Fujifilm 55-200 to the nicer Canon L lenses, or the premium Nikon zooms. This is the kind of quality we would like to see trickle into more mainstream kit lenses.

There is a slightly issue with the new lens when it’s mounted on the X-E1. Interestingly, the lens barrel of the Fujifilm Fujinon XF 55-200mm F3.5-4.8 R LM OIS tends to extend farther than the base of the camera. So, if you were to put it on a table, the combination would be resting on the lens, not the camera. This could be a potential problem if you’re trying to use a flat surface to stabilize your shots. It could even interfere with some tripod mounting plates.

Performance
Would it be enough if we just said that if you own an X-Pro 1 and X-E1, you should buy this lens? No? We didn’t think so. We spent quite a lot of time walking around with this lens and shooting a myriad of scenes at all sorts of focal lengths and apertures. Our testing did have a focus though. One, we looked at just how fast the lens would lock focus at various focal lengths, and, how easily it fell prey to vignette, purple fringing, and other lens issues. We tested this lens on an X-E1 with the latest firmware to ensure maximum performance.

As far as AF speed and accuracy go, we managed to get away with shooting in dimly lit rooms at focal lengths of up to 135mm at most. At 200mm, the light on the subject was too dim for the X-E1 to lock focus. The one thing that did remain impressive was the speed with which the Fujifilm Fujinon XF 55-200mm F3.5-4.8 R LM OIS lens was able to lock focus. We’ve yet to see a non-L series type lens be this quick. It’s not lightning fast, but it is still fast. In most occasions, the lens didn’t need to cycle through the entire focussing range to acquire focus, which was nice. What was nicer was the near silent operation of the Fujifilm Fujinon XF 55-200mm F3.5-4.8 R LM OIS, something that we see only in premium quality lenses.

Looking at the images from the lens, we have to say that we’re surprised at the kind of quality Fujifilm has infused into what is to be a kit lens. The Fujifilm Fujinon XF 55-200mm F3.5-4.8 R LM OIS lens is tack sharp throughout the focal range, even at the base aperture. We shot our wall of potted plants at 55mm and then zoomed in on one of the pots at 200mm to find that not only did the IS work beautifully, but the focus was incredibly fast, and accurate. The scene was lit by the mid-day sun, so the lens (and the hood) did an incredible job at keeping any flaring out of the picture. Looking at the image at full magnification, the leaves showed no visible purple fringing either, which is exceptionally good because most lenses in this focal length tend to fall pretty to purple fringing, especially at the telephoto end.

We also tested the Fujifilm Fujinon XF 55-200mm F3.5-4.8 R LM OIS lens while shooting from a moving car and found that the image stabilization did a pretty decent job of cancelling the effects of the bumpy ride. However, don’t expect that if you’re zoomed in all the way at 200mm. A lot of our shots involved putting the primary subject on the edge of the frame to see whether there was any trailing in edge sharpness, but we found that the lens maintained the corners exceptionally well. Many of our shots also involved white subjects shot against a harsh backdrop under strong light, the perfect recipe for a lens to develop purple or green fringing, but the Fujifilm Fujinon XF 55-200mm F3.5-4.8 R LM OIS keeps their levels to zero.

Summary
The Fujifilm Fujinon XF 55-200mm F3.5-4.8 R LM OIS lens will cost you Rs. 49,999, which happens to be at least twice as expensive when compared to the DSLR counterpart of the same focal length lens. However, when you consider the fact that the lens is built like a pro-grade lens and that it shoots like an L-series lens, you realize that the price is actually quite a steal. Fujifilm has always maintained that their X-series was a premium segment, so a premium pricing that falls in line with the rest of their lineup is expected. What we love is that the premium price brings with it premium performance and premium build.