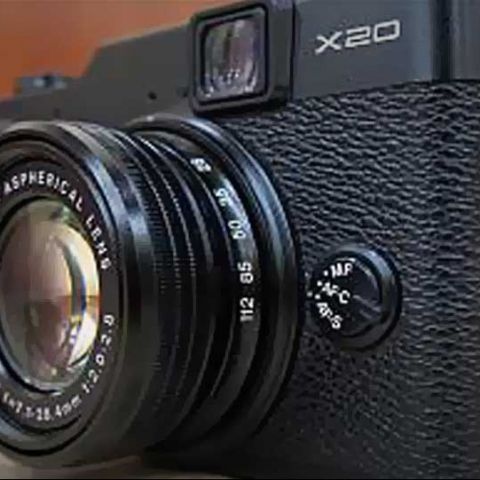 The X20 boasts to be a lot more than its predecessor claimed to be, packing a brand spankin' new BSI sensor and image processor. It addressed the many shortcomings the previous model had, including making that optical viewfinder useful by putting a digital information overlay in there. But does it seriously outperform its predecessor? But more importantly, does it justify spending the extra money over its competitors? We find out.

The Fujifilm X10 fumbled pretty hard when it was launched with its white orb issue and everything, and despite a few firmware updates, the problem persisted. Fujifilm finally isolated the issue to a problem with the sensor itself, offering free replacements to everyone who was experiencing the ‘Orb issue.’ Moving past that caveat, the X10 was a brilliant little camera, one we fell in love with almost instantly. The camera is aimed at the enthusiast who has a penchant for the retro.

At a Glance
The Fujifilm X20 brings all the important changes on the inside. For starters, there is a 12MP X-Trans CMOS II sensor paired with an EXRII Image Processor Chip. Essentially, the new sensor is significantly improved from the one in the X10 as the new silicon utilizes the Back-Side Illuminated design to improve low light performance. There are also a bunch of dedicated phase detection pixels baked into the sensor, making the X20 rather quick to lock focus in most conditions (more on this later). The EXRII chip has also undergone significant improvement, with the primary purpose (besides pushing the RAW data from the sensor to the memory card) of applying real-time lens correction data to all images. It also pushes the maximum burst mode to 12 frames per second.

Design
The box is incredibly well designed, as we’ve come to expect of any X-Series product. Upon opening the package, inside lay a camera that looked absolutely identical to the X10. That is a great start if you ask us, simply because the X10 was built of solid magnesium alloy. The X20 continues the tradition of being built like a tank and sticking to the ergonomic finesse of its predecessor. The only noticeable change between the X20 and the X10 (besides the obvious etching of the model number) happens to be a little “Q” button that has replaced the “RAW” button. This new “Q” button is straight off the X-Pro1 and X-E1 and gives quick access to every essential imaging feature such as Dynamic Range settings, white balance settings, colour settings etc.

As we had said in our review of the X10, the physical dial for controlling the exposure compensation is a great little thing and we absolutely love it. Given that we have a penchant to land ourselves in the worst shooting conditions possible, the dial comes in real handy to adjust exposure rather quickly. The standard hot-shoe for flashes is also great as it will allow you to plug in a Fujifilm flash, or, if you’re a creative nut like us here, slip on a PocketWizard radio for off-camera-flash-wizardry. It works, we checked and loved it.

Performance
Autofocus
One of the key areas where Fujifilm claims the X20 has been greatly improved is its autofocus performance. This Fuji says is courtesy the on-chip phase detection coupled up with the EXRII processor which has also improved (greatly we might add) the start-up time of the camera. The camera still offers the same three focusing modes (AF-Single, AF-continuous and Manual) along with the same 49 AF points whose size can be adjusted. We immediately got down to business, and put the X20 through an intense shooting cycle to see whether the AF was any good.

In regular daylight conditions, the AF was spot on almost every single time. The few times it failed to acquire focus was when we had reduced (or increased) the size of the AF point beyond normal parameters (for example, trying to focus on a person’s face from 10 feet away with the AF point at its biggest). This flexibility in being able to change the size of the AF points can therefore hold back the right kind of AF performance, so we recommend tweaking this settings as per shooting conditions.

When switching to low light shooting conditions, the AF performance did take a hit. For starters, we absolutely had to turn on the AF assist beam, which we don’t mind at all, but we know a few people who absolutely detest its use. When shooting in AF-S mode (the one where we can select any one of 49 AF points) we noticed that despite the AF assist beam, the camera would continue to hunt when any of the AF points in the outermost 2 rows were selected. We confirmed this weakness by reframing our shot so that the subject would lie on the centre AF point and sure enough, the camera locked on pretty quickly. We’re inclined to believe that this behaviour is due to the relatively small area the AF beam is able to spread across laterally, not being able to create enough contrast on the outer edges of the frame for the AF system to get a proper lock.

The third aspect of the AF module happens to be the Macro Mode. The macro mode on the X10 was quite good in of itself, leaving very little desire for improvement. The mode on the X20 is precisely just as good. Do note that the AF speed in macro mode is considerably slower than when using the regular AF mode, owing to the fact that the camera is performing a finer measurement of the focusing distance. Patience is key here.

Image Quality
The Fujifilm X20 is one versatile little piece of imaging technology. At the heart is an in-house developed X-Trans sensor which ditches the conventional Bayer Type pattern and instead places the RGB pixels randomly across the sensor surface. Each row of the X-Trans sensor also has all three colour pixels. What this has allowed Fujifilm to achieve is (1) the random nature of the pixels yields a grain much closer to that of film and (2) the random RGB pixels means the camera can ditch the Optical Low Pass Filter altogether and yield sharp images. The X20 delivers on both those accounts.

What the X-Trans sensor’s pixel arrangement also enables are various film simulation modes such a Provia, Velvia, Astia, and various Pro Neg and monochrome settings, which it can simulate rather well thanks to the highly randomized placement of the RGB pixels on the sensor. We found that not only do these film simulation modes work extremely well; the X20 can also be tweaked to generate images with a “customized” colour tone using the Q menu. The customizable nature of how much saturation, contrast and dynamic range the X20 can cover, coupled up with the fact that the Fujinon lens is crazy sharp and there is no Optical Low Pass filter, the X20 becomes a formidable camera that spits out some really good looking images, provided you have the skill to wield this tool.

In low light, the Fujifilm X20 manages to hold its own up to ISO 1600 without any issues, but once we started hitting the ISO 3200 mark, noise was rather quick to populate the shadow areas. Thankfully, a quick switch over from shooting colour to monochrome would mean you’ve got vintage looking photos on your hands, so in that sense, the noise isn’t so bad.

Video Quality
Unfortunately, the Fujifilm X20 suffers the same drawback with respect to video as every other X-Series camera – the lack of any manual controls. The video quality has improved only ever so slightly over the X10 and that can be attributed to the BSI sensor, but it isn’t a whole lot. The AF is a little slow and sometimes off target in low light situations, but that can be minimized by keeping the object of interest at the centre of the frame. We wouldn’t recommend going over ISO 1250 while shooting video, especially in low light. The shadow areas are very quick to deteriorate. Comparing the video quality to others in this segment like the Canon PowerShot G15 and the Sony DSC-RX100, we’d say that the X20 is definitely above the Canon, but doesn’t quite match up to the standards of the Sony RX100. Then there is the issue of the stereo microphones on the X20 not being ideal for recording sound when filming outdoors. If the wind picks up, you can kiss most voices goodbye as the microphones don’t do a very good job at cutting wind.

Conclusion
The Fujifilm X20 may not be much different from its predecessor in the first glance, but one quick look at the spec sheet and you know this camera has received some serious re-tuning on the inside. As far as imaging performance goes, the camera is at par with the Sony RX100, which boasts a bigger sensor. The X20 takes a few leaps ahead of the competition though, thanks to the fast f/2.0-2.8 lens which makes the camera a good companion in low light as well. The focussing is great, but the shaky performance of the outer two rows of AF points in low light is a slight damper on our spirits. Then there is the issue of average video quality at best, with a total lack of manual control. For a camera that costs more than the competition, we’d have expected it to at least match the essentials.

Regardless, the X20 comes free from any orb issue, significantly improved performance with respect to noise, autofocus and super short start-up times. It is only Rs. 5,000 more expensive than the Sony RX100 (which is an excellent camera in its own right), for which you get a much faster lens, guaranteed sharper images. The RX100 on the other hand offers a significantly bigger 1-inch sensor which has better colours and dynamic range than the 2/3 inch sensor of the X20, but the optics on the Sony can’t compete with those of the Fujifilm. All in all, the Fujifilm X20 is a really good camera and while it is more expensive than the competition, it doesn’t compromise in any way.