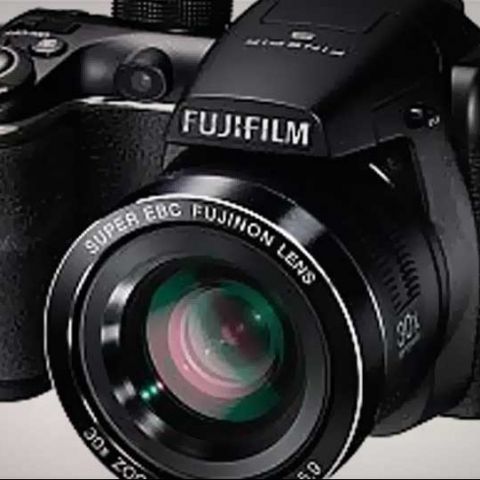 The Fujifilm FinePix S4500 is a superzoom camera with an impressive 24-720mm fiocal length, but features a slow lens (f/3.1-5.9). The camera fits well, handles well, but somehow, ends up feeling a little plastic. The use od CCD sensor makes us a little skeptical of the cameraï¿½s low light performance, but we love the landscape shots from this camera.

Fujifilm has made quite a name for itself in the recent past with its X-series of cameras.

We spent a considerable time with the Fujifilm FinePix S4500 and here is the breakdown of what we feel about this camera:

Build & Ergonomics
The Fujifilm FinePix S4500 is built of plastic with a rubberized layer on the back. The rubber grip is nice, but the plastic nature of the camera is quite apparent. The buttons on the back are packed pretty tight, which is nice in our opinion as you don’t have to hunt on either side of the camera for buttons, not do you have to move your finger a lot. We did, in our use, accidentally press the wrong button though, due to close proximity. So if you have big thumbs/fingers, the chances of hitting the wrong button are higher.

While the camera does feel a little plasticky, it does not feel flimsy. However, we did have a hard time getting used to the fact that the S4500 doesn’t come with a lens cap. The lens does retract when the camera is switched off, but given how much we throw things around on our desk, the chances of something metallic hitting the front element was pretty high. Not to mention the risk of carrying it around. If the camera accidentally gets switched on (for which, there is a slider and not a button, so it’s harder for the camera to accidentally come on), there is a good chance the lens element is going to hit something. In our books, the exposed lens cap is a major design flaw, putting your investment at risk.

Features
The Fujifilm FinePix S4500 houses a 14 megapixel CCD sensor measuring a standard 1/2.3 inches in size. Now with the advancement imaging technology has gone in the last decade, CCD sensors are pretty old. Long ago, Nikon was famous for using CCD sensors in their DSLRs due to their ability to give higher shutter speeds and sync speeds with flash. However, the downside was that they required massive amounts of power to drive them and they had a tendency to generate noise a lot quicker than their CMOS counterpart. These days, even CMOS sensors have evolved into Back-Side Illuminated CMOS sensors, giving even better noise performance. So Fujifilm’s decision to stick with a CCD sensor baffles us.

A plus for the S4500 is the electronic viewfinder, which has a decent resolution of 200,000 dots, which is more than enough for the small screen. The viewfinder is quite versatile in its functionality, capable of performing every task that the rear 3 inch 230K dot screen can. So if its bright day light, the viewfinder can be used for image playback or browsing through the menu.

Image Quality
The imaging arena is one where the FinePix S4500 leaves a lot to be desired. We’re used to seeing Fujifilm’s film filters in the cameras we’ve received so far (Velvia being our favorite), so it was a little disappointing to see that the S4500 doesn’t include those filters. The camera does take a while to start up, almost 3 seconds from pushing the on button to taking the first shot.

The camera pretty much locks up between shots for about 2 seconds till it is done writing to the card. Overlooking the nagging lock-ups, the images out of the Fujifilm S4500 seem to be quite decent for the price point. The greens especially look quite pleasing, so this is definitely a decent camera for landscape shots. The skin tones were pleasing, though a tad warm for our liking (but we like cooler colour tones, so there’s that).

The low light test of the Fujifilm S4500 didn’t fare so well. While the camera does ISO 1600 natively (6400 with boost), we started noticing colour noise even in ISO 800 shots, though it wasn’t so bad that the image would be considered a total loss. A little bit of noise reduction would definitely salvage the image, but we can’t say the same for the higher ISO numbers. The low light performance isn’t helped by the fact that the lens has a relatively slow aperture (f/3.1-5.9) and combined with the small front element, which is typical of any point and shoot, the amount of light hitting the sensor isn’t all that much and the stabilization only goes so far.

The video too is quite limited on the Fujifilm S4500, with the resolution capped to 1280x720 at 30 fps. In bright light, the video is just slightly above average, but the low light performance is just not good enough.

Verdict
The Fujifilm FinePix S4500 is priced at Rs. 17,999, making is a part of our medium tier point and shoot cameras. For the price point, the camera performance leaves a lot to be desired. But at the same time, we liked the markings on the lens which actually show not only the zoom factor you’re shooting at, but also the actual focal length. There is also built in neutral density filter, which allowed us to shoot at smaller apertures in bright day light, which is a major plus.