Canon SX30 IS - an ultra zoom for all seasons Review 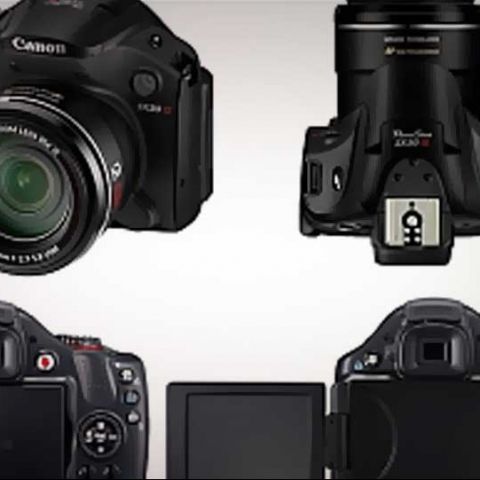 At an MRP of Rs. 28,995, the Canon SX30IS is the camera for you if you need a very wide zoom range to work with - versatility is the key here. Image quality is pretty good for a compact camera, but if you're really discerning about quality, you might be a bit disappointed, especially at ISO 400 and above. In such cases, we recommend an entry-level dSLR, or something like the Sony NEX-3 or Canon S95 if you're averse to bulkier bodies.

Canon SX30 IS - an ultra zoom for all seasons detailed review

Ultra zoom cameras are a most interesting niche. For one, this category is synonymous with very long zooms (obviously!) and (not so obviously) a lot more manual control than ultra compacts give you. Larger bodies mean they are a little closer to the reassuring grip of dSLR cameras, but are typically smaller, and lighter. Prices are also at par with entry level dSLR bodies with a kit lens, and therefore, there is a tradeoff - while a dSLR at a similar price range will give you better image quality, the kit lens are mostly mediocre, a fact that most would-be buyers do not take into consideration. Also, you cannot even dream of the zoom flexibility of an ultra zoom. And this is where the SX30IS earns its bread. The latest of a long line of Canon ultra zoom point and shoots, the SX30IS has a massive focal range of 24mm to 840mm, and this equates to an impressive 35x optical zoom.

If you've held a dSLR like the Nikon D300s, the SX30IS will feel like a toy. A very well built toy however, and it feels better put together than its predecessor the Canon SX20IS. Good quality plastics have been used and while the body isn't metal, it feels pretty solid in hand. Even the mode dial has a nice positive feel and works with a reassuring click. A slight indentation has been given for your thumb, but for most people, this grip will feel small, especially if you're used to dSLRs. For a point and shoot, the grip is pretty good, although the Panasonic FZ35 has a better grip. The entire camera is a matte black, and looks rather attractive with lettering in white and red. 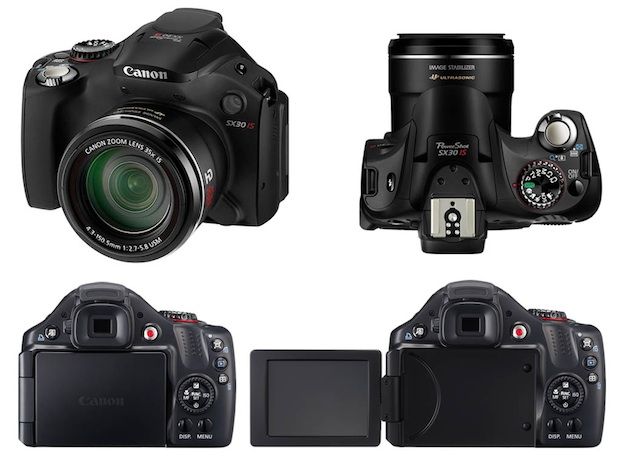 All the buttons are well laid out, and pretty large - making them easy to use. Button travel and feedback is inconsistent though. For example, the maximise image preview button has hard feedback but is usable, whereas the button immediately below it i.e. the play/preview button is set deep in the body and you really need to press to activate it. The rear dial has a smooth action, but its movement is precise, and for the most it works well. This dial is also a four-way button and this part too works well. Canon has gotten menus down to a fine art, and everything on the SX30IS is intuitive and menu options are well organised.

The zoom ring also works well, and is sensitive to force - push harder and you'll zoom quicker. The lens zooms quietly, unlike the SX20IS which was quite noisy, with a sound akin to grating. The 1050 mAh battery and SD card bay share an entrance. The outer barrel that houses the lens is made of metal, but isn't heavy, and the SX30IS feels nicely balanced. A mini USB and mini HDMI port are on the right side, under a hard rubber cover.

The 35x optical zoom would be this cameras standout feature. As expected, image stabilisation is also on the spec sheet, as is video recording, albeit up to a reduced resolution of 1280 x 720 pixels (720p). Consumer cameras tend to have a lot of preset shooting modes for newbies, and the SX30IS is no exception. Two custom modes and the usual gamut of auto, manual, scenery, sports and portrait are available, in addition to the widely used shutter and aperture priority modes. In the menu, additional shooting options are available. The aperture goes down to f2.7, which is pretty decent for a compact camera. There are also a number of white balance modes to cover shooting under various conditions, and the ISO range extends from ISO 80 to ISO 1600. While cameras like the Canon S95 support higher ISO modes, up to ISO 3200, we feel this is of limited use given the size of the sensor and large amounts of noise at these higher sensitivities.

The SX30IS allows you to change the focus zone and you have 15 options to select from. The flash can be toned down, but there are only three gradients, which we feel is a bit limited - five would be much nicer. Like most dSLRs, the SX30IS allows you to zoom while recording videos and take still photos, unfortunately this doesn't work perfectly, and when an image is taken, the shutter blocks video capture, so you get a second of darkness, followed by a momentary display of the image captured, before the video recording is resumed - this is a major drawback that needs resolving before the SX30IS can seriously be considered for video. While dSLRs record a single audio channel (mono), the SX30IS is capable of recording sound in stereo, which is nice. Unlike some cameras, where the flash insists on popping up in auto mode, the SX30IS' flash will not fire until it is raised - some much needed fine-grained control. RAW support is lacking - something enthusiasts and those who do a lot of touching up will not like, but we wonder even if it were present, would it make a huge difference for such a tiny, limited sensor (compared to full frames and 1.5/1.6x crops).

We've become used to Canon cameras and their somewhat neutral output with less highlighting and specular effects. The key phrase being "realistic" and not over-realistic, with saturated, concentrated and overrich looking colours. The SX30IS is no exception to the rule. The output from the SX30IS is quite good in good light. Images show good detail, and in particular finer details are reasonably well resolved (for a sensor of this size). At ISO 80 to ISO 125, the output is clean, without any hint of noise. If there is bright sunlight on the subject, bear in mind that highlight clipping will occur.

Contrast is a bit lacking in shots, but this is typically an issue with most small sensors - they lack a wide dynamic range. Taking a couple of macro photos highlights the capabilities of the sensor. While the SX30IS is very well detailed, one cannot help but comparing it on a per pixel basis (100 % crops) to earlier cameras with smaller sensors, and here, the SX30IS is found slightly lacking, for it lacks that final bit of crispness that a discerning photography enthusiast would desire, though to be honest it will suffice for most folk. Purple fringing is a problem with this camera, and it is clearly visible in some shots, especially towards the edges.

At ISOs above 200, quality quickly nosedives. In fact, at ISO 400, there is visible noise although it is more grain-like, and at ISO 800 this is clearly visible in 100 % crops, including those captured in sunlight. However, to be fair to this camera, this is not visible when viewing images at reduced sizes, or even full screen, the relatively high megapixel count is, therefore, both its saviour and its downfall. At ISO 1600 noise becomes visible at even 800 x 600 pixels, and besmirches the image in just about every way, although as far as point and shoots go, we've seen worse.

The flash unit is quite bright, and doesn't tone down for closer shots and portraits as well as we'd like. Which is a pity, given that a lot of your shooting with a point and shoot after dark, and indoors will involve using the flash. On its lowest setting, the flash outout is pretty feeble and barely illuminates a distance of 3 feet. On its highest setting, it's pretty powerful, easily illuminating a distance of up to 7 feet.

A quick word on the autofocus system. It is quite fast in good lighting, and the SX30IS will acheive lock on within half a second, which is slower than some dSLRs, but not by a lot. In less light too, the SX30IS is pretty quick, as long as there is some contrast in the scene to lock on to. Focus accuracy is good, and objects in focus are very sharp.

Video recording offers good to decent quality, except when shooting indoors, where there is flickering noticeable in some dim regions. Also clicking a photo pauses the video for a second, and this is not acceptable for a feature that has become almost de facto of cameras, and is expected to work flawlessly for a camera in this price group.

Coming to the image stabilisation system, one must really hand it to Canon. Even at the long end - a whopping 35x, there is no noticeable shake to images, and focus is crisp. Obviously if you try, you can defeat the IS system, but the fact is, for such a long zoom, the IS system does a darn good job, and the SX30IS can easily be recommended for those wanting/needing a long zoom. Battery life is also very good, with the SX30IS taking easily more than 300 shots with sporadic flash usage of around one in 15 shots.

At an MRP of Rs. 28,995, cheap the SX30IS is not. In fact, entry-level dSLRs with a kit lens are priced similarly. What you will not get with a dSLR is the flexibility of a 35x zoom and a usable IS system. The SX30IS also manages good image quality with very nice sharpness, but as usual, the limitations of cramming more photodiodes on a smaller space shows up, and we find some older cameras producing much sharper results on a per pixel basis. Then there is sensor noise, which is noticeable at ISO 400, becomes an issue at ISO 800, and ruins output at ISO 1600, spoiling the versatility quotient of this camera. if you want good quality in low-light, you will not find it here.

If you want an ultra zoom with good to decent image quality in most situations, the SX30IS is a good, albeit slightly expensive buy, and the killer IS system seals the deal. If you're a quality buff, who wants to work with 100 % crops, remember that you are restricted to sensitivities of ISO 200 and lower - cameras like the Canon S95 and the Sony NEX-3 will give you an edge as far as quality goes.

Canon SX30 IS - an ultra zoom for all seasons Key Specs, Price and Launch Date

Canon SX30 IS - an ultra zoom for all seasons

Canon SX30 IS - an ultra zoom for all seasons