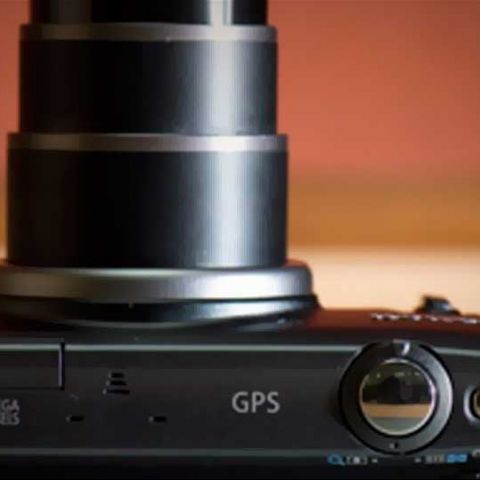 Every bit of the Canon SX260 HS is so beautiful, that we have a ridiculously hard time putting it down. The camera is extremely slim, sturdy (thanks to the metal frame) and the curved edges make it extremely comfortable in the hands. Performance wise, the camera managed to keep up with practically everything we threw at it. The price tag of Rs 22,995 seems a little steep, however the performance coupled up with the form factor of the camera justify the price.

When a company has unlocked a successful formula for their product, they seldom deviate from it. Canon’s history with camera making is a testament of that very fact. They have churned out great cameras in every segment and the travel zoom is no exception.

The SX260 HS is Canon’s top-end travel zoom camera that promises to be an excellent companion on every trip you make. Well, we’re not that easily convinced to we put this little hunk of gorgeous metal to the test.

Build and Ergonomics:
The first thing you notice about the SX260 HS is its svelte matte finish which lends it a brushed metal feel. The unit we received was slate grey with slight color variations being used for the buttons and text. The metal ring around the zoom lens is brushed metal and blends rather well into the body’s color scheme. On the front, there is a nice, smooth rubber slab that juts out of the body, serving as a means of enhancing the grip of your shooting hand on the camera.
The back of the camera features the standard jog dial that also functions as a controller for various options (flash exposure, exposure compensation, focus modes and delete). Interestingly, Canon has moved the mode dial from the top onto the back (in a move to slim down the camera as a whole). The buttons on the back feel like they’re made from the same material as the body itself and there is no wobbling or wiggling, giving them a very well finished look and feel. The mode dial is well constructed, with just enough resistance to not move in case you accidentally knock into it. We liked how it makes a clicking sound when it switches modes, as a confirmation that the dial is in the correct position.
The bottom of the camera is pretty straightforward with a battery flap that covers the battery and SD card slots, a standard 1/4” tripod mount. The battery door on the SX260 HS is quite something to talk of. IT’s nothing special in terms of the engineering, but the quality is excellent. It locks into place quite well, and requires more than average effort to open, effectively eliminating any accidental openings of the door.

The top of the camera just features a standard shutter button with the zoom mechanism on the right edge and the mechanical pop-up flash on the far left edge. Lately, most camera makers have been switching the position of the on camera flash to the far left (from the original center) and we’ve got some beef with it. We often noticed that every time the camera had to pop the flash up for a shot, our finger would obstruct it, causing an uncomfortable sound. OF course, this is a problem only for those who are used to holding their cameras with both hands (which is like 98% of the camera user population according to a survey we just made up for this review). However, as we used the SX260 HS more and more, we noticed how comfortable and ergonomic it was for one handed use. Besides, we don’t like using flash anyway, so we kept it turned off for the most part.

Performance:
Now onto the juicy bits! The Canon SX260 HS packs a modest 12.2 megapixel sensor, which in our opinion is a good decision, but more on that later. Canon also flaunts the “HS” nametag on this one, the technology simply being a combination of a back illuminated sensor along with a Digic processor (in this case, Digic 5). The “HS” system allegedly reduces noise up to 75% in high ISO conditions and we’re definitely going to be putting that to the test.
Operationally, the Canon SX260 HS is no different from any of the Canon cameras before it. The menus work the same way, the buttons do the same things. Canon has pretty much locked down on a very successful formula for the user experience.

We took the camera outdoors for a little spin to see how it would fair under the mid-day sun and well, we weren’t disappointed. First off, the camera went from switched off to ready to shoot in under 2 seconds. That’s BLAZING fast!

However, if the flash was required to get the shot, then the startup time increased to about 4 seconds as the flash does take some time to recharge.

We shot various scenes in various conditions (all on Program mode), starting with shooting a bright scene at the wide end of the lens. We then proceeded to zoom in all the way to 20x and shot the same scene, without moving the camera. We shot macro, walls, architecture and everything under the sun (literally!) and while the camera does well when shooting evenly lit scenes, we found the camera to struggle a bit with maintaining details in the shadows. We also found that the camera has a stronger tendency to expose for highlights over shadows, so if you’re shooting a scene with a large dynamic range, you might not be very thrilled with the exposure.

Heading over back to the studio for some controlled tests, we set the camera of Program mode just to see how it would work out the white balance. We shot our target scene at various ISOs to see how the HS system holds up. The ISO on the SX260 HS tops out at ISO 3200 which might seem low given how some cameras can go up to 6400 and 12800, but in our opinion, Canon has drawn the line at a very reasonable range. In our test shots, we got clean and crisp shots all the range. The noise is practically non-existent as is any signs of noise suppression. The center and edge sharpness is commendable, especially at higher ISOs. Even ISO 3200 left us quite impressed, with a total lack of noise, although there were some mild signs of noise suppression and loss in sharpness. Low light samples showed noise creeping in around ISO 1600, with a lowered dynamic range.

The video mode on the SX260 HS offers a slew of resolutions (and frame rates) you can record at, ranging from full 1080p to 640x480. The video mode can be accessed straight from the dedicated recording button at the back, without having to fiddle with the mode dial on the back. We found that the video quality on the camera is great, however, the focus seems to stumble a bit when you start zooming in while recording, a problem we didn’t experience any such problems with the Sony HX20V. The audio quality is clear, thanks to the stereo mics on the camera. Sadly, the video quality seemed to dip when shooting indoors in low light, with the shadow areas laden with noise. Our indoors environment lends acoustics an echo, and we noticed that the mics were not able to cancel out the echo, causing the audio to be of poor quality.

The camera also features a selection of creative filters such as fisheye, sepia, effects which are applied in camera. Personally, we’d stay clear of such effects, being quality Nazis, but if you like getting funky with your images without having to deal with the hassle of image editing software, then you might actually enjoy the feature.

Verdict:
In one word; AWESOME. We love the SX260 HS. The camera is built around Canon’s tried and tested formula of a very intuitive user interface and ergonomics, along with stellar image quality. Keeping the pixel count relatively low (12megapixels) along with a realistic ISO range allows the camera to deliver great image quality within its operational parameters.

The 20x zoom works well, the body is built solid and the battery lasts long enough to get you through a party or two. Our only gripe with the camera is its less than stellar video performance. Despite this one minor drawback, the Canon SX260 HS is worth every bit of that Rs. 22,995 you’re going to shell out for it. The built-in GPS chip adds value to the package, as does the bundled 4GB Class 4 SD card.