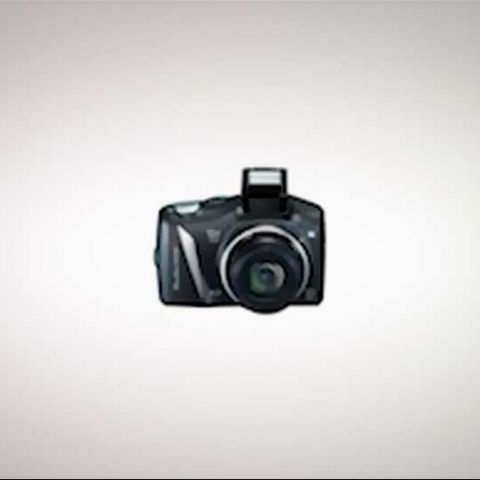 The PowerShot series of cameras have long since spearheaded Canon's popularity in the imaging segment. Canon has two lines of compact cameras – the IXUS series, designed for those looking for sleek cameras, and the PowerShot series, that feature slightly bulkier bodies but with added manual features and ergonomic contours. The SX130 IS, is a high zoom model with the usual gamut of manual controls, offering extra control on image parameters. Although not an ultra zoom model, the SX130 IS offers a 12x optical zoom, from 28mm to 336mm, a pretty useful focal range, and can qualify as a super-zoom model.

A press image. The SX130 IS is a good looking camera, the pop-up flash is particularly sleek

In-hand the SX130 IS, is a solid little thing. While it’s not ultra compact, it’s pretty sleek for a 12x optical zoom, and the lens hardly extends when docked. It will fit the jacket pocket, but isn't built for tight trousers. There is a fair bit of advertising of features happening on the front – the megapixel rating, optical zoom, HD movie recording are some of the features mentioned. However, the lettering is not too intrusive. To the left on the side, is a small concealed slot that holds the tiny battery that maintains the date, used when you wish to superimpose date details. To the right, is the AC power inlet and Mini USB port that also doubles as an AV-out.

[RELATED_ARTICLE]The top of the camera is a sleek curve, with the flash docked in the body. Using the flash requires you to manually raise it. The hinge for the same seems reasonably well built, though we’d not go as far as calling it sturdy, just be careful it doesn’t snag on anything. There is no grip, rather a gentle curve that ends with a slash of chrome that results in a slight bulge in the region where your fingers curl around the body. This is not ultra comfortable, but one-handed operation is possible. The top of the camera sees a power button set amidst the zoom ring. Below this, is the elongated power button, and to the side of these, closer to the flash unit and the top of the camera, is the main dial, that is partially set into the body.

Note the large dial, and the shoot button inset in the zoom ring. Zooming is slow and smooth.

Moving to the rear, the 3-inch LCD has a hard plastic cover, obviously some sort of polycarbonate. However, these are fairly scratch resistant, and even Canon’s entry-level dSLR’s use the same material, albeit of a higher quality. Glass covers for LCD displays do not start below the EOS 7D, which is costly enough to warrant such goodies. The buttons on the rear are flat, but intuitively delineated. The jog dial with the function set button set at its centre is also pretty usable, although the click on the wheel is pretty weak and lacks feedback. The other buttons are set in the body near the dial, and are bevelled, aiding usability. All the buttons are pretty large, though due to the compact size of the body, people with medium sized or larger hands will have to bend their thumbs a lot, which is pretty uncomfortable.

Here's a look at the controls. The dial also acts as a four-way joypad but the click is very tacky. The other buttons are large and well laid out, but exude hard, clicky feedback.

The battery compartment and memory card slot are located on the bottom, beneath a single spring-mounted flap. It's well built and the spring is decent. Overall, the SX130 IS is well built, although with battery loaded, the cameras weight belies its size – it’s pretty heavy.

Click next to read on the features, performance, and our final take

There’s a fair bit of intelligence built into the SX130 IS, no doubt to compensate for the every increasing number of adopters, not all of which understand even the coarser points of photography. There are just three scene modes – kids and pets, portrait and landscape. The other scene modes are built into the auto mode. So whether you’re shooting in daylight, or night mode portraits – the SX130 IS will hopefully, make the best out of the scene conditions in auto mode. A pity that the flash needs to be raised in auto mode also, although we see the logic in this, as having the flash annoyingly pop up in auto mode, when it’s least needed, is quite a pain.

Smile detection is a neat feature, if you should need it. Movie shooting is available at a resolution of 1280x720 pixels at 30fps – this is a good enough resolution, for a camera of this size/price category. Face detect is another useful feature especially when shooting family photos. We found the image stabilisation also pretty good, however, at the long end of the zoom, you need to be careful as anything more than a slight shake will produce blur. For some reason, the IS system isn’t as good as the one on the Canon SX20IS.

Most of the settings are pretty easy to adjust, and as mentioned, the SX130 IS is pretty smart, although, not smart enough to raise its flash when needed most! That being said, having the flash not fire automatically in auto mode is a plus, and a welcome feature.

Does a 12-megapixel sensor sound impressive? Well, it is, for a compact camera. Unfortunately, with an ultra high pixel density of 42 megapixels per cm2, photodiodes are crammed on to an extremely small surface area and this has bad effects on suppression of noise. Sure, we’re not going to compare this to a dSLR, but even compared to a much older Canon A710 IS, a 7-megapixel camera, there is a lot more noise. This means that over some three generations of image sensors, controlling noise hasn’t become any better, while on dSLR’s this is the opposite – the EOS 7D for example, controls noise far better than the lower resolution EOS 50D. Not that noise matters for casual users, for when viewed a 6x8-inch thumbnail, there’s hardly any. But view the results full screen, and anything above ISO 200 produces visible noise, and a smattering of ill-processed pixels. Note that this is pretty much the case with all 10-plus megapixel compact cameras. This necessitates the use of a flash when shooting indoors, especially if you intend making prints, or viewing full screen, or working with 100 per cent crops.

Good detail on a per pixel level. The SX130 IS produces good quality images, although noise becomes an issue at ISO 400 and above.

When noise is controlled, images are generally clean, neutral and pretty detailed for an entry-level CCD sensor. If anything, the lack of a punchier dynamic range is annoying, although highlights are pretty good, they could be a bit better. In daylight, you will get very nice shots, with low levels of noise, but again, there dynamic range is less than the punchy output we expect. Shadow detail is lacking, even at ISO 200, and in overcast conditions, using auto mode will give you a slightly cool cast. Other than this, white balancing was pretty good, which most compact cameras are, but it's worth mentioning.

Face detection works well, and the SX130 IS focuses pretty fast, unless you’re shooting in relatively lower light, in which case it’s a proverbial tortoise, though faster than the Casio EX-S200. Overall, the performance should be sufficient for casual users and those looking to capture moments with family and friends. Video recording quality is good, and videos have good colour, and detail, highlighting is also fairly good, but at ISO 400, there is a bit of noise noticeable in darker regions.

[RELATED_ARTICLE]For Rs. 14,995, the SX130 IS isn’t a bad buy, though it’s expensive for the quality and features it offers. In fact, it’s a feature rich compact camera that provides good performance in well-lit conditions. As a result of bumping up the sensor resolution, noise becomes noticeable at even ISO 200, and at ISO 400 and above it’s pretty evident, ISO 800 being of limited use, unless you only need 600x600 pixel images. Street prices would be Rs. 2,000 lower – around 13,000 bucks, the SX130 IS still slightly expensive, though it’s certainly better than a lot of similarly priced super compact models. The 12x zoom is another plus, and for casual clickers this is a reasonably compact, yet powerful option.