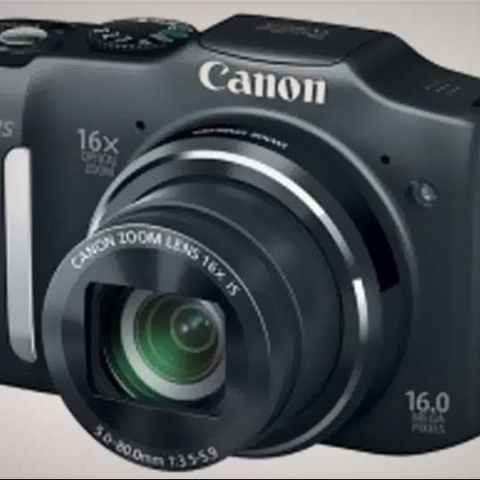 The SX160 IS has a lot to live up to, as it comes from a line which is known to deliver good features and performance with respect to price. Many a times, a newer camera does not mean a better camera than the predecessor, though that is expected. Sometimes, the changes are minor and cosmetic, and sometimes, the bump in image quality is barely noticeable. So, would you want to toss out your old camera just because a new one is out? Those are the questions we tackle when looking at the SX160 IS, since weï¿½ve owned several of its predecessors. Read our full review to find out if it actually is worth upgrading to.

Canon has a long standing history of producing great cameras, one of which was 2009’s Powershot SX120 IS. Since then, this point and shoot line has seen several upgrades, every year in August. We absolutely loved our SX120 IS, so when we got the newest version of the camera – the SX160 IS, we were extremely excited to figure out what new capabilities it offered.

For starters, the camera features a 16 megapixel sensor, 2 megapixels higher than the SX150 IS, a lower model point and shoot camera. Interestingly, Canon has stuck with the CCD type sensor for this lineup of camera from the beginning. It was a little disappointing at first to note that a back-side illuminated sensor was not part of the deal.

Build and Ergonomics
With the SX120 IS, Canon had pretty much nailed the ergonomic design. The camera was great to hold and use, with a button layout that made accessing most features very easy and intuitive. Nothing has changed in that regard to the SX160 IS. It’s still a great camera to use, well balanced with a flash that needs to be manually raised in the event it is needed (by the push of a button). The buttons are placed exactly the same way they are in almost every single Canon point-and-shoot camera, so if you’ve ever used one of Canon’s cameras, you’d know almost immediately where everything is.

The body of the SX160 IS gave us some mixed feelings. While we do like the cleaner flatter look of the camera, for some reason, it feels quite plastic-like to us. We received a silver model (matte finish) that is supposed to emulate brushed metal. Normally the phrase “plastic-like” tends to denote flimsy or weak, but that is definitely not the case with the SX160 IS. It feels sturdy, but one look at the camera and you know it’s made of plastic. The metal lens mount ring, though a good practical solution to protecting the lens, adds to the polarity of the plastic-metal design of the camera.

Lastly, the buttons are inset into the body of the SX160 IS, but easy to press. There is a dedicated video recording button right next to a 3x3 grid of ribbed dots, which we feel are for resting the thumb, but honestly, the flat surface doesn’t do much for thumb comfort. The right side of the camera has a neatly tucked away rubber door, behind which lie the mini-HDMI and mini-USB port for connectivity. At the bottom, we find a battery door which houses 2AA cells and an SD card slot.

Features
The Canon Powershot SX160 IS packs in quite an impressive set of features, which doesn’t seem like much if you compare it with the SX150 IS, but observing the growth of this camera overtime, you realize it has come a long way. For starters, it packs a 28-448mm optical zoom, but suffers in the aperture arena a little bit. While the SX150 IS’s aperture moved between f/3.4-5.6, the SX160 IS loses a little by having an aperture range of f/3.5-5.9. We’re talking about barely half a stop of difference here, but when you’re zoomed in at the entire 448mm, even that half a stop can make a lot of difference. The video on the SX160 IS gets a very slight bump in video spec too, retaining the 720p video recording, but also offering 25p frame rate along with the standard 30.

Here is one thing that we absolutely love about the SX160. It runs on AA batteries. Now, you must be wondering how constantly spending on new batteries can be a good thing and we’re going to tell you how. Ever been in a situation where you need your camera but the battery died on you prematurely? Yeah, good luck finding a proprietary lithium ion pack to power your camera. This is where AA batteries come in handy. Now only are they cheap to purchase, but they can be bought practically anywhere (except the North and South Pole, we hope).

We also really like that just like its predecessors; the SX160 IS maintains a full suite of PASM modes that can be easily accessed using a mode dial. Lately, we’ve been seeing that the PASM options along with the mode dial have been disappearing from a lot of point-and-shoot camera segments, deepening the divide between the regular cameras and the advanced ones. The SX160 IS isn’t an average camera and certainly by no means an advanced point and shoot, so seeing the PASM modes here is a great relief as it allows some creative control even for those who might at some point want to experiment.

Image Quality
Now the IQ part of the SX160 IS is something that we were hoping a lot out of. Like we had said earlier, the camera houses a CCD sensor instead of a back-side illuminated CMOS sensor. Traditionally, CCD sensors were known to have better noise performance than a CMOS sensor, but with the BSI CMOS sensors, that has changed, with the two performing at par, if the latter not doing better.

The images out of the SX160 IS look as vibrant in color and with a good deep contrast. The images, especially those shot in daylight, tend to be exposed in favor of the highlights, causing the detail in the shadow areas to dip a little more than we’d have expected. What did, however, impress us is the measly 1cm minimum focusing distance for macro shots. Of course, given the right light and shooting conditions, this can yield some of the most amazing images one would come across, but we found that at such a close distance, there was often the shadow of the camera itself making an appearance in our shot. Minimum focusing distance seemed to increase drastically as we zoomed in. Regardless, we love the ridiculously small minimum focusing distance. The images shot at this range come out tack sharp too, with very little to no JPG artifact.

The low light performance of the SX160 IS left us feeling quite disappointed. As good as it performs in good light, the low light performance on this camera leaves a lot more to be desired. We noticed that as soon as we moved indoors, the camera had a hard time not only acquiring accurate focus, but also developed noise very quickly, not just in the shadows, but also in the mid-tones. We’re not even talking about night time, but just day time indoor shots with a decent amount of sunlight streaming in through several open doors and windows. Skin tones were also quite easily effected in low light, with browns quickly developing red dots.

The video behavior of the SX160 IS follows the same pattern as the image quality. Great video quality in broad daylight, with a tendency to expose for highlights, but low light video is just riddled with blotches of red and blue dots. We’re not happy that the camera is still limited to just 720p recording as many in this segment have moved on up to 1080p.

Conclusion
The Canon Powershot SX160 IS is a camera that comes from line of cameras that have historically and very delicately balanced the price, feature set and overall performance. The SX160 IS does pretty well in that regard, but compared to the SX150 IS, we really wish it had more to offer than just a bump in focal length and megapixel count. Improvement in low light performance would have been greatly appreciated and 1080p HD video would have made this our favorite camera. Then there is the finish we’re not too fond of, which makes the plastic construction of this camera a little too obvious.

However, not everything about this camera is bad. We love the focal length, especially the relatively wide 28mm starting focal length. There is also the PASM mode dial and full control on the shooting that’s great. The macro mode on the SX160 IS is also another feature that we’ve absolutely enjoyed playing with. Let us also point out that the camera costs just Rs. 12,995, which is far less compared to what you’d pay for other models from different manufacturers. All in all, if you’re on a tight budget, but require at least above average image quality with a good focal length, we’d say you should definitely go for the SX160 IS. If you’re already using the SX150 IS, we’d say keep it and wait for the next upgrade as the 160 isn’t really that much of a phenomenal upgrade from its one generation old model.