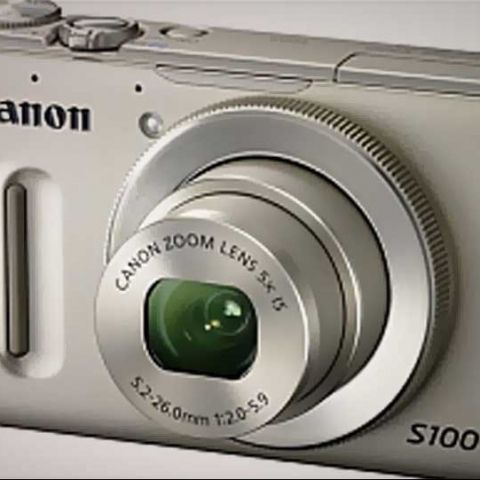 On evaluating the scores for each of our tests, we found that Canon Powershot S100, dethroned our last year's best performing camera ï¿½ the Olympus XZ1. This is the best high end compact in the market today. You will never fall short of any features including the battery sipping GPS. Pricing is definitely on the steeper side as at Rs. 26,999 you can easily get the Canon EOS 1100D. But then this camera is for the discerning photographer, who wants excellent quality in the compact body.

Canon Powershot S100 is the latest high end point and shoot camera from Canon's Powershot series. High end point and shoot cameras belong to a class of cameras that are targetted towards enthusiast community, who want a feature-rich, performance oriented camera having manual functionalities but all packed in a pocketable form factor. It can act as a great companion to the higher end DSLRs and also in itself it packs in quite a punch for those who want DSLR like functions in a smaller form factor.

The S100 sports a wider aperture of f/2.0 which ensures sharp images even under low lighting. But this aperture redues to f/5.9 on the telephoto zoom end which is a bit annoying. The S100 houses a 12.1 MP 1/1.7-inch CMOS sensor along with a new DIGIC 5 image processor. Canon claims that this image processor works six times faster than its previous iteration. Optical zoom has been bumped up to 5x covering a range of 24-120mm (equivalent). It houses a GPS chip within it which not only makes geo-tagging a piece of cake, but it also has this mode called GPS logger which when activated maps your entire journey even when the camera is off. The S100 is capable of shooting in RAW mode. Its high sensitivity sensor ensures a better ISO range from ISO 80 to ISO 3200. Its video shooting mode goes upto 1080p. So as we said before, it packs more than a punch in this compact body.

Just like its predecessor, the Canon Powershot S95, the S100 comes in an all black matte-finish metal body. The rubber grips on the thumb rest and a longitudinal one on the front face of the camera provide ample grip for the camera and the matte finish also helps in holding the camera comfortably without the fear of slipping.

On the front face you have the control ring around the lens barrel, which can be programmed for certain functions such as exposure, shutter, aperture, among others. The camera has already given some default functions to the control ring is respective modes such as it controls ISO in the P mode, Aperture in the Aperture Priority mode or Manual mode, etc.

On the top you have the pop-up flash unit on the extreme left hand side. When it pops up, holding the camera edge on the left hand side is tricky and you may not get a very stable grip. As you go to the right there is the on/off switch, followed by the shutter and the mode dial. The zoom lever is present around the shutter button as is the norm with most Powershot cameras. On the rear side you have a 3-inch LCD screen which has a resolution of 461k dots. The display is quite vivid. It lacks any sort of viewfinder. The arrangement of buttons on the rear side is quite intuitive. The Ring Func button can help you assign specific functions to the control ring. Beside that is located the video record button. Below this you have the four way pad which has a movable ring around it which can be used for adjusting aperture/shutter in those modes or can be used for toggling between images in the preview mode or navigating options in the camera Menu. The Preview mode button and Menu button is located at the base of the rear side. Accessing all these buttons is quite easy even with a one hand operation.

The user interface of the camera is typical Canon, with neatly laid out menus under various tabs. For someone familiar with a Canon camera, it is quite intuitive. If you do not want to access the Menu, you need to pull up the Func. Set button in the centre of the four way pad, which brings up a menu on your screen from which you can make the necessary selections.

Visit Page 2 for our look at the Canon Powershot S100's performance, and our verdict...

The high sensitivity sensor in the Canon S100 gave impressive results. Around ISO 1600 most of the high end point and shoot cameras start getting noisy. We noticed at Canon S100's output at ISO 1600 was comparable to the output from Nikon P7100 and Olympus XZ-1 at ISO 800. We got really good images with S100 at ISO 1600 and usable ones at ISO 3200, but with prominent noise at 100 percent crops. As you notice in the images above at 100 per cent crop, the image quality is comparitively better with S100 than the P7100  and XZ1.

In the sharpness and detail test shot the Canon S100 gave a brilliant performance with every strand of the thread visible perfectly including in the black and dark brown threads, where it is difficult to separate out the threads. At ISO 400 also we could disstinguish between individual threads. Also the colours on the threads appear natural and crisp.

The other object used in the sharpness test was a sound card where we tried focussing on the IC numbers and the fine soldered pins of the IC. As is visible in the image, the sharpness is quite good. IC numbers on the soundcard on the left hand side are clearly legible.

In the studio macro test, we shot a portion of an LCD screen to see how well the pixel clarity was. We noticed that the Nikon P7100 had a better pixel clarity than the S100. Outdoor Macro shooting was quite good though but make sure your focus in on Manual, as you dont want the camera to keep hunting for focus.

In the video shooting mode Canon S100 was quite better than the competing cameras despite the minor shakes while panning horizontally. Focussing wasn't an issue even while zooming onto the subject. Colours and details were quite good. There is a slow motion mode in the camera which shoots video in real time, but can play it back at a crazy 240 fps giving a really great slo-mo effect. But you can only get that at a moderate resolution of 640x480 pixels. Indoor shooting did result a bit noisy as compared to the outdoor mode.

We really liked the HDR mode of the camera which shoots a series of three images and gives you a well exposed image finally. But you need to make sure that your hands are rock steady, else make use of a tripod. The battery output is around 200 shots, but if you use functions such as RAW mode, GPS, Low light mode, HDR mode, full HD video mode then the battery is sipped much faster. You will most likely want to invest in another battery pack, as with this camera, you will really want to go all out and make more than 200 photographs on a single outing.

On evaluating the scores for each of our tests, we found that Canon Powershot S100, dethroned our last year's best performing camera – the Olympus XZ1. This is the best high end compact in the market today. You will never fall short of any features including the battery sipping GPS. Pricing is definitely on the steeper side as at Rs. 26,999 you can easily get the Canon EOS 1100D. But then this camera is for the discerning photographer, who wants excellent quality in the compact body.