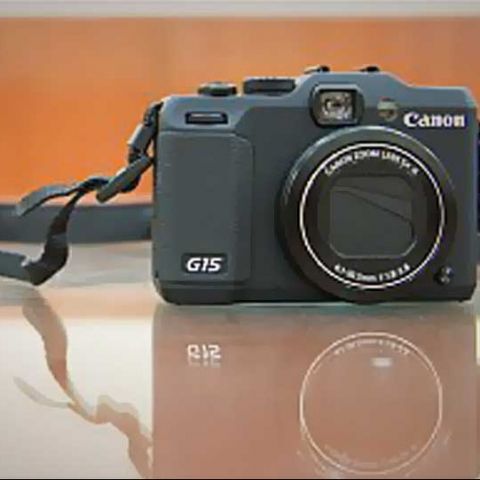 The Canon PowerShot G15 the newest addition to the G series of Canon, is an advanced point and shoot camera that is just full of surprises. It improves on many things when compared to the G12, at least on paper and we wonder if that actually translates into any real world performance. Despite a small sensor, it manages to squeeze out every bit of performance from a tiny, non-BSI sensor. However, the G15 is not a very pocketable camera and must be carried around in a separate case or hung around the neck using the supplied strap. For Rs. 34,995, the Sony DSC-RX100 stands out as a serious competitor, with slightly different benefits. . If you're a brand loyalist or just prefer the sturdy ergonomics of Canon, then the PowerShot G15 is the camera for you.

There are quite a few point and shoot cameras out there in the market today that will appeal to the enthusiast shooter, so when Canon releases the PowerShot G15, we wondered whether it’d be a good fit in the segment.

The Canon PowerShot G15 carries the looks and build, the controls and dials and the feature set that qualify it as part of the advanced camera segment, but does the performance of the G15 grant it the title? We find out.

Specifications and Features
The Canon PowerShot G15 runs off a 12.1 megapixel CMOS sensor, which is not of the Back Side Illuminated variety. Given the tiny 1/1.7-inch real estate occupied by the sensor, we’d really hoped that Canon would at least use a BSI sensor, if not a bigger sensor in the first place. Complementing the sensor is a single Digic V sensor to handle all JPG and RAW files that can be shot off at a rather slow 2.1 frames per second. As far as the optics go, the G15 manages to make quite an impression with its 28-140mm f/1.8-2.8 lens, especially when compared to its predecessor the PowerShot G12, which had an aperture range of a disappointing f/2.8-4.5 along the same focal length. We absolutely love the G15 for its fast aperture which makes it easier to shoot in low light situations a reality. The lens is optically stabilized up to 3 stops, to allow for more hand-holding during slow shutter-speeds.

Build and Ergonomics
Canon has really spent a lot of time rethinking the ergonomics of the G12 and it shows when you look at the G15. The entire top of the G15 has been reworked, replacing the dual-stacked dials on the G12 with a single mode dial. Canon also added a horizontal dial to change aperture or shutter speed (depending on the mode) placed comfortably on the back where the thumb can easily reach it. The exposure compensation dial is inset into the body, just under the mode dial, clearing up the left edge of the camera for a pop-up flash. Yes, Canon has replaced the ancient front facing flash with a pop-up design which can be triggered using a mechanical switch. Canon has done away with the dedicated ISO dial, which we’re sure won’t be appreciated by some, but the reduction in size is a fair enough trade-off, is what we feel.

The changes to the top have allowed the G15 to shed a significant amount of thickness, a whole 5.5mm worth of thickness when compared to the G12. It still won’t fit into your jeans pocket, but carrying it around in cargo pants should be no trouble at all, though we don’t recommend it. We loved how easy it is to access various functions on the G15 like aperture settings, focus modes etc. The dedicated movie record button was a little too close to the right edge for our comfort though, however, it wasn’t terrible.

The build quality of the G15 is once again quite exceptional. It has a solid build thanks to Canon’s usage of both metal and plastic in the G15’s construction. The buttons are extremely sturdy and will withstand any and all kinds of use you can throw at them, although we did feel a little worried about the leaf shutter than protects the front element of the lens. If you’re going to be keeping this camera in your pocket, we recommend ensuring that no other hard objects be in that pocket. They could potentially poke through the leaf shutter and damage the lens.

An interesting observation about the Canon PowerShot G15. While most advanced point and shoot cameras are treading towards at least one ring for manual control, mostly an aperture dial on the ring, the Canon PowerShot G15 has chosen to stay away from that trend and instead stick to its tried and tested form factor.

Image Performance
Since Canon didn’t slap in a BSI sensor into the PowerShot G15, we feel that the 12 megapixel count is good to keep the noise levels low, although some people might find the pixel count a little on the lower side, especially given how the competing cameras are all mostly giving a higher pixel count. Keeping that in mind, Canon has definitely managed to strike a very delicate balance between specifications and performance as the images from the G15 are quite amazing. Let us elaborate.

For starters, 90% of our PowerShot G15 test shots were taken in Manual mode, with the remaining in Aperture Priority. Our tests included a lot of nature shots and some low light along with one particular set of photos being shot in a club with only near-ultra-violet light. All images were shot in Camera RAW format to maximize the output of the sensor.

In our landscape shots, the first and most obvious observation we made was with respect to how vibrant the greens seemed to be. Having the PowerShot G15 on auto white balance and shooting on both sunny days and days with a heavy cloud cover, we noticed that the camera had a tendency to render the image with just a touch of a warmer tone. The tone became warmer when we moved indoors and shot under artificial light (incandescent or CFL Bulbs). The lens on the G15 is incredibly sharp, with both the centre and the edges throughout the aperture range.

One area that the PowerShot G15 really impressed us was focus. Normally, point and shoot cameras have terrible focussing in low light, but when mixed light or single colour lights come into play, the camera will tend to back or front focus. However, the story with the G15 is quite different. While it didn’t lock focus for us in conditions of pitch black (which is sort of an obvious), it did manage to acquire focus even in a candle lit room.

However, what was more impressive is that when we took it clubbing with us, and shot in an environment lit by just deep blue light (almost hitting the UV spectrum), not only did the G15 lock focus, but it did so quite accurately. Of course we had to raise our ISO to 3200 and drop the aperture to f/1.8 to get useable shots, but at least our shots were in focus. However, when we did hit those cruel numbers, we did see very obvious drop in image quality. Our shots were showing significant noise in all areas of the image, with the shadows taking most of the damage. The high ISO combined with the large aperture also resulted in softer-than-normal images, which isn’t ideal for anyone wanting to make large prints, but for small online viewing, the images could be salvaged through Adobe Lightroom.

When using the Canon PowerShot G15 in Aperture Priority mode, we noticed that shooting was quite simple. The aperture was modified using the horizontal dial near the thumb’s resting place and the exposure compensation dial was just above it, a touch tougher to move. But all in all, it’s much quicker than having to go into a menu to change settings, and that bit Canon has nailed just perfectly. The overall operation of the camera is rather quick, all the way from locking focus to firing a shot, all in under 2 seconds, which is very impressive. Unfortunately, don’t be expecting to shoot any high speed sports with the G15, as its maximum burst mode is limited to 2.1 frames per second.

When looking at the video quality of the PowerShot G15, we walked away very surprised. We shot a small clip in a rather dimly lit café (the kind where most point and shoot cameras give us noise), but the G15’s footage not only looks very well lit, but is absolutely noise free. Not only that, the stereo mic does very well in recording audio when the sound source is close, and turning on the wind reduction filter does help, but not so much when the subject is far away. Zooming while shooting video is a little slow, but damn near silent, which is very good as it ensures your video has only the intended audio, and not the whirring of the zoom motor. The camera also manages to keep the subject in focus for the most part, unless you’re shooting a busy location with too many distracting elements.

Conclusion
The Canon PowerShot G15 is an advanced point and shoot camera that is just full of surprises. Despite a small sensor, it manages to squeeze out every bit of performance from a tiny, non-BSI sensor. It packs a wallop of features and really steps up the game with an incredibly fast lens which is capable to capturing rather sharp images. We do, however, feel the bulk all these features come in, as the G15 is not a very pocketable camera and must be carried around in a separate case or hung around the neck using the supplied strap. We also had hoped that Canon would have gone the “bendable” flash route like the Sony DSC-RX100, whose flash can be bent backwards to get a nice even fill, but that would perhaps be asking for too much.

For Rs. 34,995, the Sony DSC-RX100 stands out as a serious competitor, with slightly different benefits. If you’re a brand loyalist or just prefer the sturdy ergonomics of Canon, then the PowerShot G15 is the camera for you.