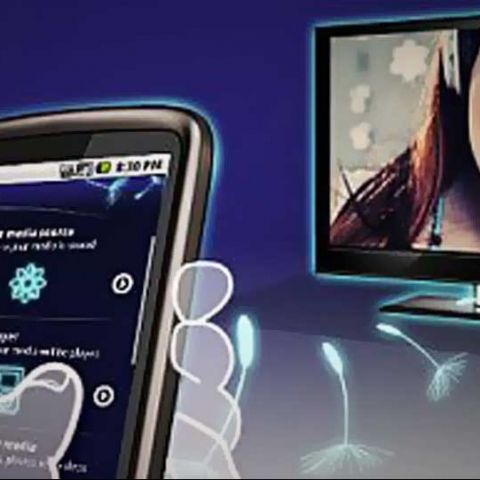 This is the app that brings your Android smartphone into the home entertainment setup. A quick handshake with most media streaming devices on the network, and you will be enjoying videos, pictures and even music on the television. However, this doesn't hide the fact that Skifta will play limited video formats.

It has always been a mood spoiling factor when you realize that you want to watch a video on your phone on a big screen television, but don’t have an HDMI cable lying around or your phone doesn’t have the HDMI out anyways. However, if you are using an Android phone, there is a solution.

How to get it

This is a 4.5MB download available on Android Market. All you need to do is search for Skifta. The app is made by Qualcomm, and is free to download. Works with all phones having Android 2.2 and beyond. You should ideally be connected to Wi-Fi, saving you from extra data charges in the mobile bill. And also because you will need to be on the wireless home network anyways for this to work post install.

This is the app that allows you to stream videos, pictures and music from your phone to any DLNA capable network device. Till now, you had to scramble for an HDMI cable to connect to the TV, and there was certainly a bit more teeth gnashing when the realization struck that there was no mini HDMI cable.

Once connected, the app will do an update. For the first time, this update may take about 5 minutes, but for every subsequent launch, this process will only take a few seconds. The next screen is where you select the source the media is coming from. It can be your smartphone, or any DLNA capable PC on the same network. In case it is a PC on the network, Skifta will work as a remote.

The next step is to select the device that the media will be sent to for playback. Any network capable DLNA device will show up on the list - network media players, streamers, televisions, Blu-ray players etc.

Once the app ensures the handshake with the network device is successful, the next selection is activated. For simplicity, the content is cleanly separated into three categories - videos, music and pictures. The content lying on your device’s internal memory and memory card will be listed automatically in the correct place.

We connected Skifta to the WD Live media player, on the same home network. Once that was done, it is as simple as tap file to play. Since you have already preset the destination device in the first menu, there is no need to do that every time you play any media.

Audio playback was quite smooth, and it took a second from the time you clicked the file on the phone to the time the playback started. There is a similar waiting period for most high res images. The playback was smooth, and even selecting different media at quick speeds generated a smooth and sure response. Since it does not do any processing on any media being played back, the quality will be the same as what is on the original content.

Video playback is good for the most part. Select a video and it takes about 2 seconds before the playback starts on the device. Let us state here that this time is also dependent from device to device, and will vary a bit. All SD files in AVI format played back effortlessly. However, the playback of MKV and the M2TS files was disappointing. While you can see these files within the app, most HD containers aren’t supported. And since Skifta doesn’t rely on any third party media player for the playback needs, installing any media player on the phone wont help.

This is the app that brings your Android smartphone into the home entertainment setup. Quick handshake with most media streaming devices on the network, and you will be enjoying videos, pictures and even music on the television. However, doesn’t hide the fact that Skifta will play limited video formats. But then again, there really isn't any good alternative that does what this app does - makes your smartphone the hub in the home theater setup.