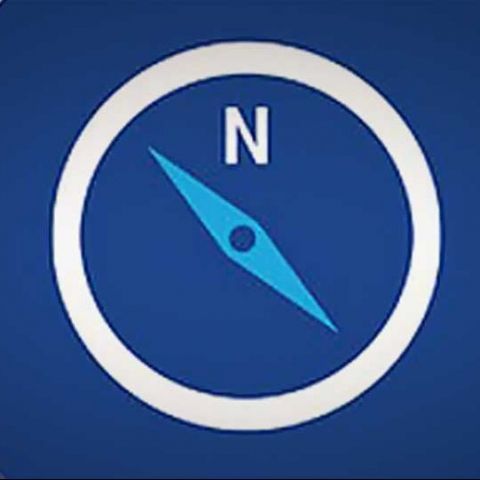 Nokia's rebranded Drive navigation app, Here, is here. But does it really do as well as other navigation apps out there? Is it even useful? Apple Maps is just flat out useless in most situations if you're trying to navigate in India. Those who updated to iOS 6 unknowingly, or by mistake have been at a loss of a good, simple and reliable navigation app that was free, until now. We loaded up Nokia's Here onto our iPhone and get lost in the city of Delhi to figure out if Nokia Here can get us back to where we need to be

Nokia’s had a pretty rough patch lately, with the company not doing so well financially. Banking its future on the Windows Phone platform (as much as they may deny it), many have considered it to be a deathblow to the company, while the other camp feels it’s the safest bet. Regardless of what their future may be, Nokia’s not going to be wasting too much time worrying about that and is instead focussing on releasing good products for its users.

Nokia Here is one such product. After rebranding their Drive suite of navigation offerings to Here, Nokia has gone out and released the app on iOS. We downloaded it immediately and went rampant in the streets of Delhi, driving to as many popular (and obscure) locations as possible. We’ve been using the app quite extensively, and before we get into our review of it, let us just give you the breakdown of the phone this was tested on, an iPhone 4 (16GB, black, if that matters) running iOS 5.1 (jailbroken, obviously). Why not iOS 6? <begin:rant>Well, because Apple Maps is gross and we wouldn’t touch it with a 10 foot digital pole. </end:rant>

User interface
Okay, so the user interface of Here is bittersweet. It’s got that flat look, once we’re so used to seeing on Windows Phone 8 (or prior) devices, and we can’t help but feel that this is a statement of Nokia’s commitment to the Redmond company. Regardless, its not something we’re complaining about. The simplicity of the UI is actually quite nice, and given that the app is completely HTML5 based, its pretty damn quick to do its thing even when running on an iphone with a ton of Cydia tweaks and maxed out storage. 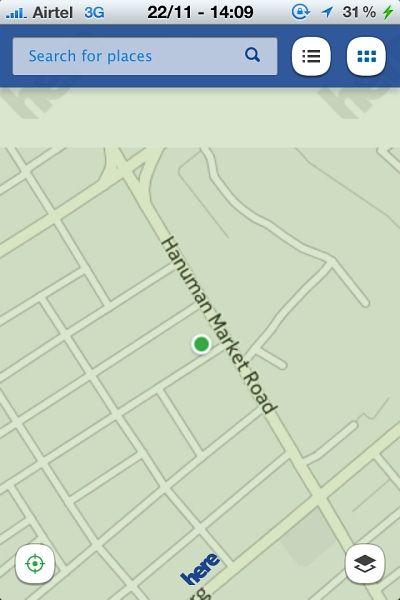 The Nokia Here interface follows a very similar design to Google Maps. The bottom left corner has the “locate” button, clicking which pin-points your location on the map. Unfortunately, tapping it again doesn’t give you the arrow head, the one we see in Google Maps that shows which direction you’re facing. Regardless, the interface is very minimal, with the bottom right of the screen having a “layers” filter, which allows you to selectr from a variety of “views”. Currently, Here offers Map, Satellite, Public Transport and Live Traffic views, with the last one still being in beta. The other UI elements of Nokia Here include a button that brings down a menu containing options like “add to collections”, “search”, “route”, “feedback” and “about.” All these are pretty self explanatory, but the Add to Collections feature is something we found to be quite nifty. What it did was it allowed us to create individual “groups” such as “coffee shops”, “preferred dinner places” etc into which we could add specific locations. This data in turn gets sync’d with the cloud (sign-in required using Facebook or Nokia Account) and is therefore available on any device you have Here installed on. 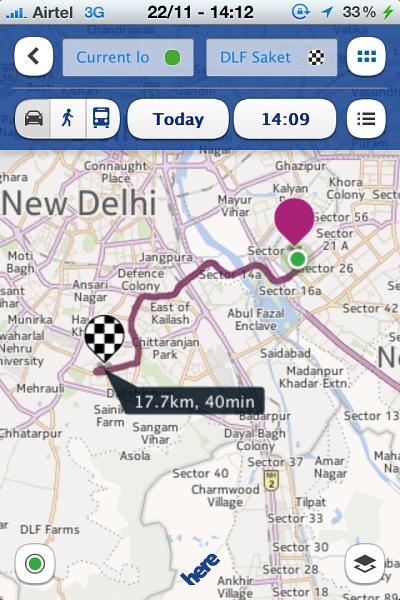 The great things about Collections is that once you have added a place to your list, you won’t have to search for it again. This is pretty handy in the long run, once you’ve built up a large list of locations. Of course, if you go to a place several times, you’d obviously know how to get there, but this is useful in two particular situations. Firstly, if your starting point is not your home, meaning, you’re in some obscure location and need to figure out how to get to your favourite Coffee Shop, lists come in handy. The second scenario, and one we use VERY often, is to just check up on how bad the traffic is on a particular route, from Point A to Point B. 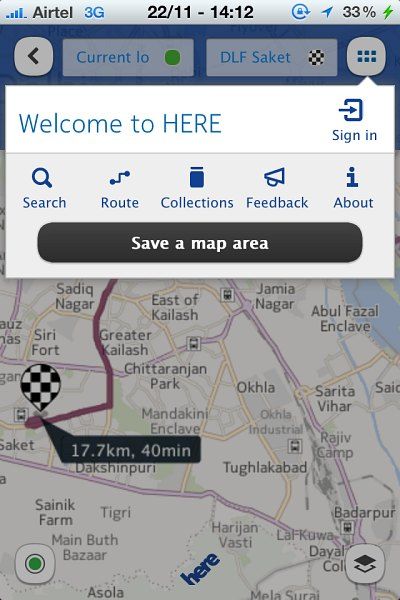 How good was it?
Ok, so we started from an obscure place, one that doesn’t have a name of its own and tried to route to a very popular mall in a very popular part of Delhi (DLF Mall, Saket) and Here mapped the directions pretty easily. However, there is one thing it lacks severely when compared to Google Maps. Doing the same search on G-Maps, we received three routes, one primary and two alternate routes, to get to our destination, but Here only served up one. We’ve noticed that in Delhi, alternate routes definitely come in handy, especially when the primary one is clogged with traffic. 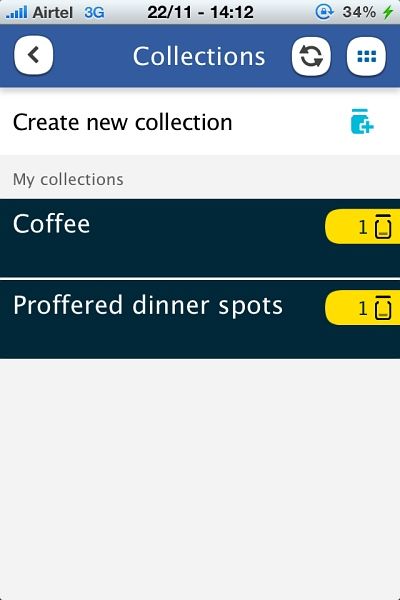 After going from an obscure place to a popular place, we decided to make our search parameters a little more difficult for Nokia Here. Instead of choosing something as prominent as a mall, we went with an obscure café in Hauz Khas Village. Now cafes there come and go, and some of them don’t even really have a listing in most places where you would find places listed. Once again, Here got us all the way to the doorstep of the said Café, but we had to switch from driving directions to walking directions after a point as cars are not allowed beyond a point in Hauz Khas Village. 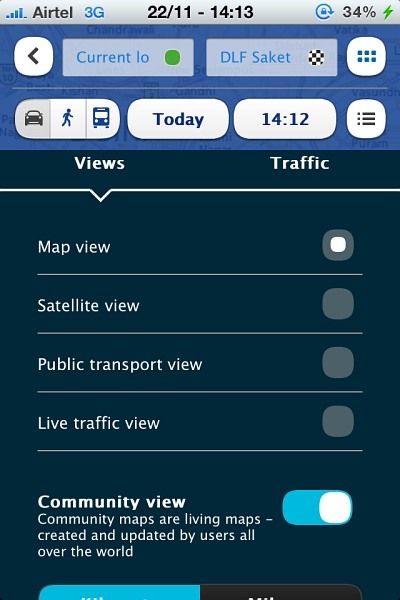 Speaking of walking directions, we’re not really sure about the utility of this option here in India. Unless you were on foot and lost, we wouldn’t find ourselves using this option a whole lot. Thankfully, for the sake of this review, that is exactly what happened when we got out of the car to get to the said Café. The great thing about the Nokia Here walking directions is that it’s got voice guided navigation. This is really great if you’re listening to music and trying to navigate through streets you’re not familiar with. 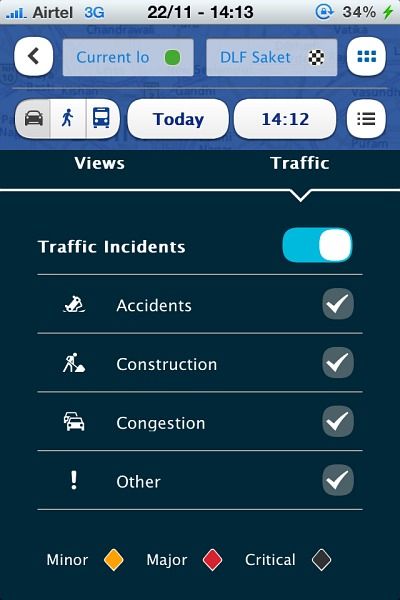 The one thing about Here that left us very impressed is the fact that no matter what location we input, it found it. Whether it’s a random sector in Gurgaon, or an unknown pub in Daryaganj. Here had no issues finding the place and a way to get us there. The best part, all we had to do was enter a name and it would show us the potential matches right away, having the location we wanted in every single search.

Another excellent feature of Nokia Here is the ability to save maps for offline use thanks to the snapshot tool, where you can decide how much detail you’d like to save along with it. Map data can be large, so make sure you’re using wifi when you do it.

Verdict
Apple Maps in iOS 6 was quite a debacle. Many who upgraded in haste have found it to be frustratingly unhelpful, especially if you’re outside the United States. The only way to get Google Maps back, which almost everyone wanted, was to go back to iOS 5, which is impossible unless you’re jailbroken and have a bunch of signature files saved. If you’ve been a “good person” chances are you got screwed over with maps after going up to iOS 6.

However, users of iOS 6 finally have some respite with Nokia Here. It’s ironic that the Star of Windows Phone 8 devices has managed to put out such an excellent app for iOS users. Nokia Drive for Lumia devices has already been a huge hit with the users, especially with respect to Indian roads. Nokia Here, doesn’t match up to some of the features of Google Maps for sure, especially with respect to alternate routes, but its definitely excellent as far as giving routes is concerned. If you’re on iOS 6, you don’t have to be frustrated anymore. If yo’re on iOS 5, feel free to update to iOS 6 and use Nokia Here, unless your reason to stay on iOS5 is the untethered jailbreak.