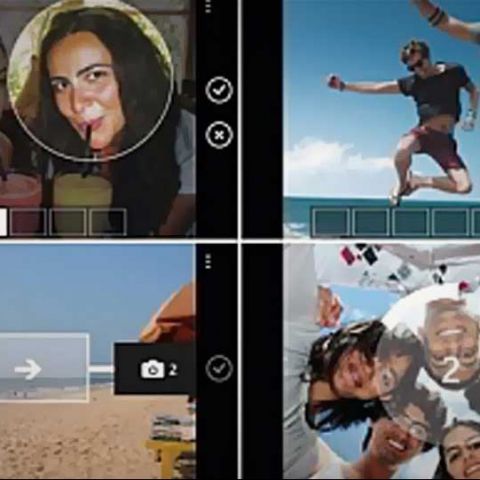 The Nokia Camera Extras app is now available for download for Indian Lumia users, and with all its features, is well worth downloading for all those who like to snap away merrily!

Nokia’s Lumia range would come with special apps that would not be available for other Windows Phone devices. To start off, the Lumia range received navigation-centric apps like Maps and Drive, and after a firmware udate, have now got Camera Extras, an app that gives a definite fillip to the cameras on Lumia devices. Announced about a month ago, it is now finally available for Indian users of Lumia devices.

Available in the “Apps from Nokia” section of the Windows Marketplace (accessible on Lumia devices), Camera Extras is a relatively lightweight app at about 2MB and installs without any hassles whatsoever. Just make sure you have updated your Lumia handset (it works on the Lumia 610, 710 and 800) to the latest version of firmware - head to “Phone update” option under Settings to find out more. Once you have your phone up-to-date, you will be able to install and run Camera Extras smoothly.

Not that you will realise it, of course. For, notwithstanding the presence of a “Camera Extras” app in the list, the app actually blends smoothly into the device’s default camera app. Tap the Settings icon after launching your camera, and along with the usual options on your device, you will see a new one called Camera Extras with four sub-headings beneath it “Smart group shot,” “Action shot,” “Panorama,” and “Self timer.” 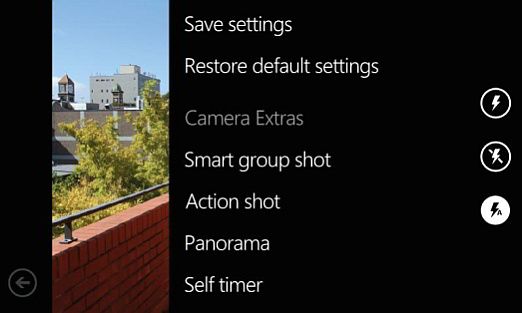 Camera Extras blends right into your regular camera app. You can find it under Settings. No separate app to open.

That might not sound like much on the surface. But scratch a bit and you will get a whole lot underneath. Perhaps the most intriguing of the lot is the Smart group shot option. As its name indicates, the app has been designed to take group photographs. What it basically does is take five pictures of the group in quick succession and then magically works out which each person’s best expression across those five shots and then puts all those best expressions together for one really smart shot. So for instance, if you had your eyes closed during the first shot or had looked away in the fourth one, the software will reject these and instead try to find a shot in which you are looking at the camera and then place that expression in the final group shot. 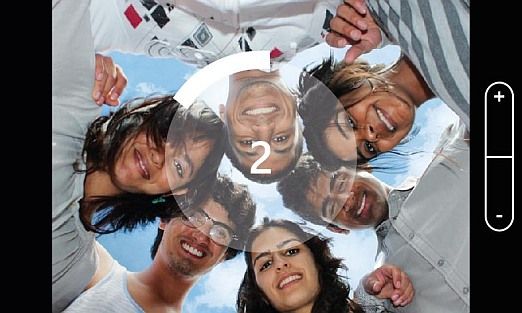 The timer function lets you set a time after which the camera will take a snap - regular, yes. Handy, yes.

And if that does not strike you as being cool enough, the app also lets you check out other expression options - just long press on the face of a person whose expression you are not pleased with and you can see the series of expressions of the person right through the shooting session, and choose the one you think works best. So if you are in a mood to be really cruel, you can actually create a group photo comprising the worst expressions of each member of the group - we did so a few times, and our take: it’s fun! 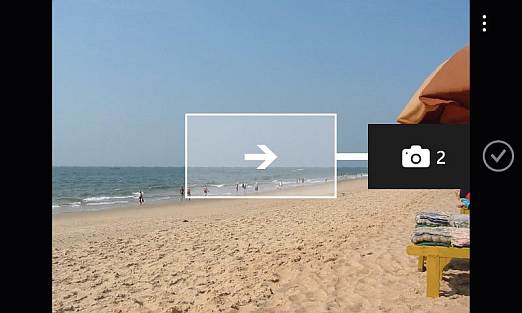 What marks the Panorama function out is the fact that it tries to guide you right through the shooting process via two icons.

Coming a close second to Smart group shot in terms of magical ability is the Panorama shot mode, which stitches together a series of pictures to create a panorama. Now, we have seen many cameras come with Panorama mode (the Deepika Padukone Sony Cyber-shot ad made it a rage) but we must confess that we like the way the one in Camera Extras works. You start by pressing the shutter and moving your camera in a clockwise direction, and in a very neat touch, a box and a camera icon appear on your display as you move. You have to move your phone in such a way that the camera ends up in the middle of the box, at which stage a snap is taken. Move too fast and the icons will not appear. It takes a bit of getting used to, but is a whole lot better than all those “you are moving the camera too fast” messages that appear in the Panorama modes of many other camera apps. The app takes five shots (you can stop it earlier if you wish) and then stitches them together to deliver a panorama. And the results are pretty good, especially if you are using the 8.0-megapixel shooter on the Lumia 800. 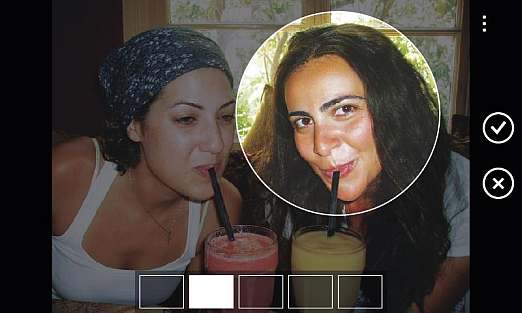 The piece de resistance of Camera Extras - the Smart group shot function that picks the best expressions of people to create that perfect group picture!

Action shot and Self-timer are relatively run-of-the-mill in comparison. The former lets you keep taking shots as long as you have the shutter pressed and the latter gives you the option to set a time after which a picture will be taken. They work smoothly enough, but unlike the Smart group shot and Panorama modes, are not really going to rock your cameraphone world.

Mind you, both those functions suffer from the same fundamental flaw - one of speed. Be it a Smart group shot or a Panorama, you will have to spend a minute or so twiddling your thumbs and fearing that your phone has hung while the app puts things together. AND if you hit the “back” button, everything goes right down the drain and you will have to start from scratch. Will the multi-core goodness finally headed our way in Windows Phone 8 cure this? We know not, but as of now, we can safely say that if you do not mind waiting for magic, the Camera Extras app does deliver it on Lumia devices. It does not do a whole lot, but what it does, it does very well indeed. Good enough for us to park it in the “must download” category for all ye who possess a Lumia.