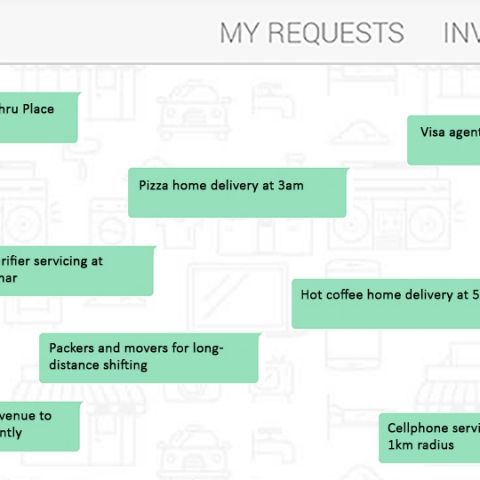 Goodservice is pretty much the all-time assistant you’ve always needed. Fast and zippy, with efficient responses, this app can actually help you in a number of different situations - be it house-hunting, to finding an electrician for an obsolete television, to ordering for food as late (or early) as 3:30am. And the good folks at Goodservice are incredibly friendly and helpful too. Additionally, the chat-based format and widespread availability of internet connectivity goes hand-in-hand with Goodservice’s policy of providing assistance via texts, rather than calling. Services are still expanding to other platforms and even more are being added, and with that, Goodservice is surely one of the must-have apps now.

The first thing that caught my eye, after downloading Goodservice, is the really simple and functional interface. Goodservice is an app that aims at providing ‘good service’ to its users, and it has a no-extravagance facade to begin with. The app itself is just a little over 4MB in size. While downloading, it asks for permissions to know your identity (logged in/registered social media/mail accounts on device), location (GPS/saved locations), phone (for calling helpline/merchants from within the app), photos/media/files (for sending over relevant photograph of the product you need assistance with), camera (for the same purpose as previous), and internet/wifi connectivity access (obviously).

While Goodservice does ask for access to logged-in accounts, it does not store any password, or post anything anywhere. The access is taken so that you can directly share the app via social media platforms. Currently, sharing options include WhatsApp, Messaging, Gmail, Facebook, Hangouts and Twitter. Every other permission, too, seems legit, and there is no misuse of access that Goodservice gets on your device. Opening the app for the first time will show a page, where you’ve to put in your name, cellphone number, and locality. As of now, services are only available in Delhi and Gurgaon, with the next expansion plans featuring Mumbai and Bengaluru. There is no option for Facebook sign-in, and neither is there any verification process to cross-check your identity. This is one security flaw that Goodservice needs to address, to ensure that no fraudulent transactions or activities occur over it. 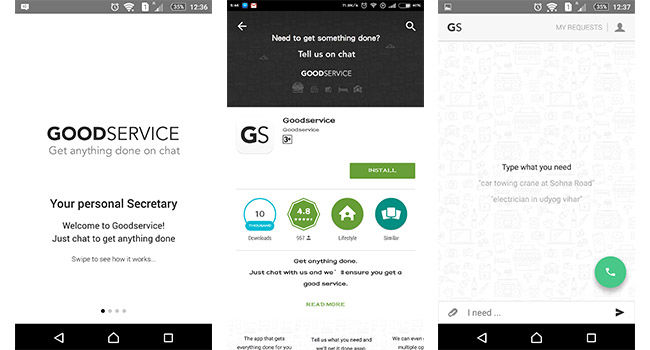 The welcome screen, Play Store profile and the Home screen of the app

Logging in, the chat window opens, where you can post your orders and queries. This is the app’s home screen, and opening it any time leads directly to the chat screen. The top-left corner of the screen has the Goodservice logo, while the top-right features ‘My Requests’, ‘Invite’ tabs and the Profile button. In your profile, you can add your home and work addresses to avoid having to send location details every time you place a request for anything. The chat window has a faded, doodled background, thus not keeping the app’s look completely bland. The bottom-right of the chat screen has a call button that you can use to call the Goodservice helpline (+919696444444) regarding any opinion or query. The bottom bar has an ‘Insert Photo’ icon, text area and a send button. The layout is really easy to use. Sent messages are delivered in turquoise green baubles with rounded edges, while replies from Goodservice’s end comes in white ones. You can simply start keying in your requests, like “I need a good suit tailor in my vicinity”, or “need agent to get my visa for China done ASAP”, and you will get an instant reply from Goodservice, asking for more relevant details. Once you’ve given all such details, your request is saved with a name, under ‘My Requests’. For instance, for queries mentioned above, they will get saved like “nearby suit tailors” and “visa agents”. These tabs are essentially shortcuts, which, if you need in future, can be opened, and it will take you back to the query which you may have made a long time ago. Without creating a separate file for old requests and keeping everything local on the same chat page, Goodservice saves the amount of space taken up on the phone, and even loads faster as the entire chat history remains on one page.

Orders and requests, once made, will be tagged as ‘processing’, and turns to ‘solved’ after the job is done for you. Goodservice is now in process of releasing updates that will give real-time order status, like ‘processing’, ‘order placed’, ‘service en route’ and ‘solved’. In the meantime, if you have further queries, you can simply put it in via the same chat window, or alternatively, call the hotline, which provides fast updates and answers. The helpline also aids in consumer fulfilment, and users can call in to state urgent complaints regarding the food that was delivered, or the likes. The visa enquiry: Keying in the request, responses and shared contact

The quality of the responses are good, although every now and then there is the occasional typo, which actually didn’t seem as criminal as it often seems in text messages. With so many digitized assistants around, it feels good to come across an app which, even after using automation widely to synchronise requests, retains the human touch. These responses will provide you with the ‘best’ option that Goodservice has, across varied services. The first reply, in more than a month’s usage that I have seen, never took more than 15-20 seconds. Another good aspect of Goodservice is that it tries its best to match time limits of queries that it sends, and till date, for most cases, final and effective responses have come within time. 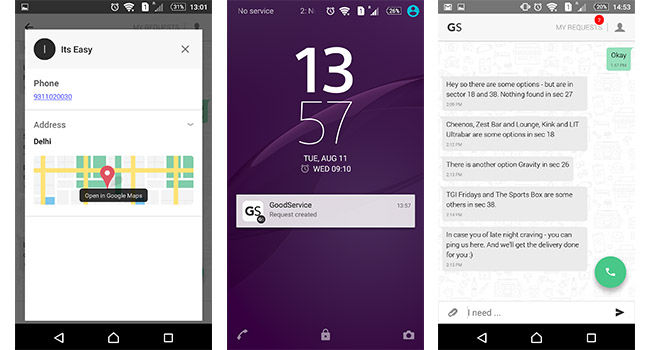 The merchants that it has so far redirected to, have also been good. And this has ranged from finding tailors, visa agents, event managers, housing ideas and late night food joints. Services have come on time, response from the merchants are spontaneous, and have also been available post completion of delivery of a service. For food delivery, you can ask Goodservice to keep sharing restaurant options with you, until you happen to like one. It also shares menu prices, and takes/cancels orders for you. You can also scout for specific brand outlets, timings, product options and relevant inventories. 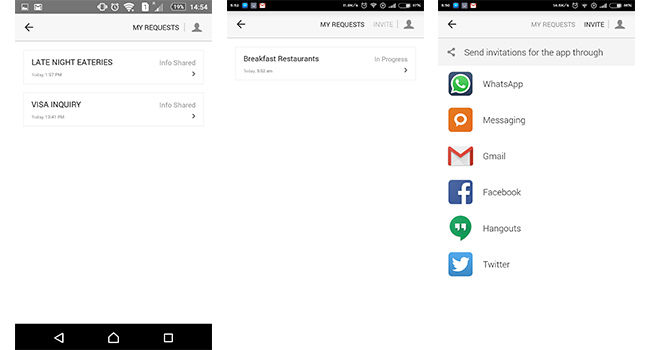 There is also an option to send photographs over chat, in cases like gadget repair requests, which are usually aided by a visual representation of the device that you want fixed. It helps the folks at Goodservice to find the perfect mechanic for you. The lack of an online payment option, till now, is possibly one of the two major setbacks in the app (the first being the lack of number verification). However, PayTM support is being added to it very soon, so I expect that issue to be covered. Goodservice has also given us some light over its plans on a number verification process, so that too, seems to be in progress. An app for Windows device users, however, is not exactly on the cards right now. 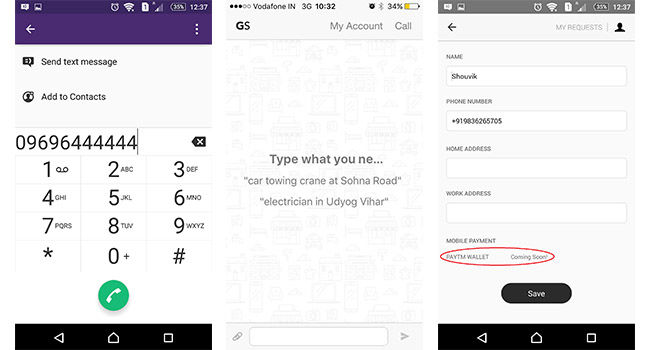 The iOS app, sized at 12.6MB, is currently in Beta stage, and is scheduled for release soon. Similar in functioning, the iOS app for Goodservice has some refining to do in terms of layout and design, and is yet to add the Invite tab. Nonetheless, it seems to carry out its basic work just fine, and I did not experience any app crashes, although there does seem to be a couple of bugs surrounding it.

How does Goodservice function?
Goodservice is a free app, and there is no payment involved from a user’s end towards Goodservice. The app has recently received $1.6 million as investment by American Venture Capital firm, Sequoia Capital. Additionally, it ties up with smaller, localised merchants like electrical stores, restaurants, etc., to provide prioritised services. For the larger e-commerce sites from where you might often want details/products, Goodservice directly accesses the sites to carry out requests on behalf of its customers.

There is a large extent of human interaction at Goodservice, since a large number of requests may involve informal/personal tones, which would generally take more time to be processed by an automated system. Having said that, it creates an inventory of requests, so that certain ‘most-asked-for’ requests can be processed by automatically-generated replies, which cuts down the human interaction part.

How does it remain free?
As mentioned above, Goodservice received a large amount of funding a few months ago. Additionally, with certain merchants that it is tying up with, there is a profit distribution scheme that it undertakes, although the user-end cost factor does not get affected. For instance, ordering from a restaurant that Goodservice has tied up with does not require you to pay anything above what is quoted on the restaurant’s menu chart. Goodservice is also banking on a growing number of users to keep its service response up.

Bottomline
Goodservice is simple, seamless. There are still a number of loopholes, which its Co-Founder Vipul Aggarwal has said are surely going to be covered in the next few upcoming updates. As of now, the service assistance is fast, the variety of services on offer is extensive, and you get reasonably cheerful, responsive human replies to your queries and requests - well, as cheerful as they can get at odd hours like 3:30am. The chat-based format and widespread availability of internet connectivity goes hand-in-hand with Goodservice’s policy of providing assistance via texts, rather than calling. Services are still expanding to other platforms and even more are being added, and with that, Goodservice is surely one of the must-have apps now.