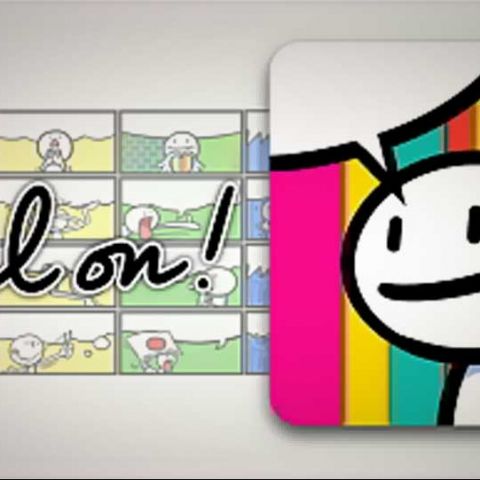 The quaintly-named Feel On! for Twitter converts your Twitter timeline into a comic strip, going one step ahead of apps that convert news into flippable magazines. Now, if that does not make it worth a download, nothing will.

There is a storm brewing over Twitter in the country at the moment, with some people calling it a cauldron of hatred and a threat to national security while others hail it as a tool of freedom of expression. No, we are not going to get into that debate here, but the time does seem appropriate to point out a Twitter app that will ensure you smile every time you see your Twitter Timeline. Feel On! for Twitter (yes, it is actually called that) is a Twitter app unlike any other - it simply tries to convert your Twitter timeline into a cartoon strips.

Feel On! for Twitter is a light enough download at 1.6MB and installed without any hassle on our Xperia S (read our review) and Xoom (read our review) (it works with all devices running Android 2.1 and above). After launching it and granting it the requisite permissions to access Twitter, do be a bit patient as the app “cartoonises” you timeline. Your patience will be rewarded with the most unusual looking Twitter timelines around - all your tweets and those made by the ones you follow will be displayed along with Zoozoo-like cartoon characters who try to emote what each tweet says. In essence, your timeline looks right out of a comic book with each tweet being a separate picture frame. 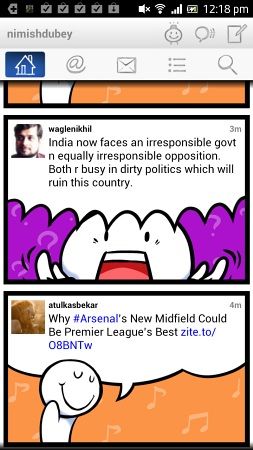 Yes, that is a Twitter timeline - cartoonified by Feel On. Every tweet gets a cartoon of its own.

The developers say that a “Special Emotion Engine” works out which cartoon to place with which tweet, but from what we could see cartoons got slotted according to key words and phrases in a tweet. So if your tweet has the word “love” in it, it is a fair chance that the cartoon that will accompany it will be that of a character looking a tad lovesick, while if there is a word that is of a slightly sad nature, the cartoon character will look a tad more depressed, and so on. No, it does not work smoothly always, and many is the time when the cartoon seems strikingly appropriate for the tweet accompanying it, but there is no denying that we have never seen our timeline being this entertaining. 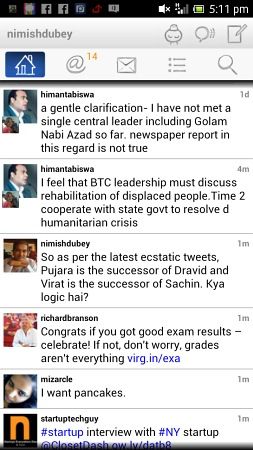 Mind you, there is more to the app than just an entertaining coat of paint over your Twitter feed. You can do most of your regular Twitter functions from within the app. You can compose new tweets, send direct messages, retweet them, mark them as favourites and view the profiles of people. All these options have been shown with cartoonish icons on individual tweet screens, along with related tweets on the subject. And if you get fed up of staring at cartoons, just shake your device to get a more normal “vanilla” view of your Twitter account. There is also an option to send a Tweet automatically by just touching a button - options include “No Way”, “So cute,” “seriously?” and, “No Kidding” and “Like!!”. Alternatively, just open a tweet you wish to respond to - and shake the device to send a “No way” response right away. While composing a tweet you can opt to choose a character that you think goes best with your tweet, in which case, those viewing it on other twitter clients, will see the cartoon as an attached image. And yes, you can also post to Facebook from within the app, although we could not see any way of seeing our Facebook timeline as a series of cartoons. We also could not see features like trending tweets or recommended people to follow, which kind of limits it for power Twitter users. 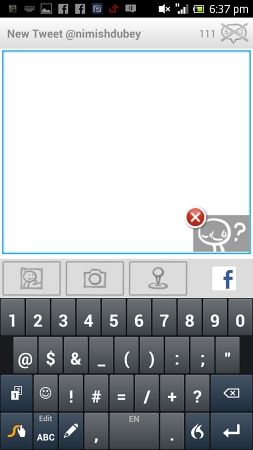 You can also use the app for normal stuff like composing tweets.

But then, this is not really an app for the hardcore tweeting crowd. The biggest strength of Feel On! for Twitter is the fact that it literally presents Twitter in a new - and amusing - light to you. Some people might scoff at it and call it trivial but we think it really shows Twitter in better light than most of the apps representing it. Simply because it makes you smile - even when you are looking at a potentially offensive tweet. You are unlikely to take anything on Twitter too seriously after using Feel On!

Of course, you can add cartoons to normal stuff - there is a wide variety of cartoons to choose from

But then, given all the brouhaha over the micro-blogging service, perhaps that is the best way of taking it. We are unlikely to be using Feel On! for Twitter as our main Twitter app in its current avatar - it tends to stutter while updating sometimes and well, is not really fully-featured enough for our liking (we like to know trends and check out recommendations). But it is definitely going to be an app that we will be using more than once a day to check our Twitter timeline. Not just to know what’s happening. But to smile at it all.

You can also send a number of pre-composed responses to tweets, although not all of them are grammatically correct.