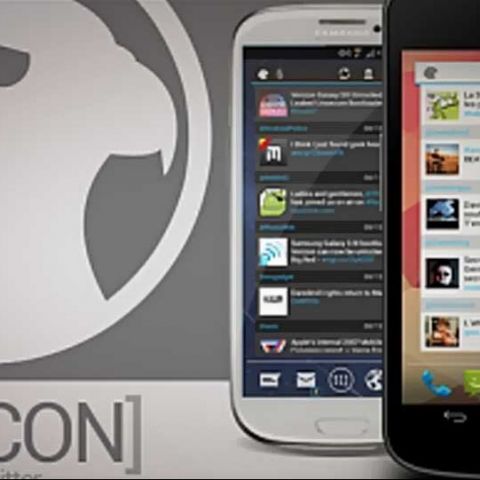 Falcon for Twitter may only be a widget, but it delivers a very good Twitter experience on the homescreen, complete with every function that you would want in a Twitter app. And it works fast too.

Twitter has been in the midst of wars of late, with a number of people attacking the micro-blogging network and others defending it, both with equal ferocity.

Like it or hate it, what cannot be denied is that Twitter is one of the most popular social networks in the world with millions of users. And one that has of course spawned a host of third-party Twitter apps, good and bad, which let you access the service on your handset. And one of the handiest that has come out in recent times is Falcon for Twitter (Beta).

First things first, Falcon is not an app in the strictest sense. It is a widget, which means that it remains on your homescreen and pulls information from your Twitter feed and displays it there. But what needs to be pointed out here is that this is no ordinary widget that just reflects what’s in your Twitter account. If anything, it gives you near-complete Twitter functionality on your homescreen and that too at a rate of knots. 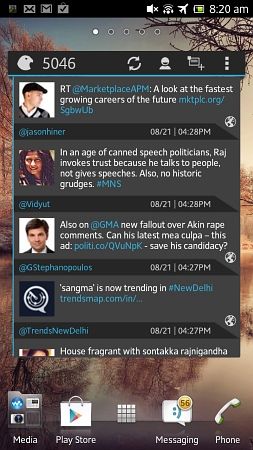 Falcon places a widget showing your Twitter timeline on your homescreen.

Falcon is a relatively small (1.4 MB) free download from Google Play. It might not show up in your list of widgets immediately after you download and install it - something that can be fixed by a simple reboot of your device. It can be installed on any of your device’s homescreens. Just remember that the widget will occupy an entire homescreen, so choose to place it on one that is not cluttered with shortcuts. That done, all you need to do is take the requisite permissions from Twitter (allow the widget to access it) and you are all set. Falcon takes some time to get underway when you first load it, but after that it is a very smooth ride. 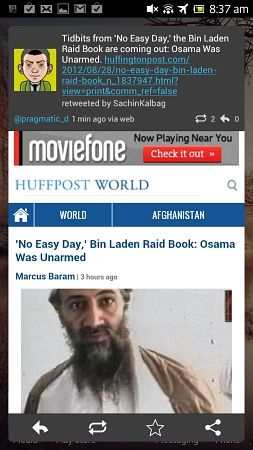 If a Tweet contains a link or a picture, it opens within the widget - no additional windows opened.

Falcon places your Twitter feed on your homescreen either in the form of a list of the latest tweets on your timeline or in a grid where the tweets are placed in a double column format. But unlike other widgets that restrict themselves to this view, there is more to come. You can tap on the person-like icon on the widget to see the tweets in which you have been mentioned, and send a new tweet or a direct message by hitting the plus icon. Pretty neat, but there is more. 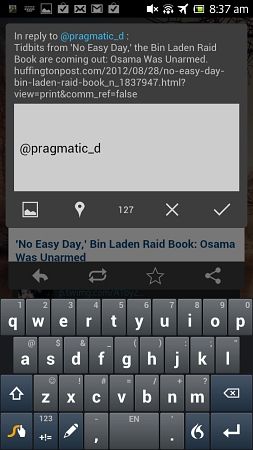 You can reply to tweets, retweet, mark favourites, send DMs, all from the widget.

One of Falcon’s most impressive features is that it lets you see the content of a tweeted link without leaving the widget - just tap on the tweet to get a larger view of it, with the shared link opened right below it. You can also tweak the settings of the widget to enable it to open a mobile-friendly version of a web page or open its full-fledged version on Wi-Fi. Shared images also open in the Tweet box. In fact, each tweet in Falcon comes with a little icon on its lower left corner, indicating that it contains a link, image of video. This being Android you can of course, go right ahead and share links and images and tweets across all your social networks and mail, if you feel so inclined. 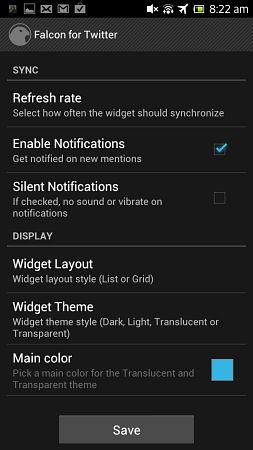 Complete profiles of people can also be viewed from within the widget. You can also resize the widget (a long press shows up resizing bars) and change its look and feel using themes and colours. Top that off with a notification system that shows the number of new tweets in the top left corner (you can set a refresh rate if you wish) and the option to access any Twitter client you have installed on your device by tapping the Falcon icon in the left corner and you are left with one very solid Twitter widget.

There are a few issues with Falcon though. In keeping with its beta status, it can be a little unstable and tends to crash about once in two days. And then there was this strange habit that the widget had of reloading images and links if we switched off the screen or even just retweeted the tweet containing the image or link. Surely it could have been cached? And yes, we really would have liked to be able to access our direct messages on Twitter - we could see no way of doing so on our Sony Xperia S, although we could compose direct messages from the compose box and also DM a person directly from their profile page - of course one can simply go to a Twitter client and check one’s direct messages, but after getting so much on the widget itself, one does not feel like leaving it.

Which sums up Falcon for Twitter for us. Yes, it is a beta and not quite the finished article yet, but it does more than enough to make it one of our favourite ways of accessing Twitter on our Android device. Definitely worth trying out if you are a Twitter addict on Android.