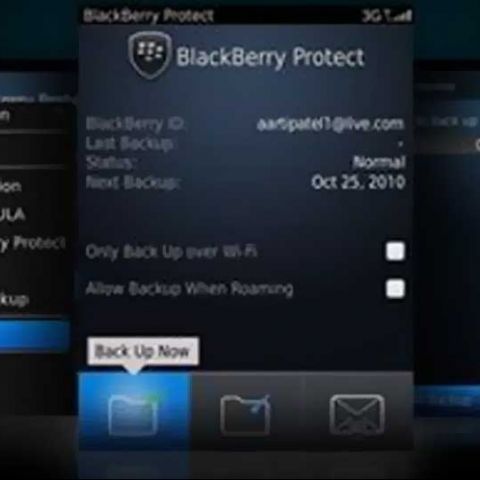 Blackberry Protect does well to backup your messages, contacts, calendars, tasks, memos and browser bookmarks. And also allows you track your misplaced Blackberry on the web browser. However, while the backup and restore service works very well, we arenï¿½t very certain the ï¿½track my phoneï¿½ service is very reliable. It never once was able to locate our phone, indoors or outdoors. We suggest using the Protect for backing up data, but not giving up on the desktop backup software just yet.

Blackberry was a tad late to arrive in the game. Apple iPhone users had the MobileMe(now the iCloud) service and Android users could back up contacts and other data to their Google account. Blackberry smartphones were conspicuously missing out on such a service. For a smartphone family that is targeted at the corporate users, the fact that this feature was not available was a bit of a surprise.

The Blackberry Protect app is being pushed quite aggressively by RIM- preloaded on new phones and prominent position on App World for older phones.

How to get it?
Well, there are two ways. Either download from the Blackberry App World, or wait for the Blackberry Protect logo to show up on your home screen, taking you automatically to the download page. The download size is just above 2MB, which isn’t much if you use the Wi-Fi or 3G to download, but will take a while on a GPRS/EDGE network.

Once downloaded, the Protect logo, which aptly looks like a shield, will be placed either on the apps menu list, or in the applications folder. You can place it anywhere you want to, anyway.

Interface
Typical Blackberry’s look and feel here, with the dark blue and black interface. On the first screen are the basic details the account you have linked this to (essentially, your Blackberry account), the date of the last backup was done on, the next backup scheduled date (depending on the duration you select), whether to back up only using a Wi-Fi network and whether to allow backup while on roaming.

Below this information are three icons, which are backup, restore and status messages regarding the service.

Performance
The Blackberry Protect service can backup contacts, calendars, tasks, memos, browser bookmarks and text messages. However, these can be configured according to your requirement, as to whether you need to backup any of these or not.

Once everything is configured, click on backup, and the service will create a backup of everything you have selected, on to their server. The app will how the progress of the backup, and usually takes about 2 minutes to 10 minutes, depending on the amount of data which is being sent to the server (on the GPRS/EDGE network). The first backup does take about 5-7 minutes on a 3G network, but subsequent backups are much quicker.

Once this is done, you can head off to the URL http://www.blackberry.com/protectfrom the web browser and access the account there. Weirdly, you will not see a list of your contacts there, or access your messages and documents. Backup data from an Android phone to the Google account, and you can see contacts, and messages within the Gmail interface.

What the web service offers though are features like “ring misplaced phone”, detect lost phone and even send SMS to Blackberry device. The ring feature, when activated there, will turn your Blackberry’s profile to Loud, and emit a loud ring till you cancel the command from the phone. This is useful, if you have misplaced a phone under a tower of files, or in a bag full of stuff! The locate feature utilizes GPS to track a lost phone. However, a couple of issues here:one, the GPS feature on the phone has to remain switched on and two, it doesn’t work if the lost phone is currently inside a building. The third feature of sending a display message to the Blackberry works well, but cannot really see the point of that service, unless you want to send messages to either yourself, or threaten someone who has stolen your phone!

Our Take
We strongly suggest you do regular data backups using the Blackberry Protect service. Why we say this is because in case you are restoring your phone because of a problem, and don’t necessarily have access to the PC with your phone’s data backup, the Restore service can be very helpful indeed. But then again, we suggest doing regular backups on the PC using the Blackberry Desktop app anyway.