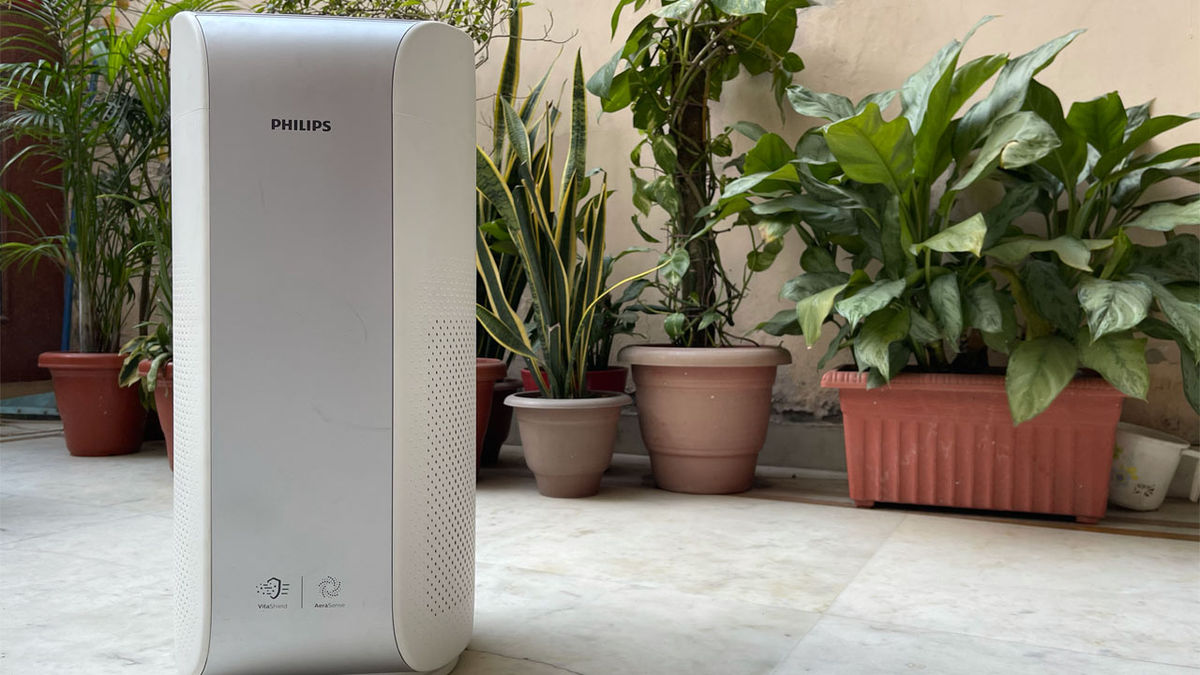 The Philips AC3059 is a surprisingly effective air purifier, having been tested at one of the worst times of the year with respect to air quality. While the official price is Rs 32,995, it can be had for as long as Rs 24,000 on various e-tailer platforms. The new design leans more towards minimal and functional. While the air cleaning capabilities of the Philips AC3059 make it a good recommendation, do note that it is an air purifier that can get very loud. So we recommend running it in your bedroom for an hour or so before going to bed so that when you do finally decide to retire, you can put it in quiet mode.

Irrespective of the time of the year, air purifiers have become a necessity. Sever pollution during winters, extreme dust during the summers and pollen during other times of the year make breathing an all-year-round challenge. Set up a good air quality monitor at home or in your car and you’ll know what I mean. Even on a day when breathing feels easy (relatively), the PM2.5 levels are far higher than the prescribed limit of 60 μg/m3. Prolonged exposure to anything higher can result in anything from mild annoyance to severe health problems with permanent consequences. There are many air purifiers out there it the market that claim to purify air, but we’re here to test just how well they do the job, and how long they take to do it. The first of the air purifiers in for testing is the Philips AC3059 Air Purifier.

The Philips AC3059 Air Purifier utilises a completely new design in comparison to what Philips had in the market up until last year. Instead of a rectangle, this year’s Philips AC3059 Air Purifier is a cylinder, pulling in air from the bottom and expelling it out the top. There is also a display and control panel embedded into the top, within a little circle. The design of this control panel is actually quote smart, with Philips packing in all the relevant controls, while taking up relatively little area. The power cord is hard-wired into the body and unfortunately, there are no wheels or carry-handles built into this thing. Moving it from one place to another in your home even will require you to pick it up, and good luck getting a solid, re-assuring grip on this otherwise smooth plastic cylinder. Thankfully, it isn’t very heavy and that’s coming from someone who refuses to lift weights at the gym. 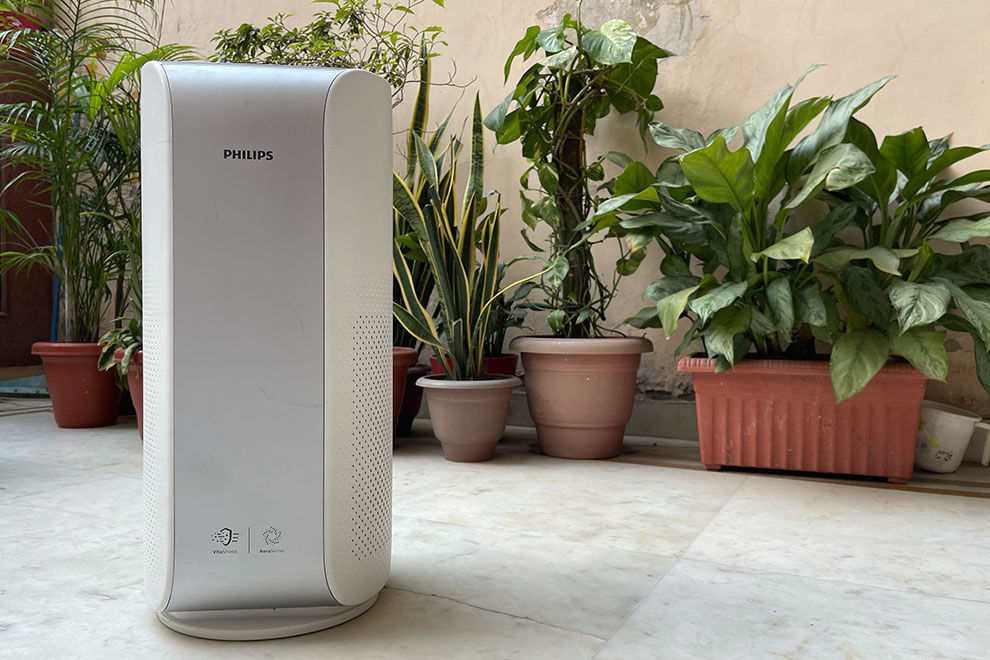 The Philips AC3059 Air Purifier does away with the older 2-filter rectangular combo for a singular 360-degree one. This filter houses both the HEPA filter and the activated carbon layer, which together come to remove not just particulate pollutants and also volatile organic compounds like formaldehyde, benzene fumes and more. While the 360-degree design is helpful in improving the amount of air being pulled in, the downside of a combined filter is that if one of the filters reach end of life, you’re going to have to replace the whole thing. There’s also a pre-filter in the form of the cover that goes to seal the filter into place, but in our testing, we didn’t find it to be very effective. Opening the bottom up to reveal the filter after 3 weeks of use revealed big bunches of dog and human hair stuck in the HEPA filter. Thankfully, HEPA filters get more effective once they’re a little clogged versus being brand new. 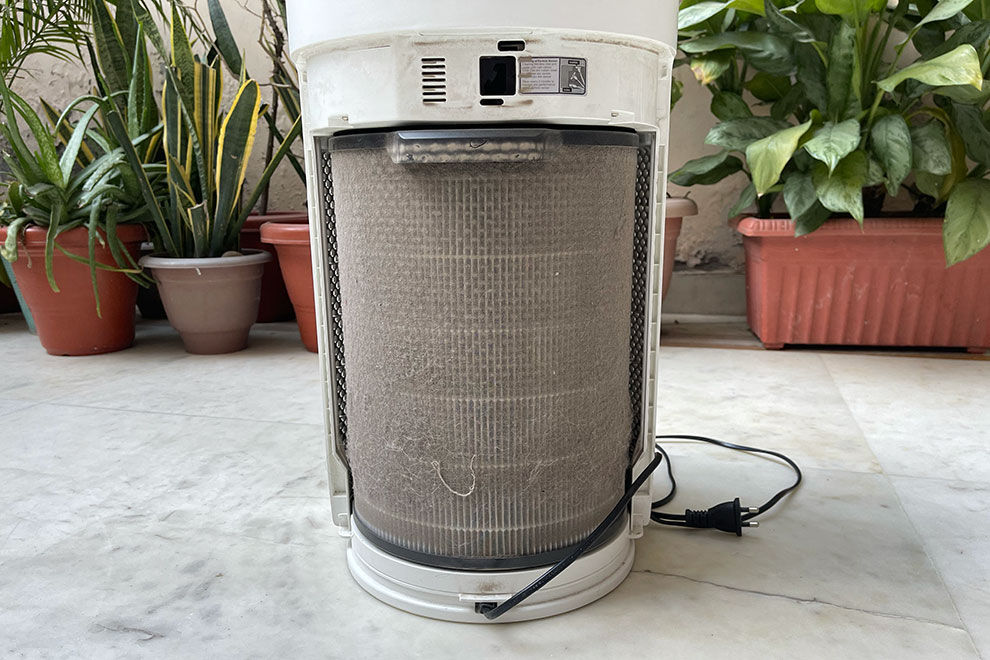 We tested the Philips AC3059 Air Purifier in three room sizes measuring 120square-feet, 160 square feet and a large 220 square-feet room. Ambient testing conditions were fairly poor, with high levels of pollutants all around, with the AQI maxed out at 500. In case you’re confused, here’s a little lesson on AQI. The Aire Quality Index is the result of a complex equation which factors in various pollutants, with different weightage assigned to each of them. Most countries define the AQI formula for themselves, and the one used by India caps the AQI at 500. In order to measure air quality, we use the Kaitera Sensedge, an industrial grade air quality monitor that delivers AQI number based on the Indian standard. To test the efficacy of any air purifier, it is placed in one corner of the room, with the Sensedge being placed in the diagonally opposite side. Here’s how the air purifier performed over the course of the house in the mid-sized room. 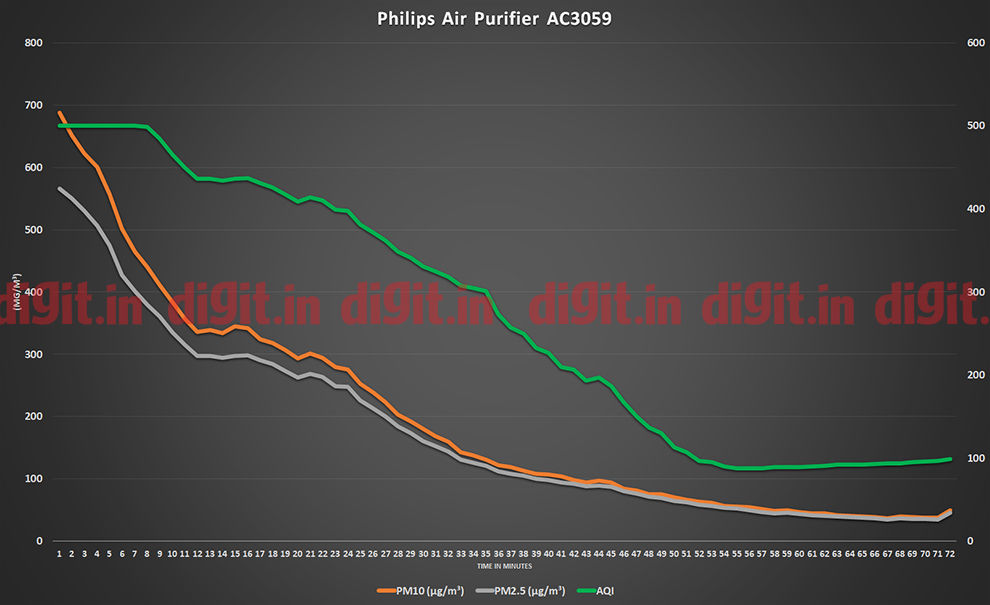 The Philips AC3059 Air Purifier when used in our smallest test room was definitely very effective, bringing the PM 2.5 levels into safe limits in roughly 20 minutes from starting. The largest room in the house, however, took much longer. In the even a door or window was cracked open, the small room was quickly cleansed again, however, even the smallest hint of a crack in the door severely slowed down the Philips AC3059 Air Purifier's progress in our largest test room.

The other interesting facet about using an air purifier is that as it turns out, you can’t use in a completely sealed room. The result of doing so would be serious CO2 build-up, resulting in sleepiness and lethargy. It is important to keep CO2 levels low, which means opening up the doors and windows periodically, which results in a spike of pollutants. In my case, I had the Philips AC3059 Air Purifier running all day and all night, and its most noticeable benefit was while sleeping.

The Philips AC3059 Air Purifier is a surprisingly effective air purifier, having been tested at one of the worst times of the year with respect to air quality. While the official price is Rs 32,995, it can be had for as little as Rs 24,000 on various e-tailer platforms. The new design leans more towards minimal and functional. While the air cleaning capabilities of the Philips AC3059 Air Purifier make it a good recommendation, do note that it is an air purifier that can get very loud. So we recommend running it in your bedroom for an hour or so before going to bed, so that when you do finally decide to retire, you can put it in quiet mode.