At the recently concluded IFA 2015 show in Berlin, we got some hands-on time on the soon-to-launch in India Moto X Play.

Design & Form factor -- The new Moto X Play isn't a tiny phone, as its screen measures 5.5-inch. One-handed operation was largely possible, and we didn't face any real problems during the short time we spent with the device. The phone's back has a rubberized pattern that helps conveniently while gripping it. The rubber finish feels nice on touch, too, and the curved back helps your grip while you're holding the new Moto X Play. If anything its volume rocker and screen lock button along the right edge felt a bit too thin to be honest.

The black version of the Moto X Play (with the piano finish) is glossy along its minimal edges, top and bottom screen bezel, attracting fingerprint smudges easily. The phone comes with a water repellent coating for added protection against liquid spills on the handset.

Screen – The Moto X Play sports a Full HD 1080p display with Corning Gorilla Glass 3 coating and 403ppi. Whether we played games on it, watched video clips or photos, the screen looked quite bright and managed to reproduce vibrant colors well.

Battery – One of the biggest highlights of the upcoming Moto X Play is its 3630 mAh battery capacity, offering the promise of not just all-day use off a single charge but up to a whopping two-day of battery backup despite uninhibited usage – while you play games, stay connected to cellular 3G / 4G data, etc. Tall claim indeed, something we will be testing for sure when we get the Moto X Play for review next week.

We didn't get to experience this at IFA 2015, but the Moto X Play comes bundled with a tiny charger with Motorola's Turbo Charge technology, allowing the Moto X Play to last for up to 8 hours with merely 15 minutes of charging!

Camera – The camera on the Moto X Play seemed snappy enough, as we clicked some shots on the IFA 2015 show floor. The 21MP rear camera has f/2.0 aperture accompanied by dual-LED flash. The autofocus on the Moto X Play's camera didn't feel slow. Burst mode photos seemed a bit out-of-focus, maybe because we tried shooting a crowded show floor that's constantly in flow. The rear cam can shoot jitter-free 1080p HD videos at 30 fps. The front 5MP camera is okay for selfies at best. 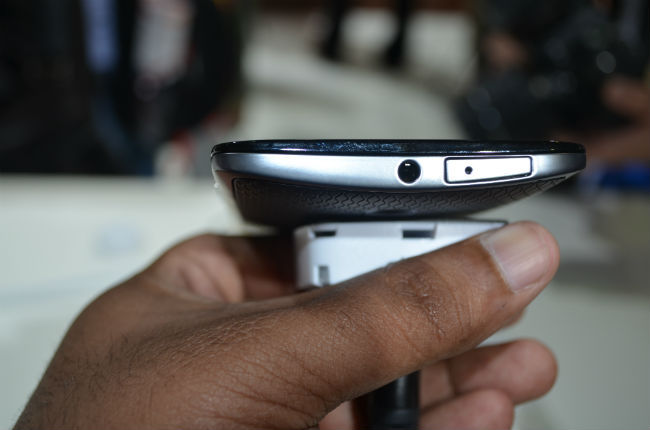 Performance – With a phone titled Play, the upcoming Moto X variant didn't disappoint while we tried our hand at gaming on it. Packed with a 1.7GHz Qualcomm Snapdragon 615 Octa-core SoC, Adreno 405 GPU and 2GB of RAM, we tried a couple of racing games that were pre-installed on the handset and didn't observe any obvious glitches or slow execution. However, until we've tested the Moto X Play ourselves, we will withhold our opinion about its overall performance.

After walking away from the Moto X Play demo booth at IFA 2015, we certainly felt that it was a good overall addition to the Moto family of handsets.

Moto X Play was launched in December 2016 & runs on Android 5.1.1 OS. The Smartphone is available only in one color i.e. default & provides a host of connectivity options in terms of 3G, 4G, GPS, NFC Bluetooth capabilities. The phone is available with 32 GB of internal storage.

The Smartphone is powered by 1.7 Ghz Octa core Qualcomm Snapdragon 615 Processor. A 2 GB of RAM ensures phone runs smoothly even the most memory intensive applications & still shows no signs of lag. 32 GB of internal storage can be expanded to 256 GB via a microSD card.

The Phone comes with a large 3630 mAh battery to support it's 5.5 inch screen with Full HD IPS LCD Capacitive touchscreen display having a resolution of 1080 x 1920 at 401 ppi.

Moto X Play comes with a 21 megapixel rear Camera and 5 megapixel front Camera. The Smartphone has a low camera aperture of 2.0.

top 10 Mobile Phones in this range

Motorola has announced its 2021 lineup of Moto G Stylus,...

Oppo X Tom Ford has been revealed in patent pictures...

The Motorola Moto G9 Power has officially launched in India after...

The Moto G9 Power is confirmed to launch on December...