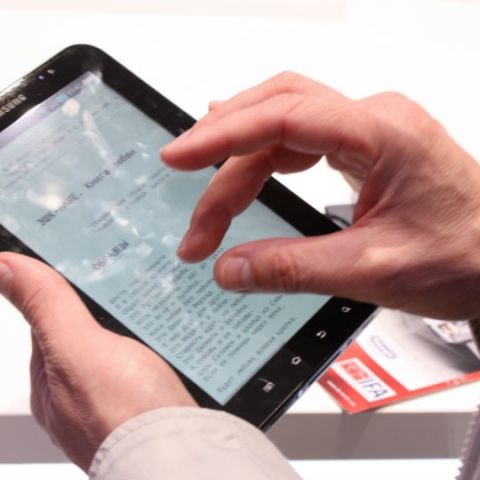 Tablet shipments in India was 0.98 million units in Q2 2016 according to a report by IDC. The report also noted that this was a growth of 14.4 percent compared to Q1 2016, but a decline by 5.6 percent as compared to Q2 2015. IDC stated that about three-fourths of the tablets sold in India cost below $150 and were driven by vendors like Datawind, iBall, Micromax and Lenovo.

According to International Data Corporation (IDC), tablet shipments in India inclusive of slate and detachables was 0.98 Million units in CY Q2 2016. Shipments grew 14.4 percent in Q2 2016 over previous quarter, while dipped 5.6 percent over the same period last year. According to Karthik J, Senior Market Analyst, Client Devices, IDC India, “Tablet market declined as consumer market receded by 12.5 percent year-on-year in Q2 2016, while commercial segment continues to grow at a heathy rate indicating clear shift in the focus of the market”

Approximately three-fourth (3/4th) of tablets sold in India are below USD 150 and driven primarily by local vendors like Datawind, iBall and Micromax followed by Lenovo. Samsung dominate the mid USD 150-350 segment, while the premium USD 300+ continues to be dominated by Apple, driven primarily by its iPad Air 2. Also, premium end of detachable segment spiked in Q2 2016 owing to healthy shipments from Apple’s newly launched iPad Pro 9.7.

After the steady ramp since Q1 last year, detachable shipments dipped sequentially for the first time but managed to post healthy double digit year-on-year growth. “Detachables are seeing better uptake compared to convertibles owing to the reason that convertibles are relatively premium priced while detachables are able to effectively bridge the price and functionality gap between tablets and entry level notebooks. In addition to this, detachable offers the option of all three major operating system platforms to the users”, says Karthik J.

Datawind: Datawind maintained its top position with 27.5 percentage share in Q2 2016 with 14.1% growth over previous quarter. Vendor makes inroads into detachable category with android devices in sub USD 150. Datawind is likely to expand its channel and manufacturing capacity in response to sharp trajectory it has been seeing in the past year.

Samsung: Samsung sustained the second position with vendor share of 14.7 percentage in Q2 2016. Their shipments grew marginally over Q1 2015 while grew at a healthy 11% over previous quarter primarily driven by commercial segment.

iBall: iBall bounced back to take third place after successively declining since last two quarters. However, vendor shipments dip 9.4 percent in Q2 2016 over the same period last year. iBall begins local manufacturing of tablets towards the end of Q2 2016.

Lenovo: Lenovo slipped to fourth place with 11.2 percentage share in Q2 2016 as the shipments declined 6.2 percent over previous quarter. Q2 2016 shipments grew 60.8 percent over the same period last year as vendor’s focus has shifted from consumer to commercial segment.

Micromax: After declining for last two quarters, Micromax’s shipments recovered in Q2 2016 driven primarily by uptake in commercial segment. Micromax slipped to 5th position in Q2 2016 with vendor share for 10.9 percent. Vendor who is the key player in detachable segment had no contribution to the category in Q2 2016 as the channel was diluting existing inventory.

Tablet shipments are expected to grow sequentially in Q2 2016 to prepare the channel with enough inventory for soon approaching festive season.