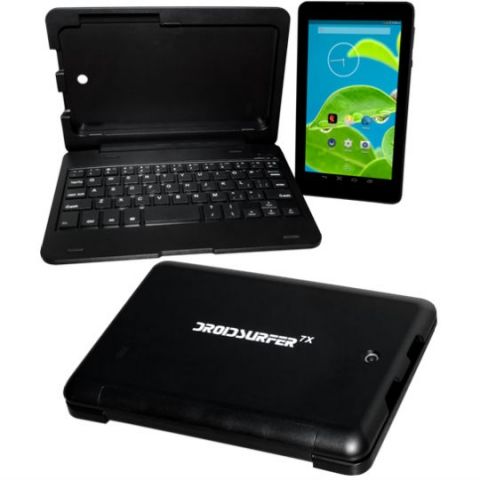 Expanding its leadership in the low cost internet connectivity and web access device segment, DataWind, maker of UbiSlateTablets, DroidSufer Netbooks and PocketSurfer Smartphones have expanded their portfolio with the introduction of its first detachable devices, the new Droidsurfer Netbooks 7DC+ & 3G7+ in India. The 2G Droidsurfer7DC+ is priced at INR 3,999 and 3G Droidsurfer3G7+ is priced at INR 4,999.

Commenting on the launch Mr. Suneet Singh Tuli, CEO DataWind, said,“The DroidSurfer Netbooks come with a sturdy detachable Bluetooth2-in-1 keyboard. With its classy slim look and strong functionality, this affordably priced Droid Surfer will surely be a game changerin theworld of technology.  These are the most affordable netbooks in the Indian market and they offer the extra benefit of acting both as a tablet and mini-laptop.”

These devices will be the perfect companion for people who want to stay connected while on the move. The DroidSurfer 7DC+ (2G)&3G7+ (3G) incorporatea 7 inch multi-touch projective capacitive screen, feature 0.3 MP front facing camera and 2 MP rear camera with the Android 4.4.2 operating System running on a  dual core Cortex A7 processor. In addition, they offer upto 32GB of expandable memory with features like Wifi Hotspot, Wifi Direct, Bluetooth and GPS on some models.

All DataWind internet connectivity products come bundled with the infinite power of the internet, at no additional cost!- on the Reliance Communications network. DataWind’s web delivery platform covered by 18 U.S. and international patents delivers fast and affordable  internet access. DataWind’s back-end cloud servers compress and accelerate the delivery of web content by a factor of up to 30x rendering a fast and rich desktop-like web experience even on traditional GPRS/EDGE mobile networks.

Mr. Suneet Singh Tuli, CEO DataWind, further added, “With access to billions of web pages, at no extra cost, users can take advantage of content for both education and entertainment. The web is the most powerful tool for commerce, allowing users to make travel bookings, purchase from ecommerce sites, promote their own businesses and conduct transactions. Communicate like never before through E-mail and social networking sites. DataWind’s low cost Internet-enabled products allow everyone to join the digital age. Introducing technologically advanced devices at the most affordable prices are our way of contributing to the Digital India Vision.”