Kingston has refreshes several memory card lines including the Canvas Go! Plus, Canvas React Plus and Canvas Select Plus series along with the MobileLite Plus card reader series

Kingston Technology, a world leader in memory products and technology solutions, announced today the refresh of its ‘Canvas’ series Flash cards to Canvas Plus. The new SD and microSD lineup include Kingston’s first UHS-II cards. To keep up with Canvas Plus, new MobileLite Plus UHS-II readers have been engineered to support blazing fast read speeds. Canvas Plus represents the next generation of SD and microSD cards with increased performance for DSLRs, 4K/8K video production, Android devices, action cams and drones. 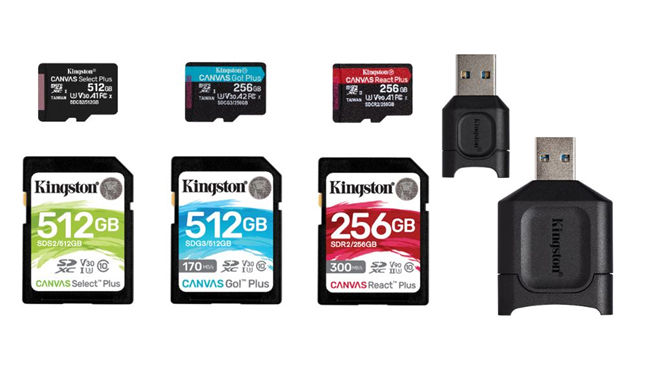 Canvas Plus offers three different variations for both SD and microSD cards: Select Plus, Go! Plus, and React Plus. Canvas Select Plus, which began shipping in Q4 2019, is joined by Canvas Go! Plus and Canvas React Plus. They support not only the latest advanced cameras that are capable of 4K and 8K video capture, React Plus and MobileLite Plus are also backwards compatible with UHS-I and conventional SD bus standards. MobileLite Plus readers will be available on their own or as a bundle with React Plus cards to ensure optimized speeds.

The Canvas Plus card series include:
Canvas Select Plus:

“Our goal is to deliver the best possible experience so consumers can share the content that’s important to them,” said Kingston. “Canvas cards lead the way with UHS-II and A2 app support and are durable, feature great storage capacity and are higher in speed to capture all of life’s memories without the worry of space limitations or long transfer times.”
Canvas Plus Flash cards series are exclusively available on Tata Cliq from October 17. The Canvas cards are backed by a lifetime warranty, free technical support and legendary Kingston reliability.