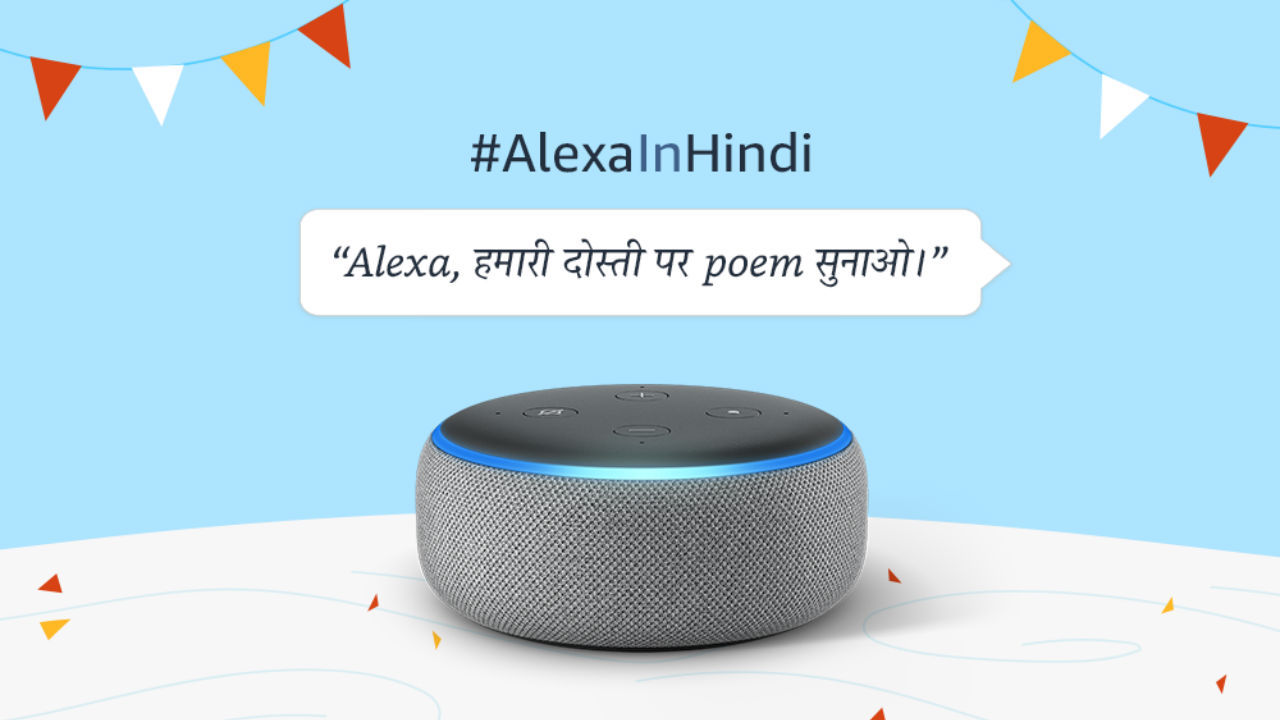 Amazon has announced that users will be able to converse with Alexa in Hindi on their Android and iOS smartphones. This can be turned on by heading into their phone’s settings, selecting ‘Alexa on this phone’ and then select the Hindi language.

Alexa in Hindi is now available to millions of smartphone users in India. Starting now, customers can interact with Alexa in Hindi on their Android or iOS smart phones using the Alexa app. Open the Alexa app, visit settings >> Alexa on this phone >> and select 'हिंदी' from available languages. This announcement comes on the first anniversary of Alexa’s Hindi support in India.

“India’s unique cultural and linguistic diversity has always inspired us to make Alexa more local and relevant for users in the country. Introducing Hindi made Alexa accessible to hundreds of millions of native Hindi speakers. We have made several improvements in Natural Language Understanding. For example, Alexa was not able to understand words like ‘dhai’ & ‘tham jaa’ in the beginning, but now she does.  Similarly, we will continue to make Alexa interactions in Hindi even more seamless and conversational. It is still Day 1,” said Puneesh Kumar, Country Leader for Alexa, Amazon India.

Alexa continues to get smarter with new features

In an effort to make Alexa in Hindi more useful for customers, Amazon has added over 60 new features in the past year. These include improvements such as asking Alexa to whisper, adjust how fast or slow she speaks, and new experiences such as asking Alexa for health-related information powered by myUpchar.com, mimic Bollywood dialogues by the name of actors/ actresses and so on.

The Alexa Natural Language Understanding (NLU) team has driven numerous initiatives towards algorithmic improvement of Alexa’s understanding of Hindi. A large part of the capability is driven through machine learning and artificial intelligence techniques. Alexa is now equipped with hundreds of new words from the Hindi vocabulary, and is also able to understand different ways in which customers can ask for the same information. Such initiatives led to a 30% improvement in NLU accuracy. E.x. Alexa can support a wide range of requests such as “Alexa, mere orders dikhao”, “Alexa, mera samaan ka update kya hai?”, “Alexa, meri samagri kitni door hai?“ and “Alexa, mera package kab milega?”.

Each day, Alexa gets hundreds of thousands of requests in Hindi and Hinglish.  Popular requests in Hindi include the convenience of using voice to play music, ask questions, read the news, set timers and alarms, check the calendar, provide sports scores, control lights at home, watch videos on Echo devices with screen and much more. At least one customer says "I love you" to Alexa every minute. Alexa also gets at least one marriage proposal ex. “Mujse shaadi karogi?” each minute.

In the last 12 months, hundreds of Indian brands and developers made Alexa skills with a Hindi flavour. At launch last year,  Amazon had over 500 Hindi skills which included GaneshaSpeaks, All India Radio, RedFM,  Sanjeev Kapoor Recipes, Art of Living, Sadhguru, and Amar Chitra Katha. Today, there are over 1000 Hindi Skills. These include Audible Suno, Ramayan Katha, Devotional Stories by Hungama, Shilpa Shetty Yoga, Jungle Safari, Kabir's Dohe, Rekhta, Hindi Jokes and so on.

Alexa in Hindi can be experienced on the entire Amazon Echo range of smart speakers, Alexa built-in devices by other brands. Just say “Alexa, Hindi mei baat karo” to get started. To interact with Alexa in Hindi on your smart phone, just changed the language setting inside the Alexa app to Hindi.