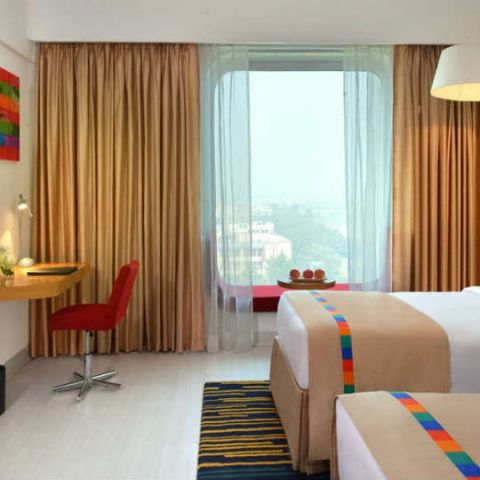 Park Inn by Radisson IP Extension is set to transform the Indian hospitality industry with the launch of its voice assistant-enabled smart hotel rooms. The property features the world’s first hotel rooms to have a complete automation of service requests and virtual control of TV & lighting fixtures.

Six of the property’s spacious studio rooms have been fitted with Amazon’s AI-powered Echo Dot devices. This allows guests to control light settings, music played in the room, and even the television with simple voice commands. Additionally, guests can now request for services such as room cleaning, wake-up calls, laundry, in-room dining, and room check-out by merely speaking to the smart device.

Alternately, guests can manage basic room functions & service requests with just a tap of their personal mobile phones; without downloading any apps. Park Inn by Radisson IP Extension, New Delhi is the first property in the world to provide this app-free solution, with Web RTC technology.

Saurav Dutta, General Manager, Park Inn by Radisson IP Extension said, “Internet of Things (IoT) & voice-enabled technologies are without a doubt the future and we are excited to pioneer these comprehensive & intuitive smart hotel room features in India. With the voice-activated in-room solutions we expect a 50 percent improvement in housekeeping efficiencies; ensuring speedier completion of service requests. Eventually, the intent is to diversify & grow the connected room features, as part of our on-going efforts to offer bespoke experiences that evolve with the needs of our patrons.”

Once checked-in, guests can use their mobile devices to play videos and listen to music, such as Amazon Prime Video, Netflix, and YouTube; beamed onto the TV set. For a limited-period, complimentary in-room subscriptions to Amazon Prime Video are also on offer. The guests’ mobile can also be used as a remote control for the television and set-top box. What’s more, their phones can double as a keyboard and mouse, turning the TV screen into a computer interface.

The studio rooms integrated with this new technology have been configured by Kamakshi Clouds, a Bangalore based software firm.

M. A. Kannan, Director, Kamakshi Clouds said, “Almost every industry in the world is on the cusp of an Artificial Intelligence (AI) revolution, with a promise of improved efficiencies. Therefore, it is time for hotel businesses to embrace this change with great dexterity; as the sector contributes extensively to India’s GDP. Web RTC, used to power the smart rooms at Park Inn by Radisson IP Extension, is a highly disruptive technology that allows guests to turn on/off lights  & the TV with just one tap.”

The smart studio rooms had been under intensive beta testing, for the last seven months, prior to its preliminary rollout in January 2018. The hotel plans to expand the AI services, to other rooms, after careful review of guest preferences in the days to come.