Fujifilm has announced the addition of the “FUJIFILM X-T200” (X-T200) to the lineup of the X-Series. 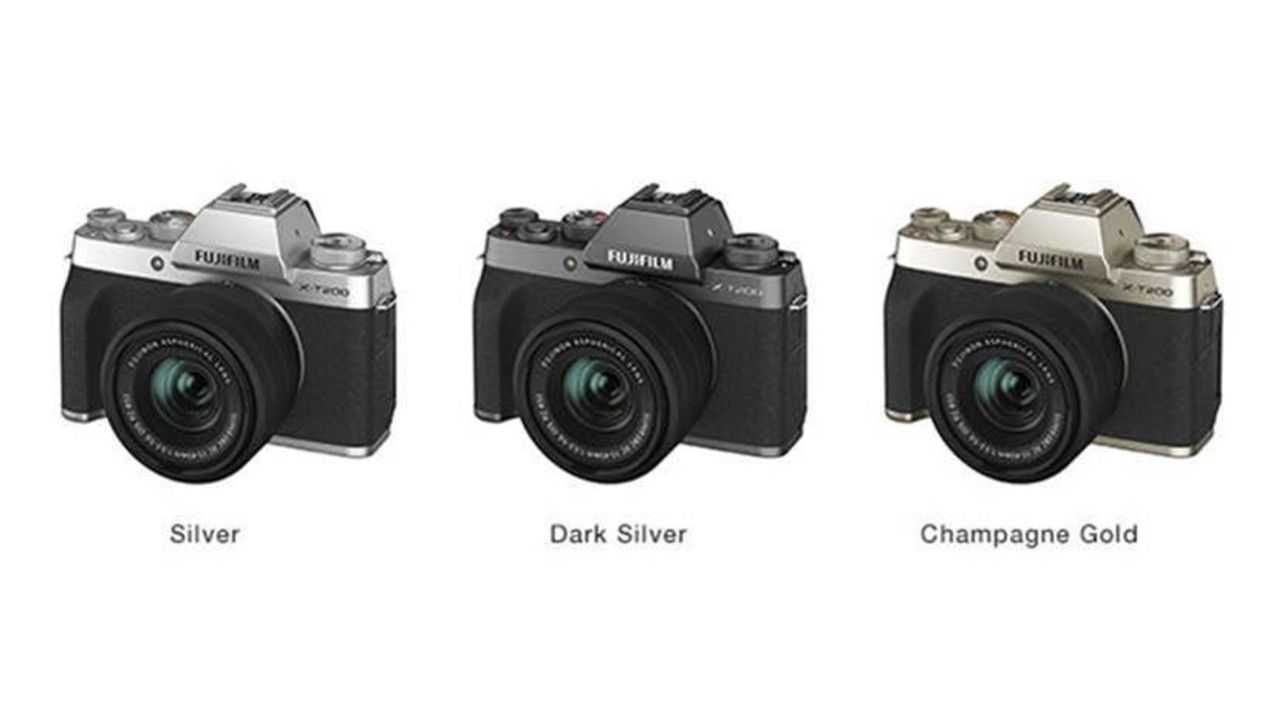 Fujifilm has announced the addition of the “FUJIFILM X-T200” (X-T200) to the lineup of the X-Series. The X-T200 is a mirrorless digital camera that inherits the “central viewfinder style,” adopted by the popular X-T Series.

Fujifilm India Private Limited, a pioneer in imaging technologies, is pleased to announce the addition of the “FUJIFILM X-T200” (X-T200) to the lineup of the X-Series. This new variant adds another beast to the Fujifilm compact and lightweight mirrorless digital cameras that delivers outstanding image quality with Fujifilm's proprietary color reproduction technology.

The X-T200 is a mirrorless digital camera that inherits the “central viewfinder style,” adopted by the popular X-T Series such as the FUJIFILM X-T3 that boasts advanced mobility and excellent operability. The new entrant is designed in a compact body with a better grip, weighing just 370g* and comes with an APS-C sensor packing 24.24 million pixels and a high-performance image processing engine. Its 3.5 inch LCD monitor also comes with touch operation and upgraded still features with faster and more precise auto-focus. In addition, the camera offers upgraded video recording features that results in improved Full HD resolution and high-speed recording.

The use of the unique color reproduction technology, nurtured over many years, recreates “memory colors” or colors as one remembers in one's memory, such as naturally beautiful skin tones, vivid lush greens of early summer and deep blues of the sky on a bright sunny day. The camera's AF performance has been enhanced by placing on-sensor phase detection pixels across the sensor and adopting a further evolved algorithm. This enables outstanding AF tracking of a moving subject and AF on faces / eyes, as well as giving the ability to attain focus quickly and accurately even in low light conditions.

On the rear panel of the camera body is a bright and large widescreen LCD monitor that provides intuitive touchscreen operations. It has a “vari-angle” structure that allows users to adjust the monitor to any angle. It can be used in conjunction with the Face / Eye AF for easy “self-portraits,” adding to excellent operability. The camera extended the array of video functions so that users can record smooth 4K video at 30fps or HDR movie providing expanded tonal range even in situations with significant contrast in light levels.

Commenting on the launch, Mr. Haruto Iwata, Managing Director, Fujifilm India Pvt Ltd. said, “The camera industry in India is dynamic and we have witnessed a significant consumption of 4K cameras from the professional segment. Catering to the consumption patterns of the photographers, X-T200, not only offers a novel photography experience to the end users, but also brings the imaging industry to new heights in terms of product design. With this new edition’s incredible image quality, one can capture their beautiful everyday moments and make the most out of them while expressing one’s memories. We are confident that our latest offering will cater to the growing list of professional photographers in India and open up newer possibilities in the imaging space.”

Keeping in mind the changing preferences of consumers, the X-T200 puts professional-level features at the fingertips of creatives, giving them a new light-weight and compact mirrorless camera body that enables a high resolution EVF, quick and accurate face-detection AF, the power to create 24.2MP stills at 8 FPS, and even the ability to record 4K UHD video. With this technology, the videos can be shot from almost any angle with its widescreen vari-angle LCD Touch Screen.

The X-T200 is a mirrorless digital camera capable of producing not only premium-quality photos but also full-fledged video, catering to the needs of photography enthusiasts and users who want to step up from smartphone cameras, trying to capture and record precious memories with ease and in high image quality.

Fujifilm will continue to evolve the X Series including the X-T200, the GFX Series of mirrorless digital cameras incorporating with large format** sensors and their extensive lens lineups to deliver the joy of photography.

*Including the supplied battery and a memory card
**An image sensor measuring 55mm diagonally (43.8mm x 32.9mm), with the area approximately 1.7 times that of a 35mm sensor

The camera is now available all over India at the below mentioned price:

·       The 370g compact and lightweight body, some 80g lighter than the previous model***, contains a 24.24MP APS-C sensor and a high-performance image processing engine. The use of the unique color reproduction technology, nurtured over 80 years, recreates “memory colors” or colors as one remembers in one's memory, such as naturally beautiful skin tones, vivid lush greens of early summer and deep blues of the sky on a bright sunny day

·       The camera's AF performance has been enhanced by placing on-sensor phase detection pixels across the sensor and adopting a further evolved algorithm. This enables outstanding AF tracking of a moving subject and AF on faces / eyes, as well as giving the ability to attain focus quickly and accurately even in low light conditions. The camera also offers a variety of automatic functions including the Advanced SR Auto, which automatically selects the optimum shooting settings according to given scenes such as portrait, landscape and night scape, so that the users can take high-quality pictures with ease

·       The sensor uses copper wiring to make the speed of data readout 3.5 times faster than that of the previous model***, thereby significantly reducing the rolling shutter effect*4

·       The camera boasts continuous shooting of 8fps. It is combined with the fast and accurate AF capability to capture a decisive photo moment.

·       The X-T200 features a 3.5-inch widescreen LDC monitor with the aspect ratio of 16:9, offering the touch response performance equivalent to or greater than smartphones in general to enable intuitive operations. Shooting settings can be easily adjusted with touchscreen operations while users visually check exposure and the degree of bokeh on the screen

·       The monitor has a high level of clear visibility thanks to its maximum luminous intensity of approximately 1,000 candelas, double the brightness of the previous model's*** monitor, displaying the subject clearly even on a bright sunny day outdoors The monitor has a “vari-angle” structure that allows users to adjust the monitor to any angles,  facilitating photo shooting from low and high angles. It can also be flipped for easy “self-portraits” in conjunction with the Face / Eye AF

·       The use of the easy-to-hold grip design ensures that the camera sits comfortably in one's hand. It remains stable even when mounted with a large telephoto zoom lens for photo shooting

·       The X-T200 offers 11 variations of Fujifilm's unique Film Simulation Modes including Velvia and PROVIA, making it possible to choose from different color tones and expressions according to the subject or scene as if users are opting to use different photographic film

·       “Clarity Filter” has been added to bring the total number of Advanced Filters to 20, adding advanced artistic flair to images to expand the scope of one's photographic expressions

·       The X-T200 has a built-in pop-up flash, integrally designed into the viewfinder section. The camera automatically controls light output according to each scene and distance to the subject, so as to prevent highlight clipping for a natural presentation of the subject in flash photography

·       The X-T200 reads data from all the pixels on the sensor and uses the ample information equivalent to 6K to produce 4K video, resulting in low-noise and premium-quality footage

·       The camera records smooth 4K video without cropping at 30fps, or even smoother video at 60fps in the Full-HD and HD video modes

·       Full-HD video can be recorded at the rate of 120fps, providing smooth video even in slow-motion replay of a fast moving subject

·       It will be the first Fujifilm digital camera to feature the Digital Gimbal Mode. It uses gyro sensors to accurately detect even the slightest of vibrations to control camera shakes during video recording.

·       The “Cut & Edit” function has been newly added to trim recorded video. This shortens the duration of video replay and reduces data size, making it easier to post video on social media or share it with family and friends

The “FUJINON Lens XC35mmF2,” to be released at the same time as the X-T200, is a compact standard lens with the maximum aperture of F2.0 and the focal length of 35mm, weighing just 130g and measuring 46.5mm. Its fast and silent AF capability, and its exceptional portability allow the users to enjoy a light-footed shooting style.