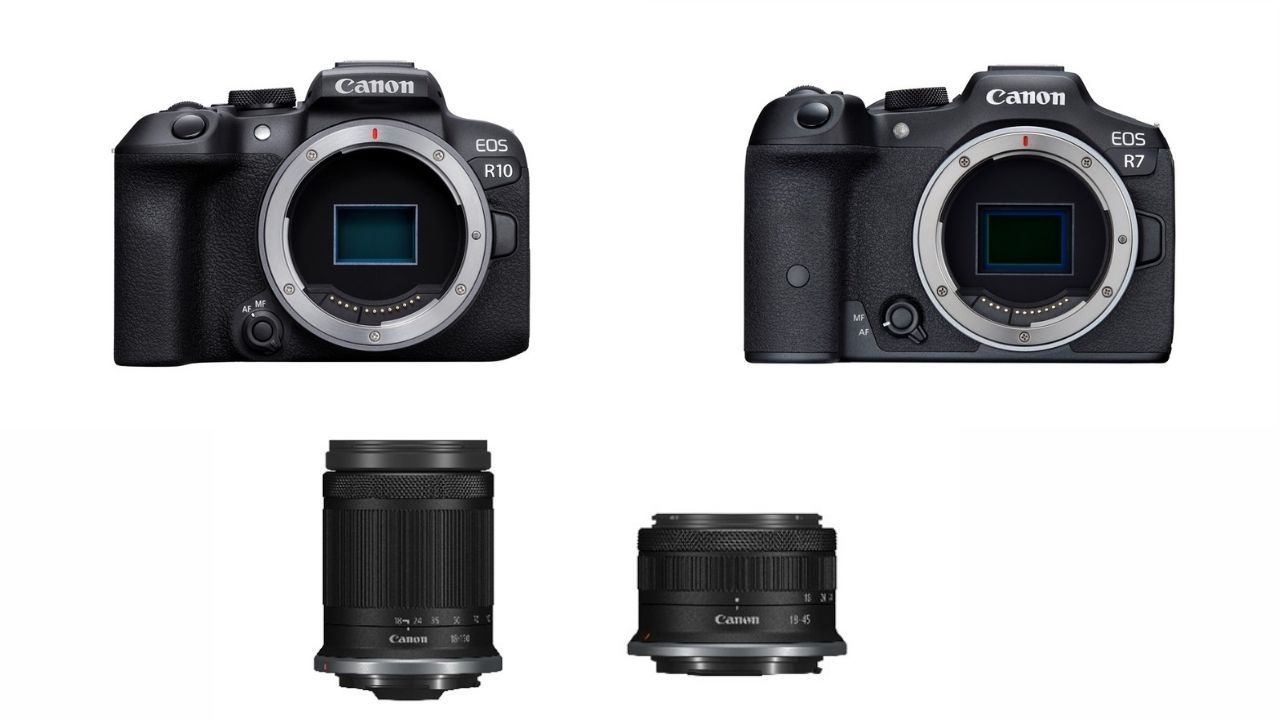 Canon today announced the launch of the EOS R7 and the EOS R10, its first cameras in the EOS R mirrorless system to be equipped with APS-C image sensors.

Designed for more experienced users who require a fast camera to photograph dynamic subjects such as sports and wildlife, the high-performance 32.5-megapixel EOS R7 features In-Body Image Stabilization (In-Body IS), weather-sealing, and dual SD card slots. The 24.2-megapixel EOS R10, which features a built-in flash and a smaller form factor, is designed for more standard everyday needs. Launched alongside the two cameras are the RF-S18-45MM F4.5-6.3 IS STM and RF-S18-150MM F3.5-6.3 IS STM, two new lenses built to fully optimise the mobility advantages of the new APS-C cameras.

Commenting on the launch, Mr. Manabu Yamazaki, President and CEO, Canon India, said, “As the passion for content creation keeps evolving amongst enthusiasts, it has been our consistent effort to bring them the latest technologies that not only enhance their photography and videography experience but also allow them to innovate and experiment with the content they create. As a leading imaging brand, we are all set to create new benchmarks in content creation by extending EOS R System in the APS-C sensor segment with the launch of the innovative EOS R7 and EOS R10. With this launch, we aim to address the need of the community to have a camera which bridges the functionality offered by EOS R System mirrorless cameras but with the affordability quotient. These exemplary and most advanced cameras to date offer creators functionalities such as speed to capture iconic moments, recording long and high-quality movie footages, unparallel focus, speed and precision and advanced communication functionality.”

He further adds, “With the market returning to pre covid times and content creation seeing even more traction this year, it is indeed an opportune time for adding these two new flagship products in our diverse portfolio for the Indian market. We hope that the new products will enable enthusiasts to successfully capture and cherish all the unforgettable experiences that the world has to offer.”

Mr. C Sukumaran, Senior Director- Consumer Systems Products and Imaging Communication Business, Canon India added, “We are delighted to share the widely anticipated announcement of Canon’s EOS R System entering the APS-C Market. The EOS R7 and EOS R10 are exceptionally well poised to provide advanced AF performance and movie performance, encouraging users to take on the challenge of new photographic endeavours. The high-end EOS R7 boasts of high-speed performance ideal for advanced users focusing on shooting fast-moving objects and actions. It is also the perfect companion for content creators who seek to turn still picture shots into works of art with the right focus on image quality and AF for both still and video. Further, with the high-performance ability of the EOS R10, we aim to meet all diverse user needs while serving as an affordable entry-point into Canon’s EOS R system mirrorless technology. Its compact size, built-in popup-style flash and microphone make it the finest choice for vloggers and photo enthusiast. We are positive that these new products will be well-received by users in their defined niches, successfully elevating their photography and videography journey.”

Inheriting the AF technology of the EOS R3

Supported by the powerful DIGIC X image processing engine, the EOS R7 and EOS R10 are the first to inherit the new autofocusing (AF) technology that debuted on the EOS R3. This technology harnesses the deep learning-based subject detection capabilities of the EOS iTR AF X system – to track subjects more tenaciously across the entire image area, regardless of the AF area mode. This provides highly responsive and reliable autofocusing, even in dynamic scenes.

Both the EOS R7 and EOS R10 are capable of up to 15 fps high-speed continuous shooting in mechanical and electronic first-curtain shutter modes (with AF/AE tracking)—the fastest speed not just among all APS-C EOS cameras, but also in the EOS R series[1]. This is nearly equivalent to the EOS-1D X Mark III, Canon’s flagship DSLR, which shoots up to approx. 16 fps with the optical viewfinder.

Both cameras feature a RAW burst mode, which shoots full-resolution RAW images at up to 30 fps. The mode supports pre-shooting, which starts recording the scene up to 0.5 second before the shutter is released, aiding the capture of unexpected opportunities.

Both the EOS R7 and EOS R10 utilise newly developed APS-C CMOS image sensors that are 32.5 and 24.2 megapixels respectively. When combined with the DIGIC X image processing engine, they achieve image quality and visual resolution beyond what the megapixel count suggests. The visual resolution of the EOS R7 surpasses that of the EOS 90D and the EOS M6 Mark II despite having the same megapixel resolution, whereas that of the EOS R10 is equivalent to the same two cameras. Silky hair, fabric textures, and other fine details can be captured with precision and sharpness.

The EOS R7 is the first APS-C EOS camera to feature the sensor-shift type 5-axis In-Body IS (Image Stabilizer) mechanism, which can achieve up to 8 stops’ equivalent image stabilisation[3] during video and still image shooting. Both the EOS R7 and EOS R10 feature Movie Digital IS, which conducts 5-axis image stabilisation for steadier videos even with a lens that has no Optical Image Stabilizer (Optical IS).

For content creators particular about video quality, the EOS R7 can use 7K oversampling to record high-quality 4K UHD video at up to 30p in the new 4K UHD Fine mode. Uncropped 4K 60p recording is possible in 4K UHD Standard mode. It is also the first APS-C EOS photography camera to support the Canon Log 3 gamma, good for colour grading and HDR video production.

A strength of APS-C sensor cameras is their inherent telephoto effect, which is just like having a built-in extender. This will greatly benefit users who frequently photograph wildlife and other subjects that require longer focal lengths. The field of view is automatically “zoomed in” by about 1.6 times the focal length indicated on the lens. On the other hand, unlike using the 1.6x crop mode on full-frame EOS R cameras, recording uses the full resolution of the image sensor.

When shooting video on the EOS R7, the inherent 1.6x APS-C crop can be combined with the 4K UHD crop mode for an even stronger telephoto effect of around 1.8 times that of the focal length.

APS-C image sensors are roughly 40% the size of 35mm full-frame image sensors, allowing the camera and lens systems built around them to be smaller, lighter, more portable, and easier to handle. This also translates to better affordability.

By optimising material use and structural design, Canon has further reduced the weight of the cameras compared to their DSLR equivalents. The improvement in handling ease is multiplied when combined with one of the new RF-S kit lenses, which reduces total weight by as much as 24%.

Like the EOS R3, instead of the conventional hotshoe, both the EOS R7 and EOS R10 are equipped with a new Multi-Function Shoe. This supports high-speed communications and audio input, expanding the range of supported accessories beyond Speedlites. For protection against dust and moisture, the Multi-Function Shoe should be covered with the bundled Multi-Function Show cover ER-SC2 (available for purchase separately).

Cross-compatibility with RF and EF/EF-S lenses

Besides the RF-S lenses which were developed specifically for APS-C EOS R cameras, the EOS R7 and EOS R10 can also directly take RF lenses designed for full-frame cameras. This also applies for EF and EF-S lenses via the EF-EOS R mount adapters. When a lens designed for full-frame cameras is attached, the 1.6x telephoto effect will automatically be applied. The cameras are not compatible with EF-M lenses.

The EOS R7 and EOS R10 contain some new features and enhancements, which will streamline workflows and expand creative expression. These include a new Panorama Shot SCN mode and an improved Panning SCN mode with better image stabilisation to increase the chances of successful panning shots. In addition, a new in-camera Depth Compositing mode automatically merges focus bracketed images into an image that is clearly in focus from front to back. The EOS R7 also features a new auto-level function that automatically detects and rotates the image sensor to correct tilted images in still images and video, saving users the time and effort required to ensure a camera is level.

Debuting alongside the EOS R7 and EOS R10, the RF-S18-45MM F4.5-6.3 IS STM and RF-S18-150MM F3.5-6.3 IS STM are kit lenses intended as the first lens for new users of the EOS R system. With reduced size and weight due to the smaller APS-C sensor image circle, they are almost the same length and weight as their pocketable EF-M mount equivalents - while offering the benefits of the larger RF mount.

The RF-S18-45MM F4.5-6.3 IS STM is a standard zoom lens with a focal length range of 29-72mm in full-frame equivalent terms, offering a wide-angle to medium telephoto range suitable for capturing everyday moments. It is approximately 44.3mm long and weighs approximately 130g, similar to the EF-M15-45mm f/3.5-6.3 IS STM.

Meanwhile, the RF-S18-150MM F3.5-6.3 IS STM is a superzoom lens that covers a larger focal length range of 29-240mm in full-frame equivalent terms. A versatile all-purpose lens for travel, the extra reach makes it suitable for capturing distant scenery, casual sports and wildlife photography. in addition to daily life. It weighs only around 310g and is 84.5mm long, similar to the EF-M18-150mm f/3.5-6.3 IS STM.

Products will be available in stores from July 2022 onwards: