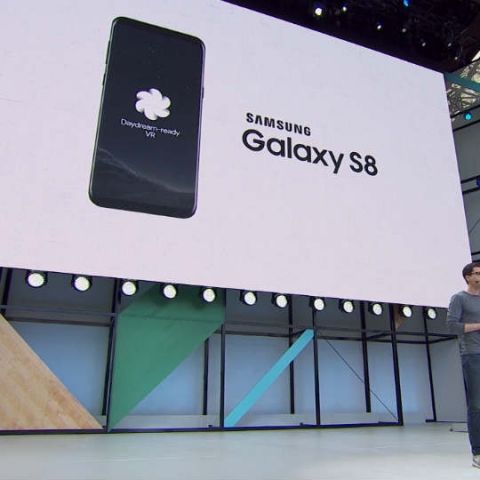 At its I/O event this year, Google has announced that Samsung’s current generation flagship smartphone, the Galaxy S8 and the Galaxy S8+ will receive Daydream support via a software update this summer. Further, it was also announced that LG’s upcoming flagship device will also come with support for Daydream. While Google’s head of VR/AR Clay Bavor, didn’t specify the name of LG’s upcoming device, it will most lively be the LG V30.

Previous reports had suggested that LG was planning to make the switch to OLED panels and Bavor’s announcement lines up with these reports. That’s because the requirements for Daydream mean that only devices OLED panels have made the cut. Besides this, the company also announced that it is working on standalone VR headsets for viewing daydream content. These headsets will not require a phone or a PC to be connected to the device. The headset will come with a technology called Worldsense, which offers positional tracking. The headset comes with inbuilt sensors which track the movement of the user’s head. The company worked with with Qualcomm to create the standalone Daydream headset reference design. The headsets will be manufactured by HTC and Lenovo.

To recall, Google unveiled its Daydream VR platform last year and improves upon Google Cardboard in almost every way. While almost all smartphones could be used with Cardboard, the company has set a basic hardware requirements for devices to be compatible with Daydream. Currently, only a few devices, such as the company's own Pixel series of phones support the VR platform. The company also has its own headset for the platform called Daydream View.