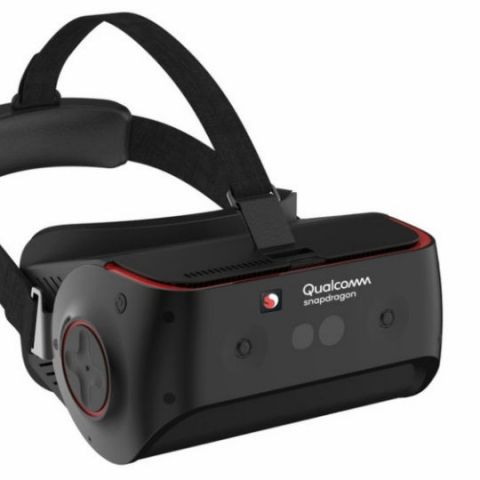 Qualcomm has revealed a new Mobile VR reference design based on its flagship Snapdragon 845 chipset. The Snapdragon 845 Mobile VR platform, successor to Snapdragon 835 Mobile VR, was announced by the chip-designer in Barcelona ahead of MWC 2018. Qualcomm’s standalone VR headset reference design based on Snapdragon 845 Mobile VR has some interesting new features such as foveated rendering, which combines graphics rendering with eye tracking to better gauge where the user is looking. It also including room scaling abilities using 6DoF (Degrees of Freedom) and Simultaneous Localisation and Mapping (SLAM) which will allow headsets based on the SD845 Mobile VR platform to track the body and location of users in a room without the need for cables or separate room sensors. This is a first for standalone Mobile VR headsets as the likes of HTC Vive and Oculus Rift use room sensors to achieve similar room scaling.

The Snapdragon 845 Mobile Platform uses the latest the Adreno 630 visual processing subsystem which provides for 30 percent faster graphics performance, 30 percent better power efficiency, and more than twice as much display throughput compared to the Snapdragon 835 Mobile Platform. It supports two 2400 x 2400 resolution displays at 120fps as well as 3D audio.

While Google will integrate SD845 Mobile VR in the Daydream, HTC will upgrade its existing Vive Focus standalone VR headset to the new platform. The Vive Focus, a China-only launch, is currently based on the Snapdragon 835 Mobile VR platform.

“HTC has consistently delivered VR experiences with the highest quality possible catering to the industry’s most discerning users,” said Alvin Wang Graylin, President HTC Vive, China. “By collaborating with Qualcomm and leveraging our internal hardware and software innovations, HTC has been able to deliver an uncompromising VR experience with the Vive Focus premium standalone VR headset.”

Oculus too has plans to utilise the new Mobile VR platform for future head-mounted displays.

Currently, there is no timeline for the launch of Snapdragon 845 Mobile VR based headsets, however we will be sure to check out the reference design at the Mobile World Congress 2018.