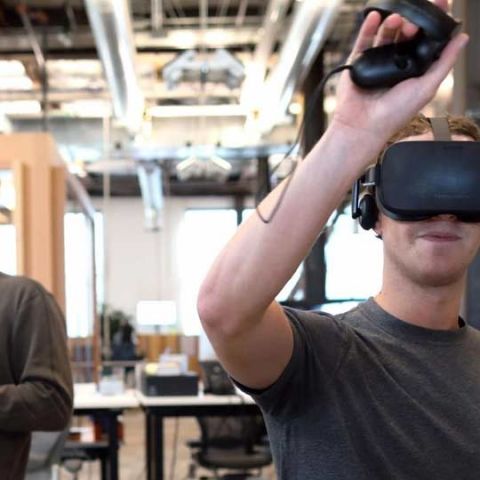 It looks like Mark Zuckerberg is ready to take the Oculus Rift and virtual reality gaming to the next level. Facebook’s CEO posted a pic of himself wearing the Oculus Rift this afternoon. In the post, he said, “Getting ready to demo something new we’ve been building in virtual reality,” and added that he would reveal the project at the Oculus Connect presentation the following day.

Zuckerberg has often commented on the many use cases for VR beyond just the realm of games and entertainment. In March 2014 he had said, “After games, we’re going to make Oculus a platform for many other experiences.” This was back when Facebook was acquiring Oculus VR. In the very same post, he added how one could enjoy a courtside seat at a game, and study in a classroom with students and teachers around the world. “By feeling truly present, you can share unbounded spaces and experiences with people in your life. Imagine sharing not just moments with your friends online, but entire experiences and adventures.”

He has a team of employees dedicated to working on creating those types of virtual reality experiences, where the “social” aspect is driven forward. The company had this to say about VR earlier this February:

We’ve created a Social VR team at Facebook focused entirely on exploring the future of social interaction in VR. This team will explore how people can connect and share using today’s VR technology, as well as long-term possibilities as VR evolves into an increasingly important computing platform. They’ll work closely with Oculus and other teams at Facebook to build the foundation for tomorrow’s social VR experiences on all platforms.

Facebook wants to enable more types of connections through VR. “Like the ability for friends who live in different parts of the world to spend time together and feel like they’re really there with each other.” We don’t know what the big reveal is yet, we’ll just have to wait for Zuckerberg and Facebook to let us know themselves at the Oculus Connect.