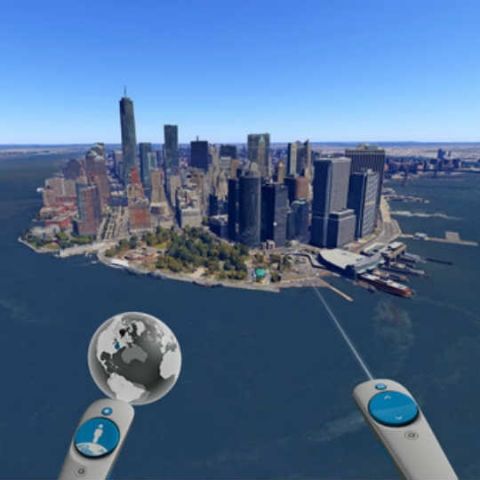 Google is releasing a virtual reality version of Google Earth for the HTC Vive. Google Earth VR allows HTC Vive users to explore cultural treasures, global landmarks and even seven wonders of the world by sitting at home.

Google Earth VR's experience is similar to the 2D interface but adds new perspectives to the user's viewing pattern. With Google Earth VR, HTC Vive users can freely fly around topographical regions, stand at the top of the mountains and even explore Earth from the space. There is even an option for guided tours of places like Manhattan and Tokyo Tower.

Google Earth VR wil stay exclusive on HTC Vive but Google says its evaluating other platforms. Google already has a much acclaimed Tilt Brush app available on Vive VR. The ideal place for Google Earth VR will be Google's very own Daydream platform, which is poised to expand several folds post excitement for other OEM partners.

However, Google Earth VR is just not perfect yet. The Verge calls it little rough with just flat maps and zero topography with trees appearing blocky. In VR mode, Google Earth VR shows virtual stand-in for both of the Vive's physical controller. The left shows a miniature globe highlighting the region user is currently exploring. Users can pan around with a virtual pointer emitted from the right controller. The controller helps to precisely pinpoint and navigate.

Google Earth VR is available for free starting today on Steam for the HTC Vive. The 9to5 Google says the app will be available on other platforms next year.