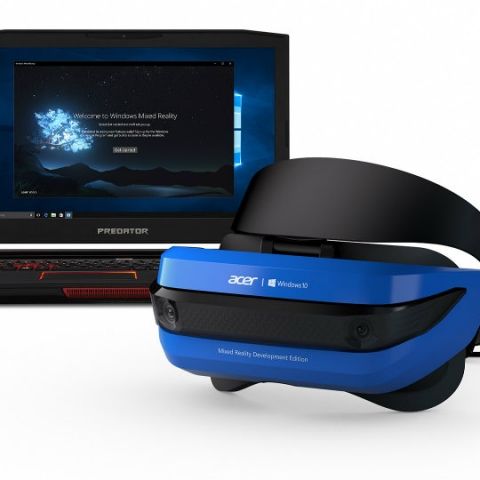 Microsoft has announced shipment of developer kits of its mixed reality headset. Made by Acer, the headsets will start shipping to developers from next month, and will serve as the standard development edition for the Windows Holographic Platform. The Acer-made edition is the first of many, as Microsoft has also partnered with Asus, Dell, HP and Lenovo for the same. The company plans to have robust software support for the headset ahead of its commercial launch, which seems to be quite some time away.

The headset will feature the inside-out tracking, thanks to which users will not be required to install external cameras and sensors. There are two cameras and six-degrees-of-freedom tracking. Two LCD displays have 1440x1440 pixels resolution, each, with 90Hz refresh rate. There is 3.5mm audio I/O, and an HDMI port to connect to PCs. The headset will only work with PCs running on Windows 10.

Such configuration makes it a very competitive product as compared to the current crop of PC-powered VR headsets, including the Oculus Rift. In addition, Microsoft has previously announced that the new mixed reality VR headsets will be priced upward of $299 (Rs. 20,000), thereby also making them comparatively more affordable than the competition. These may also be better value propositions than Microsoft's HoloLens.

It is also expected that Microsoft’s upcoming Xbox One S successor, dubbed Project Scorpio, will be compatible with these headsets. Microsoft will also be adding additional core features to the Windows platform to support VR and AR with the upcoming Creators update for the platform.